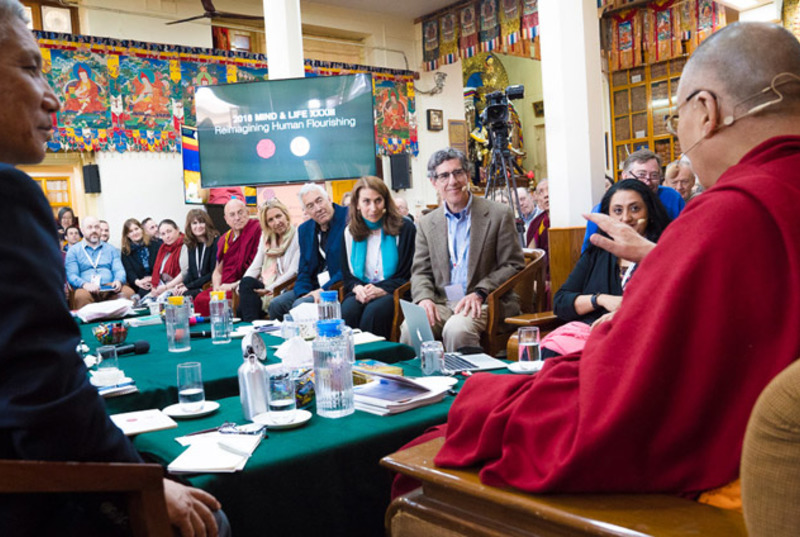 His Holiness the Dalai Lama addressing the participants at the Mind & Life conference on March 14, 2018. Photo: OHHDL

Dharamshala — “What we’re trying to do here is to educate people, to show them that the real way we’re going to become happy individuals, living in happy families and communities is to become more warm-hearted towards each other. We need more loving kindness," His Holiness the Dalai Lama said as the Mind & Life conference commenced for its third and fourth sessions on March 14 and 15.

Richard Davidson, today’s moderator, introduced the day, saying that after hearing about the basic science behind SEEL on the first day and seeing examples of it in action yesterday, today and tomorrow would be spent looking at key components of these programs. He introduced Amishi Jha and Sona Dimidjian who would talk about meta-awareness and attention training in their work, adding that Thupten Jinpa would finish up the session, appraising these topics from a Buddhist perspective.

First, Amishi Jha presented experiments to measure attention and meta-awareness involving superimposed images of a face and a house in which the participant is asked to pay attention to one or the other and answer questions about it. Another involved a boring series of faces flashed up with the occasional appearance of an upside down face. If the participant is paying attention, he or she can press a button to indicate seeing the upside down face, otherwise it shows their mind has wandered.

His Holiness joined in, saying, “When we talk about consciousness we have to distinguish between conceptual and sensory perceptual levels. When you are thinking seriously you don’t pay attention to your perceptual experience. This is something we have to educate people about. There is a need for a deeper understanding of the different levels of consciousness. If you don’t distinguish between sensory and mental levels of consciousness it just leads to confusion. This is why I sometimes suggest that compared to ancient Indian understanding of the workings of the mind, modern Western psychology is at a very preliminary level.”

Amishi Jha remarked that the ability to pay attention is an important element in mind training. However, on an ordinary level our ability to recognise when our mind has wandered is very poor.

Sona Dimidjian introduced her work with mental training in a clinical context. She works particularly with trying to prevent and relieve depression among pregnant women and mothers soon after delivery.

His Holiness observed that when someone is depressed even exposure to beautiful scenery fails to arouse their interest. On the other hand, someone who has peace of mind and inner calm as a result of their practice of compassion and understanding of emptiness tends not be so easily dispirited.

His Holiness also compared physical and mental well-being. "If your physical health is basically sound you can resist viral infection. Similarly if your mental health is sound, negative thoughts or experiences will not lower your morale. Since many people trust scientists, they have a responsibility to help the public understand the need for mental as well as physical health."

Thupten Jinpa spoke next about Buddhist views of attention and meta-awareness. After reciting the fifth chapter of Shantideva’s ‘Guide to the Bodhisattva’s Way of Life’—Guarding Alertness, he noted that Shantideva was interested in providing a framework for his monastic colleagues to follow a life based on altruism.

His Holiness added: “The Buddha himself emerged from the Indian traditions for training the mind. He spent six years practising austerities, but he wasn’t only fasting, he also engaged in deep meditation. He pursued practices that preceded him by maybe a thousand years. Nowadays I consider myself a messenger for ancient Indian thought, which was in many ways a tradition greater than the Buddha.”

In a subsequent free ranging discussion, during which His Holiness noted that mindfulness is necessary not only when you are cultivating single-pointedness, but in maintaining analytical meditation too, Amishi Jha asked, “Why does the mind wander in the first place?” He thought for a moment and replied, “One explanation is—that’s the way it is,” which provoked appreciative laughter. After reflection he added that it could also, for example, be a result of intelligence and a roaming curiosity.

The fourth morning session began on March 15 as His Holiness the Dalai Lama took his seat. Moderator, Dan Goleman, asked how he had slept. His Holiness replied that he felt a little tired, but had slept well. “Of course,” he remarked, “while I’m asleep, during dream time I do analysis. As far as I’m concerned a relaxing period of thoughtlessness is a waste of the potential of our brains.”

Goleman introduced the day's schedule, saying that Robert Roeser, Matthieu Ricard and Sona Dimidjian would talk about some of the research that is going on in relation to ethics and compassion in education. However, first of all, Goleman acknowledged His Holiness’s advocacy of secular ethics and asked what it means and why it is so important for the 21st century.

“The world is facing an array of problems,” His Holiness replied, “many of which we have created. People who make trouble were not necessarily trouble-makers when they were children. In fact, scientists say they have observed that basic human nature is compassionate. But if that’s so, why do we end up creating so many problems for ourselves?

“One reason is that we don’t have a holistic view, we only see things from a narrow perspective. If we were to take a broader view, the problems we confront wouldn’t seem so significant. Then we would be less irritated and angry. We also need to understand that if we act in this or that way, there will be consequences. Narrow minded people don’t seem to give any thought to the consequences of their behaviour. And we need to appreciate that we are all interdependent.

“Buddhism tells us that destructive emotions are rooted in ignorance. They are not supported by reason. Positive emotions on the other hand are based on reason. What’s more, negative emotions cannot co-exist with a wisdom that understands reality as it is. I’m a Buddhist, but I never say that Buddhism is best; I can even be critical of it. Great masters of the past like the Buddha, Mohammad and Jesus Christ, when they taught from their own experience, didn’t do so intending to prompt quarrels and disputes in the future. No matter how attractive Buddhism may seem, it will never appeal to all 7 billion human beings alive today.

“When we notice differences between us, we should treat them with respect instead of asserting that we are right. I have often said that this century should be an era of dialogue. We have to live together. We are all human beings. We need to focus less on the differences between us and engage in dialogue with each other.

“What we’re trying to do here is to educate people, to show them that the real way we’re going to become happy individuals, living in happy families and communities is to become more warm-hearted towards each other. We need more loving kindness. We can see even among animals that this is effective, that the calm dog has more companions and the barking aggressive one is by himself.

“Thinking of ourselves as somehow special isolates us. I don’t dwell on being the Dalai Lama, I think of myself as just another human being. And when I meet someone else I greet them as a brother or sister, which brings me joy. Shantideva is right to point out that self-centredness, being obsessed with ourselves, just brings us trouble.

“If we take a sense of universal altruism seriously, where is there room to have enemies? Our real enemies and the enemies of humanity are negative emotions like anger and hatred. Indeed, people who are dominated by powerful negative emotions should be objects of our compassion.

His Holiness turned to Dan Goleman and asked if he had spoken for too long. He laughed as he told him that while he may be tired, once he opens his mouth he finds it difficult to stop talking.

The morning presentations commenced, and Sona Dimidjian recalled His Holiness's own words: “Love and compassion are necessities, not luxuries. Without them, humanity cannot survive.” Dimidjian asserted that just as achieving well-being is an urgent public health need, so too is eradicating selfishness.

The five day conference will conclude in its last session, March 16.