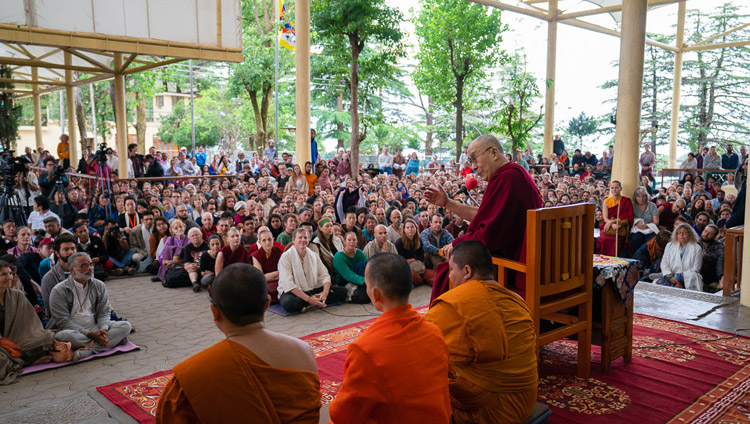 His Holiness the Dalai Lama addressing the crowd of tourists from over 68 countries and India gathered at the Main Tibetan Temple courtyard in Dharamsala, HP, India on April 16, 2018. Photo by Tenzin Choejor

Dharamshala, India - “Today, the world is faced by a crisis of emotions and I believe the ancient Indian knowledge of the workings of the mind can be of great value in tackling them. I came to realize how valuable this knowledge could be for achieving peace of mind," His Holiness the Dalai Lama said while explaining it also requires self-confidence and determination, for which it’s important to be honest and truthful.

His Holiness the Dalai Lama was in a jovial mood as he emerged from his residence this morning. He greeted more than 1500 visitors from 68 countries who had gathered in the temple courtyard, shaking hands with some, teasing and exchanging a few words with others. He gradually made his way round the yard, stopping to pose for photographs with people grouped according to their geographical origins, before sitting down on a chair in the porch under the temple.

“For some time I’ve thought that when there are brothers and sisters from different countries here,” he told the crowd, “just seeing my face is not sufficient. I want to show how brilliant my brain is by talking to them.

“We Buddhists pray for the welfare of all sentient beings, but we have to think about what that really means. Whether we think about animals, insects or fish, there’s not much we can really do for them except pray. However, the 7 billion other human beings on this planet are like us. They have the same kind of brain as we do. Realistically, they are the only ones we can really help.

“Scientists say that basic human nature is compassionate, which is good because if it were angry there’d be no hope. What’s more, scientists have observed that constant anger, fear and hatred have the effect of undermining our immune system, whereas cultivating a compassionate heart is much better for our health. This is why it’s important that we use our brains to promote such values.

“Young children don’t care about differences of nationality, faith or religious denomination. If their companions smile, they play with them. Our education and social system seem to change this and as we grow up we learn to make distinctions about where people belong and what they believe. Here in India, for example, there is the so called caste system and the time has come to acknowledge that the Indian constitution gives all citizens equal rights so there is no room for discrimination on the basis of caste—we are all brothers and sisters.

“Today, the world is faced by a crisis of emotions and I believe the ancient Indian knowledge of the workings of the mind can be of great value in tackling them. When I began to study these things by memorizing classic texts that I didn’t yet understand I was reluctant and lazy. However, later on I came to realize how valuable this knowledge could be for achieving peace of mind. It also requires self-confidence and determination, for which it’s important to be honest and truthful.

“Mentally and emotionally we human beings are all the same. We all experience anger and hatred, even me too, but we also all have the potential to cultivate compassion, forgiveness and tolerance. Destructive emotions are based on ignorance, an observation supported by my friend, cognitive therapist Aaron Beck, who describes the negative judgements arising from anger as 90% mental projection. Constructive emotions like love and compassion are supported by reason, so we can use our brains to develop and strengthen them.”

Looking across to a group who have been learning about Buddhism at Tushita, a local meditation centre, His Holiness advised them to pay attention to the ‘Guide to the Bodhisattva’s Way of Life’ composed by the great Indian master Shantideva. He highlighted chapters six and eight as useful in countering anger and self-centredness and suggested that people who are not Buddhists could also benefit from reading them. He observed that reading this book repeatedly since he first heard it explained in 1967 had helped him transform his own mind.

His Holiness remarked that modern education is oriented towards material goals rather than inner values, which has influenced whole generations. By contrast, ancient Indian traditions, even before the time of the Buddha, had a rich understanding of the workings of the mind and emotions as a result of practices for cultivating a calmly abiding mind (shamatha) and insight (vipashyana). His Holiness told his audience that they too could develop mental qualities if they steadily came to understand the workings of the mind and emotions. He noted that by learning to tackle the emotions it’s possible to defend your peace of mind and inner strength.

“Brothers and sisters,” he continued, “please pay more attention to your inner world, learn to counter your negative emotions and transform your mind. When one individual has developed peace of mind and shares what they’ve learned with others it has an impact. You might look at the problems in the world and think that there’s not much you can do about them. Remind yourselves that individuals can make a difference. Cultivating positive qualities in day to day life can create the conditions for humanity to live more peacefully. This is a practical approach.

“Today, we see too much emphasis on secondary differences between individuals and groups of people leading to divisions between ‘us’ and ‘them’. When this happens we need to remember the oneness of humanity. This is one of the areas in which we need to introduce inner values into modern education. If we are to make this 21st century different from the 20th century in which more than 200 million died violently, we have to take steps now. And if we make the effort in about 30 years you’ll see the world has changed.

“That’s what I have to say. I’m 82 years old now. At the age of 16 I lost my freedom and at 24 I lost my country. I’ve faced difficulties my whole life, but I’ve come to understand that it’s when we’re most tested that we are especially able to learn. Through inner transformation, as individuals, we can develop peace of mind. To achieve social change we need to improve education.”

Responding to a question about his potential return to the Potala Palace, His Holiness stated that more important is working to preserve Tibetan language and culture, which in turn has kept alive ancient Indian knowledge such as the traditions of Nalanda University. He explained that the more than 300 volumes of the Kangyur and Tengyur, translations of Indian literature into Tibetan, contain philosophy, psychology and logic that continue to have relevance and value today.

His Holiness expressed admiration for vegetarianism, and declared that the kitchens of Tibetan monasteries and other institutions in exile are largely vegetarian. However, he also explained that Buddhist monks’ traditional dependence on alms prevented them from expressing preference. Therefore, they are neither vegetarian nor non-vegetarian.

Finally, asked to clarify what he meant when he declared that compassion is not a luxury, but a necessity if we are to survive, His Holiness pointed out that science and technology have given human beings an immense power of destruction. At the same time reality has changed and people are now more interdependent than ever before. Climate change, for example, is a threat that affects everyone and which can only be addressed by everyone working together. There is an urgent need to be realistic and understand that since problems can’t be solved by the use of force, the only alternative is to seriously engage in dialogue.