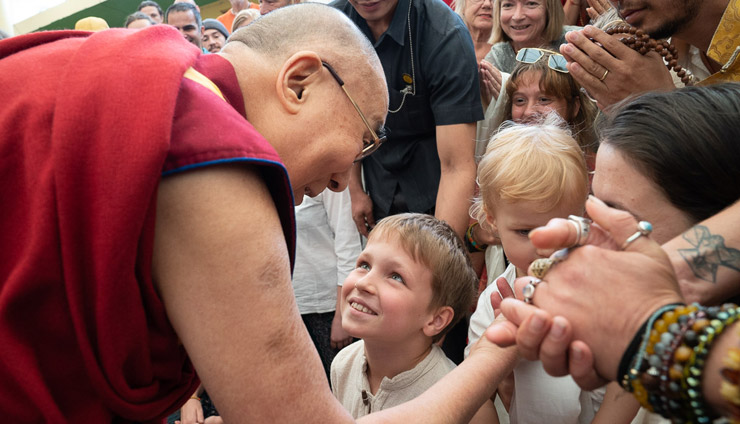 His Holiness the Dalai Lama greeting younger members of the audiences from around the world at the main Tibetan temple in Dharamsala, HP, India on May 19, 2018. Photo: Tenzin Choejor

Dharamshala, India — The spiritual leader of Tibet, His Holiness the 14th Dalai Lama urged a “oneness of humanity” Saturday in a talk before hundreds of international guests at the main temple in Dharamshala, India, and said all major religious traditions are "dedicated to conveying the same message—peace and happiness among all humanity."

His Holiness the Dalai Lama Saturday met with hundreds of people from different countries in the world. Visiting the Kalachakra Temple at the Tsuglagkhang to pay his respects, he first greeted Tibetans who have gathered to take part in prayers and recitations of a special prayer, to celebrate the month in which the Buddha was born, enlightened and passed away.

Back in the temple yard, he addressed the international visitors: "I hope this meeting will allow us to interact with one another—I look forward to hearing your questions.

"In the past, although we Tibetans traditionally prayed for the welfare of all sentient beings, we weren’t really concerned with what happened in the rest of the world, remaining isolated behind the mountains that surround our land. However, the reality today is that we are all so interdependent, trying to preserve such isolation is inappropriate and out of date. We need instead to think of the oneness of humanity.

"Regarding other human beings as like our brothers and sisters can make our lives much happier and more meaningful. Some people think that when we cultivate compassion and affection for others only they benefit, but, in fact, we ourselves derive great benefit and satisfaction from such conduct.

"There may be living creatures in other parts of the universe, but we can do nothing for them. And although we share this planet with an infinite number of birds and other creatures, it is really only human beings we can benefit and communicate with.

His Holiness observed that in the 60 years he has lived in exile in India, he has been impressed to see how all the world’s major religious traditions live together here in harmony. He praised this as an example to the rest of the world. Despite maintaining different philosophical points of view, all these traditions are dedicated to conveying the same message—peace and happiness among all humanity. This is their common goal.

In answering several questions from the audience His Holiness mentioned how much he has valued the discussions he has held with modern scientists over the last 30 years, touching on cosmology, neuro-biology, physics and psychology. He concluded:

"If you have some regard for me, please think over what I have been talking about and see how you might implement it in your life. Try to promote a sense of the oneness of humanity where you live, as well as a sense of mutual respect and appreciation among our different religious traditions. Nevertheless, if you think what I’ve said has little relevance to you, that’s all right, you can just forget it.”