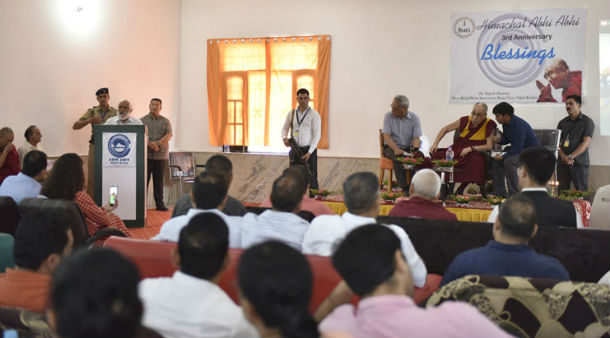 Dharamshala, India — Explaining the whole Buddhist world is follower of one of the Indian tradition, the spiritual leader of Tibet, His Holiness the Dalai Lama Saturday said the ancient Indian knowledge helps to tackle negative emotions and could help to contribute to world peace.

Addressing a gathering in Kangra city in Indian state of Himachal Pradesh, to the third founding anniversary of Himachal Abhi Abhi, local News Network, Balaji Media Communications, on June 2, 2018, His Holiness highlighted the relevance of India in the Buddhist world and said if the country takes lead in combining its ancient knowledge of emotions and spiritualism with modern education, India will become inspiration for many Buddhist countries.

“All these knowledge coming from Nalanda is Indian tradition. The whole Buddhist world is follower of one of the Indian tradition. If India takes lead in combining its ancient knowledge of emotions and inner world with modern education, I think many Buddhist countries will follow including China,” His Holiness said at Kangra while addressing the 3rd founding anniversary of Himachal Abhi Abhi, a local News network.

“Indian tradition offers the possibility of utilising human intelligence fully and therefore, it can make significant contribution to world peace. Firstly, we must revive this tradition, not through ritual and prayer, but through education," the Nobel Peace laureate said.

“Now in this country, over three to four thousand years, different spiritual traditions developed. Regardless of whether it is Jain, Buddhist or Hindu philosophy, all have a common practice of Samadhan, single pointed meditation and Vipassana, analytical meditation; both of which involve mental training. Analytical meditation is something like a weapon to tackle destructive emotions,” he said.

“Ancient India had a highly developed understanding of the depth of mental consciousness. In my discussions with modern scientists, I’ve learned about a great deal about Quantum Physics. However, the Indian nuclear physicist Raja Ramana once told me that concept of Quantum Physics was discovered centuries ago in ancient Indian texts,” His Holiness said.

Referring to the global rise in religious conflicts and violence, he offered India as the shining example of religious tolerance, ahimsa and secular tradition of respect for all believers and non-believers.

“India’s religious tolerance is remarkable. The world needs this value. India’s message of tolerance, Ahimsa, Karuna and religious harmony is very relevant to today’s world”, His Holiness mentioned, saying that one of his lifelong commitment is to revive this “ancient yet scientific” tradition in modern India by incorporating it in the education system.

“We have around 10,000 monks and few thousand nuns who have spent more than 20 years studying the texts of the ancient Indian tradition. These are the sources to help you. Hence, my fourth commitment is the revival of ancient Indian knowledge in modern India.

“Once it is successfully revived in the country, then you can serve the outside world,” His Holiness said.

His Holiness further mentioned his meeting with Principal of Dharamshala Government College and said that a training of Indian teachers in Ancient Indian logic, psychology and science of mind is in the pipeline.

Commenting on the role of media, His Holiness said, “The role of media is to objectively inform and educate people, based on truth and facts. Today when our world is by and large highly developed and interdependent, the ancient Indian philosophy of Ahimsa and Karuna are highly relevant, which will enable people to live in a happy society”.

During a question-and-answer session, His Holiness commented on the Tibetan issue. “Regarding the political change, that is difficult to say. China is historically follower of Nalanda tradition. Now many Chinese university scholars describe Tibetan Buddhism as an authentic Nalanda tradition and some Chinese scholars out of interest to study Tibetan Buddhism want to learn Tibetan language."

"Of course those Chinese who appreciate Tibetan Buddhism are very sympathetic towards Tibetan problem. China is not democratic but totalitarian system, so we will see how much change; it is difficult to predict”, His Holiness added.