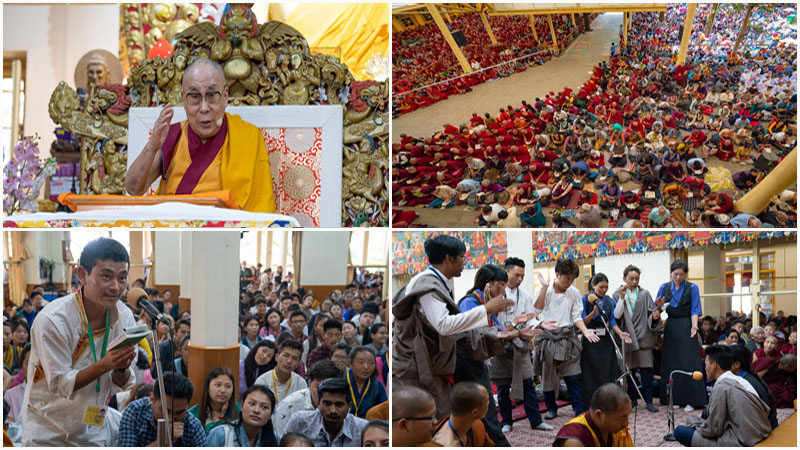 His Holiness the Dalai Lama during his three day teachings for Tibetan youth at the Main Tibetan Temple in Dharamsala, HP, India on June 6-8, 2018. Photo: Tenzin Phuntsok

Dharamshala, India — The spiritual leader of Tibet, His Holiness the Dalai Lama concluded his three-day teaching on Shantideva's "A Guide to the Boddhisattva's Way of Life" at the main Tibetan temple in Dharamshala, India on Friday, June 08, 2018.

The estimated 9000 people included 900 college students, 112 students from the Men-tsee-khang, 105 students from the Tibetan Transit School, nearly 1400 students from TCV schools—mostly from classes 9-12, 250 from the Dharamsala Buddhist Study Group, more than 2000 interested people from abroad, including 150 Thai monks from the Thai Dhama-Sala Charitable Society, and local Tibetans.

In the first day of the teaching, members of the Dharamshala Buddhist Study Group, comprising men and women, monastics and lay-people, Tibetans and people from abroad, demonstrated their debating skills. The first group discussed the aspiring and venturing awakening minds as described in the ‘Guide to the Bodhisattva’s Way of Life’. The second group explored modes of reasoning as revealed in Dharmakirti’s ‘Commentary on Valid Cognition’ (Pramanavarttika).

While addressing the gathering after dispensing with a long recitation of prayers, His Holiness said: “We’ve been holding teachings for young Tibetans at this time of year when children from distant schools and colleges could also attend for several years now. So students and school children are the main disciples on this occasion, but I am also glad to welcome monks from Thailand."

The Buddhist leader mentioned the array of religious traditions preserved in India, some indigenous like the Samkhya, Jain and Buddhist traditions and the Abrahamic traditions like Judaism, Christianity and Islam from elsewhere. All these traditions emphasize altruism. They teach about love and compassion.

He conceded that there are philosophical differences among these various traditions—some are classified as theistic, believing in a creator god, while others are not. One branch of the Samkhyas, Jains and Buddhists do not assert a creator, but among them only Buddhists deny the existence of a self independent of the psycho-physical aggregates.

The spiritual leader remarked that among different Buddhist schools of thought, all assert a selflessness of persons, that there is no single, independent self functioning like a controller of the aggregates. However, only some, the Mind Only and Middle Way Schools, also speak of a selflessness of phenomena.

Declaring that the ultimate view of emptiness was explained by Nagarjuna, His Holiness asked what the purpose of such philosophical ideas might be. In answer he quoted Nagarjuna,‘Through the elimination of karma and mental afflictions there is liberation; Karma and mental afflictions come from conceptual thoughts and these come from mental elaborations. Elaboration ceases through emptiness.’ The point is to eliminate distorted views that give rise to disturbing emotions.

“In today’s world people abuse and kill each other, despite scientists observing that basic human nature is compassionate,” His Holiness observed. “One reason seems to be that modern education is more focussed on achieving material development than on cultivating our basic human inclinations towards compassion," he said.

"The great scholar Shantarakshita encouraged the translation of Indian Buddhist literature from Sanskrit into Tibetan as we see reflected in the colophon to the ‘Guide to the Bodhisattva’s Way of Life’, which shows that three different teams of scholars and translators, at different times, worked to refine the edition we have today."

“Although I respect all religious traditions for the message of love and compassion they convey, it is on the basis of the philosophical insights and the tools of reason and logic provided by such scholars as Shantarakshita and Kamalashila that we Buddhists are able to engage in mutually beneficial dialogue with modern scientists.

“The foremost scholar of the Nalanda Tradition was Nagarjuna,” were His Holiness' opening words in the second day of the teaching. “His writings reveal what a great master he was, precise and profound. His Holiness said, “Nagarjuna praised the Buddha, not only for attaining enlightenment, but also for teaching dependent origination. As the final homage at the end of ‘Fundamental Wisdom’ says the Buddha taught the holy Dharma to rid us of all distorted views."

“Our intelligence is deluded by distorted views to uproot which the Buddha first taught the Four Noble Truths beginning with true sufferings and true origins. Detailed explanations of the Four Noble Truths include accounts of the Twelve Links of Dependent Origination," he said, adding: "These are sometimes illustrated as the outer ring of the Wheel of Life that can often be found painted on temple verandas."

“We all want happiness, not suffering. And yet, because of ignorance, we are beset by problems. In illustrations of the Twelve Links, the first, ignorance, is depicted as a blind, old woman. The second, volitional activity, is shown as a potter shaping a vase on a wheel.

“Our experience of pain and pleasure comes about as a result of our wholesome and unwholesome actions. The painting includes an inner ring that is half black, alluding to unwholesome actions and half white that indicates wholesome deeds. Many of our actions result from mental afflictions—ignorance, attachment and hatred—illustrated in the centre by a pig, a rooster and a snake respectively.

“All religious traditions regard peace of mind as important. Developing it requires working with our inner world. According to some traditions this involves submitting to God envisaged as infinite love—an approach to peace of mind that depends on faith. Many Indian traditions, however, employ techniques for cultivating a calmly abiding mind and insight (shamatha and vipashyana) to achieve mental peace.

“The Buddhas uproot ignorance and lead beings to liberation by teaching about reality. They don’t wash away wrongdoing with water, nor do they remove suffering with their hands. The historical Buddha observed that each of us is our own master, implying that we can overcome suffering by eliminating ignorance from our own minds. No one else can do it for us.

“In tackling disturbing emotions we need to use our intelligence and our ability to communicate through language," His Holiness told the crowd gathered in Dharamshala, during the final day of his three-day teachings.

“The root of suffering is being driven by self-centred attitudes and clinging to our misconception of independent existence. These will create trouble as long as they remain within us. This is why we need to recognise the faults of self-cherishing and the advantages of concern for others. At the start of our lives, our mothers give birth to us and nurture us in their care. When we’ve grown up, to be confined by ourselves makes us uneasy. We’re much happier in the company of others, which is why all religious traditions emphasize the importance of love and compassion.”

Students from Sherab Gatsel Lobling School, followed them with a debate presentation focussing on the permutations of karma and what defines an action as wholesome or unwholesome. Among the questions they raised during the final of his three-day teachings: How self-immolation could be considered? His Holiness immediately took up the point: “Yesterday the book we are reading touched on this point, that where it is motivated by compassion and for the benefit of others, the Buddha has permitted actions to be taken that are otherwise forbidden. I don’t know whether we can therefore say that self-immolation is a wholesome deed."