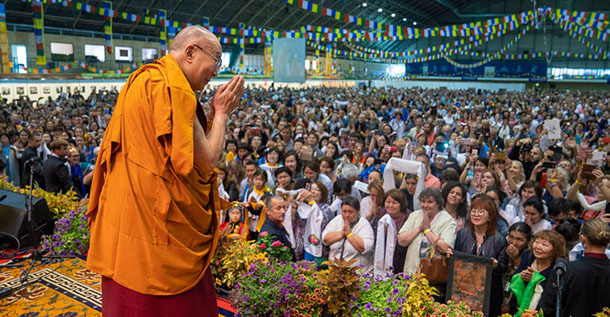 His Holiness the Dalai Lama greeting the audience on his arrival on stage at Skonto Hall in Riga, Latvia on June 16, 2018. Photo by Tenzin Choejor

Riga, Latvia — 'Everyone wants happiness and no one wants suffering, since anxiety and fear are at the root of suffering, what we really need to achieve is peace of mind,' His Holiness the Dalai lama said, while citing scientists have found evidence that basic human nature is compassionate."

At the Skonto Hall in Riga, Latvia, 4,000 people gathered to listen to the talk of His Holiness the Dalai Lama, on on June 16, 2018. A short flight over the Baltic Sea brought the spiritual leader of Tibet to Latvia, on Friday, June 15, 2018. His Holiness the Dalai Lama was welcomed at Riga Airport by the local Latvian and Russian organizers of his visit. A large group of well-wishers were waiting to greet him at his hotel—he smiled, waved and shook hands with as many of them as he could.

Friday morning at the Skonto Hall, which is once again the teaching venue, His Holiness first met with more than 40 members of the media gathered in an anteroom. After making a very brief statement, His Holiness took their questions.

Asked how to feel confident of making correct decisions, His Holiness replied by saying, “We human beings have a sophisticated intelligence which we must learn to use properly. Our decisions and consequent actions should not be taken simply on the basis of what we want. Although such an approach might provide some short-term satisfaction, we’d be little different from animals."

"As intelligent human beings we also have the ability to reason and anticipate the consequences of our actions. We can assess whether what we do will be socially acceptable and whether it is good for our health or not. We have to take the larger reality of any given situation into account. Looking at things from only one angle is not enough. Examining things from different angles objectively without too much emotion will lead to a better result,” he added.

To a question about competition and whether he had a favourite team to win the World Cup, His Holiness responded by saying, “I feel that competition that results in everyone involved reaching the top can be regarded as healthy and positive. However, if it entails putting obstacles in your rivals’ way, it’s not so good.

“Personally, I have little interest in sport, so I have no favourite team. When I was young I played a bit of badminton and ping-pong. In Beijing, in 1954/55, I played ping-pong with the Chinese Prime Minister, Zhou En-lai, but my motivation was poor—because he had a minor disability I thought it would be easy for me to win,” the spiritual leader added.

As His Holiness took the stage in the larger hall, a capacity crowd of 4000 people took to their feet, cheering and waving silk scarves in welcome. The ‘Heart Sutra’ was recited in Latvian. He began by saying to them, “I am very happy to be here once more in Riga,” His Holiness began. It seems that many people from the Russian Republics have also come. We are all followers of the same Nalanda Tradition, so I feel it is my duty to explain it to you."

“Everyone wants happiness and no one wants suffering. In that we are all equal. However, despite out not wanting suffering, it seems that we run after it. Although we can take steps to overcome physical distress, since anxiety and fear are at the root of suffering, what we really need to achieve is peace of mind. Scientists say they have found evidence that basic human nature is compassionate, so it’s common sense that whatever faith we may follow, the root of peace of mind is warm-heartedness.”

His Holiness explained that a key element of the Nalanda Tradition, which has been kept alive in Tibetan Buddhism, is its use of logic and reason. This approach was introduced to Tibetans by the great Nalanda Master Shantarakshita, who was invited to the Land of Snows by the Tibetan emperor in the 8th century. He said that “we develop destructive emotions such as anger and attachment on the basis of ignorance."

"To counter that the Buddha spoke of the Two Truths—conventional and ultimate truth. He pointed out the gap between appearance and reality. Different Buddhist schools of thought present different interpretations of the Two Truths, but Nagarjuna taught that we will only eliminate fundamental ignorance by coming to understand emptiness of intrinsic existence in the context of dependent origination—the notion that things only exist in dependence on other factors.

“As Buddhists our practice should be founded on understanding, not blind faith alone, and to achieve understanding we need to learn. In Tibet, in the past, monks were only regarded as learned when they had studied 20 to 30 years. In India today, monks study at least 20 years. I respect all religions, but what distinguishes Buddhism is that the Buddha advised his followers not to take what he said at face value, but to examine and investigate it in the light of reason. Buddhism is the only tradition to adopt such a sceptical approach.”