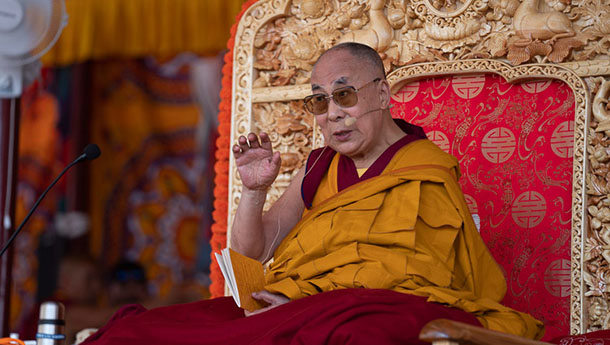 His Holiness the Dalai Lama addressing the crowd during his teaching in Diskit, Nubra Valley, J&K, India on July 13, 2018. Photo by Tenzin Choejor

Diskit, Ladakh, J&K, India — His Holiness the Dalai Lama, currently in a 19-day teaching tour in Ladakh said that we can enjoy watching beautiful and captivating events, but if we compare these sensory experiences with peace of mind, the mental experience is stronger and more lasting.

“Here I am in Nubra once again,” he remarked. “Today, I’m going to lead the generation of the awakening mind of Bodhisattva, something I do myself every day, and also give some guidance on meditating on emptiness,” the spiritual leader of Tibet said while addressing a crowd during his teaching in Diskit, Nubra Valley, J&K, India on July 13, 2018.

His Holiness digressed to advise monks and nuns sitting before him that when the sun got too hot they should cover their heads with their upper robes. He instructed lay people likewise to put on hats or raise umbrellas.

“Those of us gathered here, whether we follow religion or not, whether we count ourselves Buddhist, Muslim, Christian or Hindu, we are first of all human beings. Our religious identity is secondary. We may pray for the welfare of all sentient beings, but in practical terms it is our fellow human beings we can actually do something for. Animals, birds and insects surround us, yet there is little we can do to teach them. Language enables us to share our experience of love and compassion with other people.

“All beings, including the 7 billion human beings, want happiness and don’t want suffering. This is a matter of our state of mind. We have five sensory consciousnesses, but it’s the sixth, mental consciousness, that holds the key to pain or joy. We can enjoy watching beautiful and captivating events, listen to moving music, smell pleasing fragrances, taste delicious food or revel in the pleasure of touch, but if we compare these sensory experiences with peace of mind, the mental experience is stronger and more lasting.

“I met a Christian hermit in Spain who had spent five years in the mountains meditating on love. He subsisted on tea and bread and almost no other physical comfort, and yet the sparkle in his eyes revealed the deep joy that filled his mind. Without peace of mind, happiness will elude you.

"If have peace of mind, nothing will disturb you. Anger, arrogance and jealousy destroy inner peace; love and compassion restore and strengthen it. This is why love, compassion, contentment and tolerance are practices common to all religious traditions—they bring peace and happiness to human beings.

His Holiness discussed how theistic religions believe in a creator God and consider such a God to be filled with infinite love and mercy. Non-theistic traditions like one branch of the Samkhyas, the Jains and Buddhists consider the source of happiness to be in our own hands.

He said this is why the Buddha stated that the Buddhas do not wash unwholesome deeds away with water, nor do they remove the sufferings of beings with their hands, neither do they transplant their own realization into others.

“As a follower of the Buddha, belonging to the Nalanda Tradtion,” His Holiness continued, “someone who has undertaken study, contemplation and reflection, I feel we should have a concern for all human beings, since we all seek happiness. In addition, we should promote harmony among our religious traditions, which are a source of human benefit, despite adopting different philosophical positions.

After all, there are differences of stance between the Middle Way and Mind Only schools within the Nalanda Tradition, but they aren’t grounds for fighting or quarrelling. In the end all these traditions commend the practice of love and compassion.

“Over the last nearly forty years or so I have had extensive discussions with modern scientists. Some of them say, citing evidence from experiments with pre-verbal infants, that basic human nature is compassionate. Further evidence suggests that compassion strengthens the immune system, whereas anger and hatred undermine it.”

His Holiness asked the school-children in the audience if they preferred to see people laughing together or quarrelling and running away from each other. He then remarked that although there are some people, who, seeing a fight, want to join in, by and large seeing other people happy makes us happy too.

He noted that we human beings are social animals for whom friendship is a condition of happiness. But to make friends requires trust. Compassion predisposes us to avoid being dishonest and deceiving others—a fundamental component of trust.

His Holiness also observed that in relation to achieving happiness, material development alone is not enough. Inner values like love and compassion are crucial too. These are related to methods for transforming the mind that have grown from the common Indian practices of shamatha, cultivating a calmly abiding mind, and vipashyana, which involves developing wisdom and insight.

“Just as we exercise and keep ourselves clean to remain physically fit, we also need to train the mind and tackle our disturbing emotions if we are to be mentally fit too.”

In response to His Holiness’s request, members of the audience held up copies of the texts he was going to teach, which had been made available in Tibetan, English and Chinese. He clarified that the first, ‘In Praise of Dependent Arising’, praised the Buddha not for his physical qualities, but for his having taught dependent arising.

He mentioned that in his first series of teachings, dealing with the Four Noble Truths and so forth, he introduced that concept of causality as illustrated by the twelve links of dependent arising. These start with ignorance and end with aging and death. Ignorance enmeshes us in unenlightened existence, but to overcome it leads to liberation.

To answer what is the purpose of looking for the reality of things, Nagarjuna observed, “Through the elimination of karma and mental afflictions there is liberation; karma and mental afflictions come from conceptual thoughts and these come from mental fabrications. Fabrication ceases through emptiness.” The point being to eliminate distorted views that give rise to disturbing emotions.

When Nagarjuna’s Middle Way School of Thought asserts that things do not exist truly, it means they do not exist as they appear, that is as intrinsically existent. ‘In Praise of Dependent Arising’ begins by lauding the Buddha as an unparalleled teacher because of his instructions about dependent arising—that things are not independent but exist merely as designated.

In the course of reading through the verses, His Holiness recommended that if his listeners found them interesting they should also read Nagarjuna’s ‘Fundamental Wisdom of the Middle Way’ and his ‘Precious Garland’. A little further on he also recommended Bhavaviveka’s ‘Lamp of Wisdom’ and ‘Blaze of Reasoning’, besides Chandrakirti’s ‘Clear Words’.

After glossing both ‘In Praise of Dependent Arising’ and the ‘Eight Verses of Mind Training’, His Holiness led the assembly in the ‘All-encompassing Yoga’, which introduces an experience of altruism and emptiness.

His Holiness mentioned that realization of emptiness contributes to the accumulation of wisdom and cultivating altruism contributes to the accumulation of merit. Since these ultimately result in the two bodies of a Buddha, it’s important to reflect on them daily. Acknowledging that, although the texts he’d been dealing with were Buddhist, there were both Muslims and Buddhists in the audience, His Holiness concluded that altruism would benefit them all.