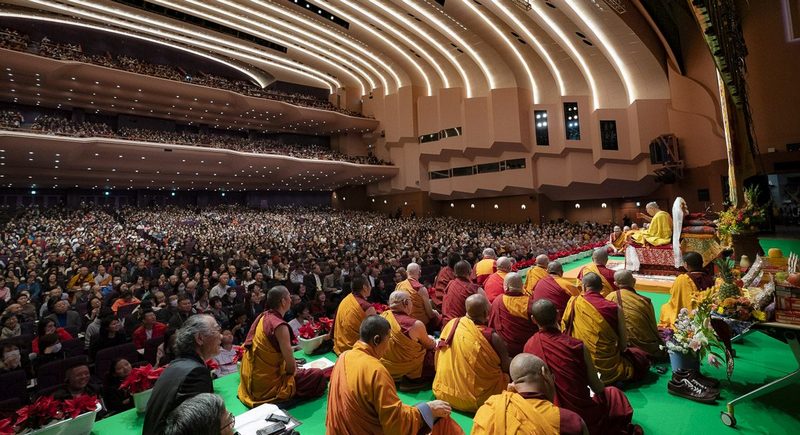 His Holiness the Dalai Lama addressing the capacity crowd of 5000 at the Pacifico Yokohama National Convention Hall in Yokohama, Japan on November 14, 2018. Photo by Tenzin Choejor

Yokohama, Japan — For a happy life, physical well-being is important, but true wellness must include a happy mind, which can be achieved by treating others with trust and affection- whether religious or non-religious - was one major message in a talk by His Holiness the Dalai Lama to a strong crowd of 5000 at the Pacifico Yokohama National Convention Hall in Yokohama, Japan, on November 14, 2018.

The other topic raised by the Buddhist spiritual leader was the logical approach to the study of philosophy and psychology, an approach that has allowed a fruitful dialogue to develop between Tibetan Buddhist scholars and contemplatives, and scientists.

His Holiness the Dalai Lama arrived at the teaching venue ,Pacifico Yokohama National Convention Hall in Yokohama, Japan on November 14, 2018, Wednesday early morning. He encouraged those reciting the ‘Heart Sutra’ in Japanese to begin and when they had finished addressed the capacity crowd of 5000—Japanese, Taiwanese, Koreans, Mongolians, Russians and Chinese from across East Asia.

“Here I am once again in Japan, happy to be among old friends and so many people from other countries too—I greet you all. You’ve not come here just for fun, but to listen to Buddhist teachings. This 21st century is a time of great technical development when people talk about creating artificial intelligence. I imagine they can create devices that emulate sensory consciousness, but they’re a long way from reproducing mental consciousness. Still, this is a time when we might ask if religion is still relevant.

“All 7 billion human beings alive today want to be happy; they don’t want to suffer. We are assailed by increasing natural disasters that we can’t do much about, but wholesale killing, the starvation of innocent and the neglect of the poor and needy are troubles people are responsible for. Worst of all is killing in the name of religion. We all want to look after ourselves, but when we were born we were nurtured by our mothers. Evidence from experiments with infants before they can talk has led scientists to conclude that basic human nature is compassionate.

“Scientists have also found that while constant anger and fear undermines our immune system, having a compassionate attitude reinforces it. Families whose members treat other with trust and affection are happy, whereas those who are suspicious and jealous are unhappy. Love and compassion bring people together—anger drives them apart.

“Material development and physical comfort alone don’t relieve unhappiness, but if you are relaxed and have peace of mind, whatever goes on around you, won’t upset you. It isn’t the sophistication of the devices we own that brings us peace of mind, it’s human qualities like love and compassion. These qualities, along with tolerance, contentment and self-discipline, are what all religions teach about; therefore we still need religion today.

"Our different traditions may take different philosophical positions, but they are all directed towards cultivating love and compassion. Of my many Hindu, Jain, Muslim, Jewish, Christian, Sikh, as well as Buddhist friends, who are sincere followers of their own traditions, what they all have in common is warm-heartedness. Therefore, I am committed to promoting inter-religious harmony.

“We are caught in the cycle of existence because of karma and delusion. If we think over the disadvantages of self-cherishing and self-centredness and cultivate love and compassion for others instead, we can overcome obstacles and make progress on the path.”

His Holiness also made clear his commitment to preserving Tibetan religion and culture, specifically the Nalanda Tradition established by Shantarakshita in the 8th century. What distinguishes it from other traditions is the way it takes a reasoned, logical approach to the study of philosophy and psychology. His Holiness considers it is this approach that has allowed a fruitful dialogue to develop between Tibetan Buddhist scholars and contemplatives, and scientists.

He noted that in the course of translating Buddhist Sanskrit literature into Tibetan, the language was refined to such a degree that it remains the most accurate medium for expressing subtle Buddhist knowledge today. With some satisfaction he mentioned that nuns who have completed the traditional course of rigorous study have recently been awarded the degree of Geshe-ma. They too are playing their part in keeping the Nalanda Tradition alive.

“The essence of Buddhism is cultivating the awakening mind of bodhichitta and an understanding of emptiness,” His Holiness remarked as he turned his attention to the ‘Heart Sutra” and a concise commentary to it by Acharya Jnanamitra. “These have been the focus of my practice until now. When I make the effort I feel I have some semblance of experience and I believe that if I were to develop concentration I might be able to reach the path of preparation in this life.”

Referring to the ‘Heart Sutra’ as belonging to the Perfection of Wisdom teachings that are part of the Sanskrit tradition prompted His Holiness to explain his reluctance to use the terms Hinayana and Mahayana. He prefers to avoid the connotations that one vehicle is inferior and the other superior and refers instead to the language in which they were recorded—Pali and Sanskrit. Not only the Four Noble Truths, but also the instructions for monastic discipline, both fundamental to all Buddhist traditions, were recorded first in Pali.

The second turning of the wheel of dharma, recorded in Sanskrit, consisted of the Perfection of Wisdom teachings whose explicit instruction is the lack of intrinsic existence. For people inclined to fall into nihilism when presented with that idea, during the third turning of the wheel the Buddha taught the three natures: imputed nature that implies no intrinsic existence; dependent nature that is not self-created and perfect nature that has no ultimate, independent existence. At that time he also taught about Buddha nature and wisdom at the time of death. These aspects contributed to Maitreya’s ‘Sublime Continuum’ (Uttaratantra).

Reminding his audience that things don’t exist the way they appear, His Holiness presented a challenge: “Look at me---what you see is my body, listen to me and what you hear is my voice, but where is the Dalai Lama. In the ‘Heart Sutra’ we read ‘form is empty’. Nagarjuna says, ‘There does not exist anything that is not dependently arisen. Therefore there does not exist anything that is not empty.’ The appearance of things does away with the extreme of eternalism; seeing things as empty eliminates nihilism. Form is empty and emptiness is form because form is dependently arisen. Form and its emptiness are of the same nature.

“When you look at things and try to find their nature you find they have no ultimate existence, yet they do exist on a conventional level. In the 60s I was reading one of Je Tsongkhapa’s commentaries. When I came to a line that read, ‘This ‘I’ is merely designated on the aggregates I felt as if I’d been struck by lightning. Later, I understood I’d realized the gross selflessness of a person. As Nagarjuna’s ‘Precious Garland’ says, ‘As long as the aggregates are misconceived, there is a misconception of an 'I'. When this conception of an 'I' exists, there is action which results in birth.’”

In the 'Heart Sutra', when Avalokiteshvara recites the mantra, "Tadyata gaté gaté paragaté parasamgaté bodhi svaha" ("It is thus: Proceed, proceed, proceed beyond, thoroughly proceed beyond, be founded in enlightenment"), he is telling followers to proceed through the five paths. His Holiness clarified what this means:

"Aryadeva's advice to overcome unwholesome deeds, to eliminate views of self and finally to eradicate all wrong views," His Holiness observed, "also refers to making progress on the path. With regard to overcoming unwholesome deeds, the key to achieving a good rebirth and the opportunity to continue to practise, Nagarjuna's 'Precious Garland' lists sixteen causes.

“There are thirteen activities to be stopped. Of the ten unwholesome deeds to be avoided, three are physical - killing, stealing and adultery; four are verbal - false, divisive, harsh, and senseless speech; and three are mental - covetousness, harmful intent, and wrong views. Three additional activities to be restrained include drunkenness, wrong livelihood and doing harm. There are three further activities to be adopted - respectful giving, honouring the honourable, and love.

“Chapter Nine of Shantideva’s ‘Guide to the Bodhisattva’s Way of Life’ opens with the observation—‘All these practices were taught by the Sage for the sake of wisdom’. Therefore, making progress on the path depends on developing an understanding of emptiness supported by the awakening mind of bodhichitta. This will enable you to fulfil your own and others’ goals.”

His Holiness next took up the middle volume of ‘Stages of Meditation’, explaining that it was composed after Kamalashila defeated quietist Chinese monks in debate. They asserted that progress could be made on the path through concentrative meditation alone without recourse to study. Kamalashila, Shantarakshita’s disciple asserted the advantages of combining study with meditation.

Reading through the text, His Holiness touched on training the mind in compassion, which involves developing equanimity, the root of loving-kindness, and identifying the nature of suffering. He discussed at greater length the prerequisites for developing calm-abiding and its pitfalls of dullness and excitement. However, calm-abiding by itself is not sufficient to make progress on the path; much more important is to focus with a calmly abiding mind on what you’ve understood through analysis—that is the way to develop special insight.

His Holiness ended the morning session with the assurance that he will read Je Tsongkhapa’s ‘Praise to the Buddha for Teaching Dependent Arising’ tomorrow when he will also be giving an Avalokiteshvara permission.