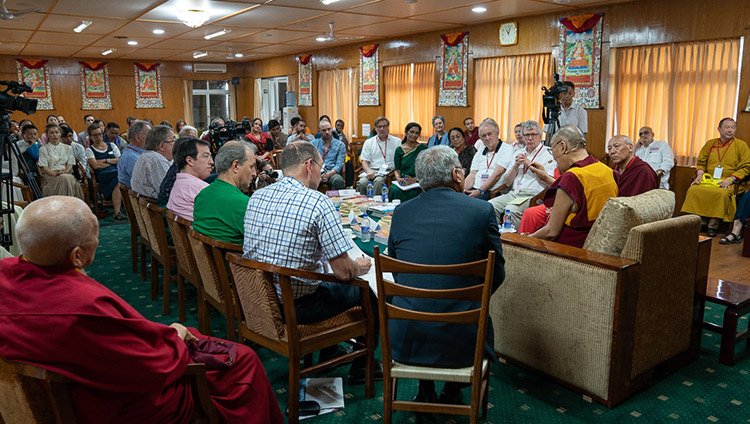 His Holiness the Dalai Lama speaking to educators participating in the conference on Human Education in the Third Millennium duing their meeting at his residence in Dharamsala, HP, India on July 8, 2019. Photo by Tenzin Choejor

Dharamshala, India — “Before they enter the education system, young children’s basic human nature is fresh. Their basic outlook is compassionate," His Holiness the Dalai Lama told a group of educators from different parts of the world, saying “Children survive because of their mother’s kindness and concern, which gives them a lifelong sense of security."

On Monday morning, His Holiness the Dalai Lama met with 15 educators from India, Germany, Brazil, Mexico, Finland, USA, Australia, Bangladesh, Britain, and Russia, who are participating in an initial roundtable conference on the theme, ‘Human Education in the 3rd Millennium’.

After His Holiness had entered the room and asked everyone present to relax, Project Coordinator, Margarita Kozhevnikova explained that the present conference was in preparation for a world forum about education. She outlined four areas of interest: education policy, being human, education for democracy and human oriented education. She introduced Scott Webster who was to moderate the morning session. He summarized what had been discussed so far.

He told His Holiness that as far as educators are concerned, things are getting worse. Schools and universities are increasingly focussing on training students in skills for jobs. Human flourishing is not addressed. If values come up, it’s only in relation to work and being a worker as opposed to being a human being. Education is being reduced to what can be measured. Teachers find they are unable to be creative so the opportunity to provide human education is lost. The policies that govern this are written by governments or by businessmen, not by professional educators.

There is a consensus among educators that there is more to being human than being an economic unit as a worker or consumer. Knowledge and skills have a role, but there is a need for values too. Following their discussions, participants in the meeting say there is a need to take action.

With regard to democracy, it seems to represent human freedom with dignity, justice and inclusiveness. It’s a moral way of living that is coming under attack in the face of rising populism and nationalism, which tend to be exclusionary. Teachers are eager to see democracy restored and strengthened.

In terms of pedagogy and how students develop, participants have noted that questioning can help us become better human beings.

“If education is supposed to have produced individuals living a happy life, in happy communities, in a happy world, it seems to have failed,” His Holiness replied. “We all want to live a happy life and yet every day on the television we can see people facing problems. There are unthinkable conflicts in the name of religion.

“Before they enter the education system young children’s basic human nature is fresh. They don’t care about their playmates’ religious, racial or national background. Their basic outlook is compassionate. “Children survive because of their mother’s kindness and concern, which gives them a lifelong sense of security. Because we are social creatures, individuals survive in dependence on a group. However, once children go to school not much attention is paid to basic human values.

“Modern education evolved in the West with the emergence of the industrial revolution and a greater need for people to understand maths and science. Its goals tend to be materialistic, with little concern for peace of mind. Students are not taught how to tackle their anger, fear or anxiety. In the absence of any other solution, they turn to drugs and alcohol for relief. We teach physical hygiene from an early age. There seems to be a need for a corresponding sense of emotional hygiene. You can make a simple beginning by asking children if they prefer to see smiles or frowns.

“Pursuing self-interest is legitimate, but we need to be wisely rather than foolishly self-interested. To be happy we need a positive attitude and the best way of doing this is to show concern for others—to take care of other members of the community. Education should explain how to develop peace of mind and maintain inner strength.

“In India we have the traditions of ‘ahimsa’ and ‘karuna’ and the practices for cultivating a calmly abiding mind and insight, ‘shamatha’ and ‘vipashyana’—mind is important. Not just on a sensory level but on the level of mental consciousness. Anger and fear arise on a mental level. If we had a map of the mind, a map of the emotions, we’d understand the workings of the mind much better and we’d be able to tackle our negative emotions.

“What destroys our peace of mind is anger, fear and self-centredness. The quantum physics observation that nothing exists as it appears, which corresponds to what Nagarjuna taught, can help loosen the grip of these negative emotions. I’m 84 now and I’ve thought about the wisdom understanding emptiness, compassion and cultivating infinite love for 70 years. I find this very helpful in securing peace of mind. And although instructions about these things are to be found in religious texts they can be regarded as means to better health and studied objectively in an academic way.

“When the education system is focussed on materialistic goals, as modern education too often is, those brought up under it tend to follow a materialistic way of life. In India I am trying to revive interest in the ancient understanding of the workings of the mind and emotions. I hope that in the long run India will be able to combine this ancient knowledge with modern education. If we can train teachers to promote ‘ahimsa’ and ‘karuna’, we can make a significant contribution to a more peaceful world. They can also learn that it’s possible to cultivate love and compassion through the application of intelligence based on scientific findings and common sense.

“This kind of meeting confirms that modern education is not sufficient. And for that reason I hope discussions will continue into the future.”

Responding to questions, His Holiness pointed out that democracy is rooted in having a sense of concern for others and respecting their views, similar to the concern a teacher has for her students. He confirmed that since human beings need to live together like brothers and sisters, the proper way to settle conflicts is to engage in dialogue and avoid violence and the use of force.

Acknowledging how serious global heating and the climate crisis is, His Holiness reported that a Chinese ecologist had suggested to him that after another 80 years the world will be like a desert. He noted that water resources are already diminishing alarmingly. He confirmed that solutions will involve everybody modifying their life-style, abandoning fossil fuels and turning to renewable sources of energy.

“Humanity is one community,” he declared, “and we have to use our intelligence to take care of each other. For democracy to succeed will depend on our motivation and employing our brilliant intelligence with warm-heartedness.”

Bringing the session to a close, Margarita Kozhevnikova mentioned that many educators want to impart human values to their students, but find little room in the curriculum in the system as it is. They are prevailed upon instead to provide measurable results in the form of high test and exam results.

The Ven Samdhong Rinpoché was pleased to share with the gathering that permission has been given for the launch of a six month teacher training course in ancient Indian wisdom in conjunction with Dharamsala College. There will also be 2-3 days training workshops to make them more familiar with secular ethics. It is hoped that 2000 teachers will benefit. Plans are underway to introduce elements of ancient Indian wisdom in schools from KG up to class 8.

Margarita Kozhevnikova thanked His Holiness for taking time to speak to the conference participants. Thanking her in turn for organizing the meeting, he told her that he regards Russia as bridge between East and West. He concluded that to build a better more peaceful world, we need to use our intelligence for peaceful goals rather than for producing ever more sophisticated weapons.