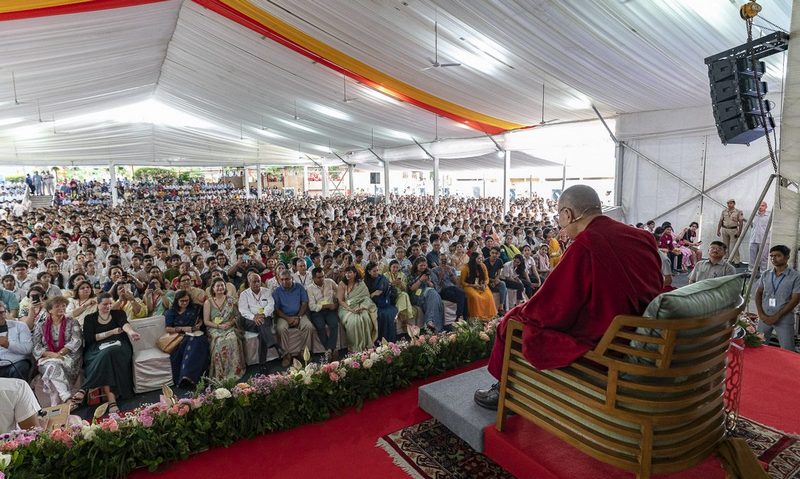 The crowd of more than 2400 students and teachers from 84 schools attending His Holiness the Dalai Lama's talk hosted by SPIC MACAY at Shri Ram School in, New Delhi, India on September 20, 2019. Photo by Tenzin Choejor

New Delhi — "Although we cannot change the past, we can learn from it. Therefore, the future is in your hands. If you make an effort to create a happy society, I believe that within this century you can change the world," His Holiness the Dalai Lama said, interacting with young students who belong to the 21st century, in India's capital New Delhi, on September 20, 2019.

Having flown from Dharamsala to Delhi yesterday, this morning His Holiness the Dalai Lama was received at the Shri Ram School, Vasant Vihar, by the Chairperson, Arun Bharat Ram, the director, and principal. More than 2400 students from 84 New Delhi schools gave him an enthusiastic welcome. Before taking his seat on the stage, His Holiness lit a lamp and thanked the organizers, Spic Macay, for convening the meeting.

The spiritual leader of Tibet started off by saying, “Respected elder brothers and sisters and younger brothers and sisters,” His Holiness began, “it’s a great honour for me to interact with young students who belong to the 21st century. Although we cannot change the past, we can learn from it. Therefore, the future is in your hands. If you make an effort to create a happy society, I believe that within this century you can change the world."

“Scientists tell us that basic human nature is compassionate. Clearly, since we are social animals, we should consider all 7 billion human beings as the community we belong to. Thinking just of ‘my nation’ or ‘my people’ is out of date. During the 20th century, thinking of others in terms of ‘us’ and ‘them’ led to division resulting in fighting and killing," His Holiness said.

“Since all 7 billion human beings are mentally, physically and emotionally the same, you young people today need to cultivate a sense of the oneness of humanity. We need to work together to meet challenges that affect us all, such as the climate crisis. We cannot simply exploit this planet and its natural environment, we have to take care of it. Scientists have been warning us for some time of the dangers we face,” the Nobel Peace Laureate further added.

His Holiness expressed his admiration for the age-old tradition of inter-religious harmony that flourishes in India. He pointed out that members of all the major religious traditions have lived together side by side in harmony for hundreds of years. He stressed the value of India’s example to the rest of the world---religious traditions really can live together in mutual regard. Moreover, India’s secular tradition of showing respect not only for all spiritual traditions but also for those who have no faith is relevant in the context that one billion of the world’s people today are agnostic.

Another aspect of Indian tradition that His Holiness considers relevant today is ‘ahimsa’, non-violent conduct and ‘karuna’, compassionate motivation. He recalled that Mahatma Gandhi employed ‘ahimsa’ to great effect during India’s freedom struggle, which in turn was a source of inspiration to Nelson Mandela in South Africa and Martin Luther King Jr in the USA.

“Modern education, which was introduced in India by the British tends to have materialistic goals,” His Holiness observed. “Material development is important, but we should not neglect ancient Indian knowledge with its thorough understanding of the workings of our mind and emotions. If we could combine that with modern education, we could learn how to tackle our destructive emotions and achieve peace of mind. I have found it very helpful to realize that afflictive emotions are not grounded in reality, whereas compassion can be cultivated on the basis of reason. This has enabled me to face the various complications of my life with peace of mind.”

While answering several questions from the audience, His Holiness pointed out that reincarnation is not a matter of physical continuity, but the continuity of the mind. The substantial cause of a moment of mind is a precious moment of mind. He cited cases of young children he has met, Indians and Tibetans, who have clear memories of their previous lives.

He clarified that karma is about actions and their results. He teasingly explained that if he feels hungry, but eats a biscuit, he’s not hungry anymore. What results in birth as a human being is positive action, motivated by a wish to help others. In contrast to this, he repeated that afflictive emotions arise because of our self-centered attitudes. They are related to a sense of ignorance that mistakes appearance for reality.

Asked who had been his best friend, His Holiness replied that he has had lots of friends. However, the person he was closest to, first of all, was his mother. She was his first teacher of compassion—someone who never showed an angry face. He reiterated that because he always reminds himself of the oneness of all human beings, wherever he goes and whoever he meets he regards as his brother or sister.

Answering a question about reincarnation, His Holiness cited an episode from the end of the first Dalai Lama’s life when his disciples told him he would surely be born in a pure land. He told them he had no such desire but wanted to be born where there was suffering in order to be able to serve others.

His Holiness concluded by reciting his own favorite prayer, from Shantideva’s ‘Guide to the Bodhisattva’s Way of Life’:

For as long as space endures
And for as long as living beings remain,
Until then may I too abide
To dispel the misery of the world.

Finally, a representative of the students thanked His Holiness for coming and for his enriching and inspiring words, which had given them all a fresh perspective. As he left the stage, His Holiness waved to the audience, who beamed and waved in return.