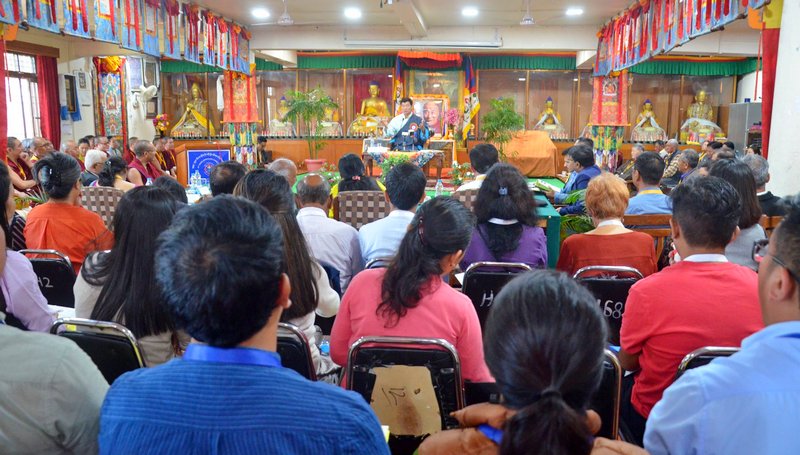 Dharamshala, HP — The Men-Tsee-Khang, known as Tibetan Medical and Astro Institute concluded its three-day meeting of the "10th Body, Mind and Life Conference" on Monday, having focused on Buddhist Philosophy, Tibetan Medicine, Tibetan Astro-science and Modern Science and tackling the both mental and physical health issues of the elderly who have worked tirelessly to provide a meaningful life for their children and common cause.

The 10th Body, Mind and Life Conference on Mental Health Care for the Elderly held at Men-Tsee-Khang, in Dharamshala, India and chaired by President of the Tibetan government in-Exile Dr Lobsang Sangay was the Chief Guest of the ceremonial day. The organiser said that the conference is dedicated to the elder generation, who have worked tirelessly to provide a meaningful life for their children while they may have gone through issues like reduced mobility, health issues, loss of dignity and respect, bereavement and so forth which can cause them isolation, loneliness or psychological distress, etc. Therefore, this conference is a sincere endeavor towards promoting and nurturing the wellness of their mental health.

Esteemed guests including representatives of respected monasteries, Secretary of Department of Health, CTA, Board of Directors of the Tibetan Medical and Astrological Institute and other representatives attended the ceremonial opening. Key speakers consisting of experts of Buddhist Psychology, Tibetan Medicine (Sowa-Rigpa), Tibetan Astro-science, Western Medical Science, Ayurveda, Unani, Sidda, Yoga Therapy, and Homeopathy will speak at the conference.

The three-day conference is being organised by the Department of Body, Mind, and Life from 8-10 October 2019. More than 250 participants from around the world have gathered to discuss and deliberate on the theme of the conference ‘Mental Health Care for the Elderly’. The conference has witnessed the exchange of perspectives from different expertise on the aforementioned theme. The meeting, also attended by Tashi Tsering Phuri, Director of Men-Tsee-Khang and other Doctors and Astro-Science Practitioners.

Dr Sangay further spoke about the success stories of the exiled Tibetans in regard to the preservation and promotion of their culture and tradition globally. He narrated the events of 1959-1960 when Tibetan Institute of Performing Arts and Mentseekhang, as well as many other Tibetan schools and Monastic Institutes, were established under the vision of His Holiness. Today all these institutes are flourishing around the globe. President also credited the success and accomplishments of Tibetans in the last 60 years to the spiritual leader of Tibet.

The President further spoke about the Mental health issue that has significantly increased among young adults and elderly people. He expressed his gratitude to the experts from various medical fields for addressing this important issue today. He demonstrated that Tibetan science of medicine called Sowa Rigpa is one of the oldest traditions of medicine which the Tibetans have well preserved till date.

Deeming the importance of collaboration between Tibetan Medicine and other medical systems, President said, “We have the knowledge and expertise, what we need is infrastructure and resources so that we can sustain the age-old medical tradition more efficiently and further help people around the world”. He then launched a book on Body, Mind, and Life in Tibetan.

After days of discussions and deliberations by eminent speakers and experts, the conference concluded on Thursday, in the presence of chief guest Kalon Ven Karma Gelek Yuthok of the Department of Religion and Culture.

While delivering his speech to the concluding session of the 10th Body, Mind and Life Conference on Mental Health Care for the Elderly, Ven Gelek remarked that the world is dealing with grave problems as consequences of degrading human values and ethics which needed to be recovered and restored through education. This restoration of human values said the Tibetan Minister must be done purely as an academic subject without complexities of religious belief.

“Despite the global progress in terms of science and technology, human values and moral ethics have gone down rapidly,” he remarked. Kalon further noted that the disintegration of human values is catastrophic for the survival of mankind and no amount of material progress alone can sustain a quality life.

Emphasising on the collaboration of modern and traditional medical sciences, Kalon claimed that Men-Tsee-Khang is the precise place, to begin with as it holds Tibet’s ancient knowledge and practice of medicines relevant even today.

While calling for the implementation of health education for the elderly so they won’t have to deal with health-related issues in isolation, fear, and anxiety, he also emphasised that Men-Tsee-Khang should put an effort into standardising medical terms in the Tibetan language without having to borrow English terms.

The Body, Mind and Life department was established in 2013 with the sole aim of practising the vision of His Holiness, which emphasises the significance of Mental Health Care The institute draws its inspiration from His Holiness’ solid stand for the hygiene of mind and emotions.