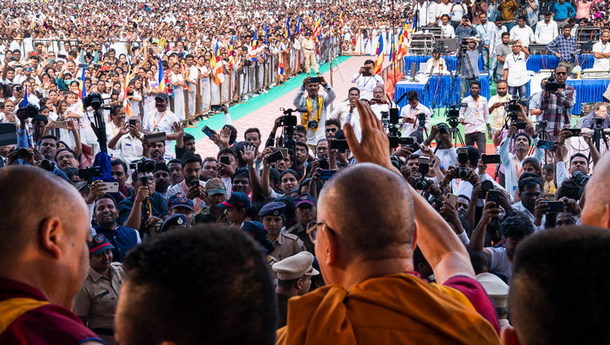 His Holiness waving to the crowd at PES College of Physical Education in Aurangabad, Maharashtra, India on November 24, 2019. Photo by Tenzin Choejor

Aurangabad, India — His Holiness the 14th Dalai Lama of Tibet, urges the more than 50,000 people attending his teachings of Buddhism to understand the meaning of Buddha and his teachings to follow his faith at the stadium of PES College of Physical Education in Aurangabad on 24th November 2019. He also asks the followers to be a 21st century Buddhist with reason and logic, not to follow faith blindly.

During his two-day visit to Delhi, His Holiness the spiritual leader of Tibet participated in Tushita’s 40th anniversary and 12th Dharma celebration and delivered a lecture on ‘overcoming anger and anxiety’ to over thousands of people, including students from over 20 schools in and around Delhi. His Holiness unveils the new daily inspiration book composed of his written work at the event.

His Holiness the Dalai Lama graces Aurangabad at the invitation of the Lokuttara International Bhikkhu Training Centre on 24th November 2019. His Holiness describes himself as a messenger of ‘Indian thought’. India’s long-standing tradition of Ahimsa, Karuna, and non-violence is very much relevant in today’s world therefore his reason for always talking about its importance wherever he goes, he states. He further delivers how his body which was born in Tibet is a Tibetan but his mind which is filled with knowledge rooted in India is more Indian than some of the modern Indians he meets.

His Holiness the 14th Dalai Lama of Tibet addresses to more than 50,000 people gathering in the stadium of PES College of Physical Education in Aurangabad on November 24, 2019. His Holiness shares the stage with Mahayanaka Thero from Sri Lanka, Dr Harshadeep Kamble, the sponsor of the event-launched and Ven. Bodhipalo Mahathero who invites him to address the venerable monks and the lay devotees. The Tibetan religious leader tells the devotees to understand the logic and debate in Buddhism especially Nalanda tradition philosophy which had once flourished in India and kept alive by the Tibetans today.

He remarks how Lord Buddha was trained in India’s existing spiritual traditions and how he adopted the practice of Ahimsa and Karuna eventually advocating a profound philosophical stance. He highlights how Nalanda master like Nagarjuna’s contribution had led to the spread of Buddhism across Asia and the interest shown by the westerners in Buddhism around the 20th century. He also brings Dr Ambedkar whose significant contribution to the understanding of Buddhism with his own formal conversion and conversion of 500,000 others at Nagpur in 1956. It is because of Dr Ambedkar that many of devotees are in the stadium with him, he says.

With Dr Ambedkar that Buddhism is revived in India today.

He further reminds the large audience that with the ever-mushrooming increase in the number of people taking interest in Buddhism it is important to understand the meaning of words Buddha and dharma. He explains that the meaning of Buddha in Tibetan being someone freed of all obstructions to knowledge and cleared away all defilements to mind and able to see the phenomena as they are. By understanding Buddha and meaning of three jewels it entails the comprehension of two truths and four noble truths as well as how one abandons unwholesome action and follows the path to true cessation, he adds.

He introduces the three sufferings, the suffering of suffering which could be avoided by abandoning unwholesome action, the suffering of change which is the things and feelings that people consider pleasurable, end up being suffering and existential suffering which is unsatisfactoriness that pervades all three realms of existences, the desire, form and the formless. He says that suffering is rooted in ignorance that is depicted as the first of twelve links of dependent arising and ignorance is not simply a case of not knowing the reality. But it’s a misconception of reality and once one understands dependent arising then misconception will not arise, he adds.

The spiritual leader then enriches the audiences the concept of selflessness in the four schools of Buddhist thought. He draws the attention of devotees toward the importance of being a 21st century Buddhist to study and to develop faith-based on understanding and reasons. “What would we meditate on, if we don’t understand what Buddha taught?” he asks the listeners.

He proceeds to teach the eight Verses for training the mind. He peaches the devotees with deliberation. He shares the idea of Shantideva’s remark that one’s enemy being the greatest teacher.

“By studying Nagarjuna’s Fundamental Wisdom and Chandrakirti’s ‘Entering the Middle Way’ sheds light on the disparity between appearance and reality,” His Holiness observed. His analyzation of the tradition for more than 70 years and cultivating the awakening mind of Bodhichitta for 50 years have been helpful in countering his misconception of self and self-cherishing attitude, he emphasizes.

At the end of the event, the 84-year-old religious leader of Tibet paid his heartfelt gratitude for everyone who made the occasion possible to meet all people at Aurangabad in Maharashtra.

Tibetan the spiritual leader returns Dharamshala safely after his successful teachings in New Delhi and Aurangabad in the early hours of 25th November 2019. He is heartily received by speaker Pema Jungney and officiating president Karma Gelek Yuthok at the Kangra airport with well-wishers waiting eagerly throughout the road leading to the main temple.