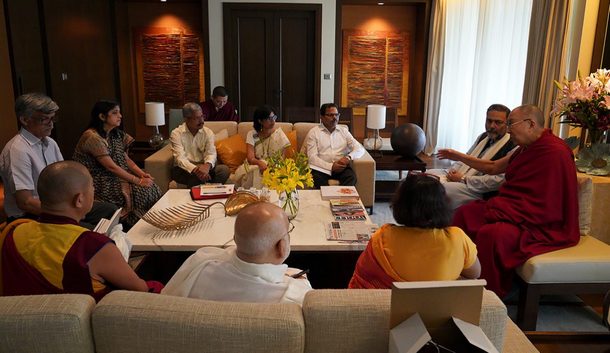 Plateau goa — "Scientists have found that constant hatred eats away at our human system. But our basic nature, since we are social animals, is more compassionate. That’s the basis of our hope,” His Holiness the Dalai Lama said in Maharashtra's Aurangabad on Wednesday. He also assured that the Nalanda teachings also align with findings from modern science.

On December 11, 2019, Goa University inaugurated its Dalai Lama Chair for Nalanda Studies. Many professors, administrators, students, and other eager individuals welcomed His Holiness the Dalai Lama to Goa for meetings and a celebration at the university. During the ceremony, His Holiness addressed the audience on the importance of the Nalanda tradition for modern education and its correspondence with findings from current science.

His Holiness and the Vice-Chancellor of Goa University, Varun Sahni, explained the background of the Nalanda tradition. The Nalanda monastery was a vital school for Buddhist philosophy in northeast India. In the eighth century, the abbot of Nalanda, Shantarakshita, brought these Indian Buddhist teachings into Tibet.

The Nalanda tradition was thus safeguarded and studied for centuries in the Snow Land. Vice-Chancellor Sahnidescribed the significance of Tibet’s keeping this scholarship: “When the university fell in the 12th century, the world would have lost the knowledge it preserved if it had not already been passed to the monasteries of Tibet. Now, it can be transplanted back to universities in India.”

The speakers expressed the importance of these ancient teachings for modern education. Sahni hoped that both the information produced by the Nalanda monastery and its education style could now be replicated in Goa University studies: “The Mahavihara was not only a place where students were taught; it was also a place that encouraged cooperative, competitive argument, stimulating fresh thinking and drawing out innovation. We hope to emulate this in our institute of learning.”

His Holiness the Dalai Lama emphasized that the religious nature of the Nalanda texts and methods does not discount its usefulness for the university system. He remarked that India already carries a precedent of studying the benefit of religious information in secular academic contexts. He also confirmed that knowledge from the Nalanda Mahaviharais “universally applicable” and much-needed for today’s world.

Upon noting the prevalence of war, arms sales, and vicious competition, His Holiness declared the significance of Indian philosophy for addressing these problems. “We seem to be following the pattern of the 20th century, which was an era of war,” he asserted. “This is why India’s tradition of ‘ahimsa,’ non-violence, non-harming, is so pertinent. The world needs ‘ahimsa’ and ‘karuna’—non-violence and compassion—not in terms of prayers or rituals, but as spurs to a different course of action.”

His Holiness assured that the Nalanda teachings also align with findings from modern science. Science sheds light on the contradiction between human compassion and violence, as His Holiness states: “Scientists have found that constant hatred eats away at our human system. But our basic nature, since we are social animals, is more compassionate. That’s the basis of our hope.” Thus, both the social problems which the Nalanda tradition seeks to address and the means to deal with them such as the cultivation of compassion are further enlightened through science.

The Nalanda tradition also supports and compensates scientific research. Drawing from findings in quantum physics, which highlight the position of the observer and question the appearance of reality, His Holiness asserted that the Nalanda school helps understand and calculate individual psychology. For example, he states:  “Destructive emotion is very much based on appearances, like grasping at something absolute. Then attachment and anger come. Once we realize there are differences between appearance and reality, that strong grasping automatically becomes weak.”

He detailed how these ancient psychological teachings may further help address overarching human problems. While negative emotions are based on appearances, proper mindfulness aids in peacefully transforming reality. He states: “Applying our human intelligence, we can discover how to achieve peace of mind. We can recognise that this or that negative emotion, such as anger and hatred, destroys our peace of mind. Cultivating a calmly abiding mind enables us to focus the mind where we will. Developing insight into reality, we can learn to transform the mind.”This “analytical meditation” is central to Nalanda's practice.

Compared to the vast and ancient tradition of Indian psychology within the Nalanda school, His Holiness declared that modern psychology looks like a “kindergarten level.”Still, he upheld that he would rather provide proof from scientific discoveries than Buddhist teaching since science is methodological and universally esteemed.

This experimental approach was also primarily used by ancient Nalanda scholars who valued human intellect and reason in developing knowledge. His Holiness explained, “Buddha himself told us, ‘All my followers—monks, scholars—should not exhort my teaching out of faith or devotion, but rather a thorough investigation and experiment.’ The Nalanda tradition exactly follows that advice.” He further stated that some Nalanda scholars even rejected Buddha’s teaching based upon their own reasoning and experimentation.

His Holiness ultimately described how the Nalanda tradition is important for modern education and society at large. He explained how contemporary science is but an echo of similar findings discovered long ago in the Nalanda monastery. As His Holiness proclaims, “I promote fundamental human values on the basis of scientific findings and common sense. Evidence that it is basic human nature to be compassionate is a source of hope. This is important, not in terms of the next life or liberation, but here and now.”