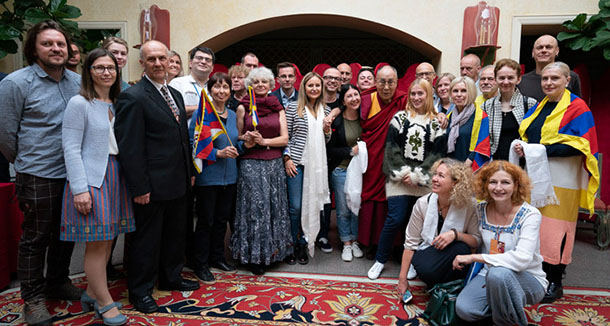 His Holiness the Dalai Lama joining members of the Lithuanian Parliamentary Group for Tibet and Tibet supporters for a group photo in Vilnius, Lithuania on June 14, 2018. Photo: Tenzin Choejor

Vilnius, Lithuania — "The people in Tibet’s spirit remains strong and when you show concern it not only gives them courage, it also sends a clear message to Chinese hardliners. Therefore, I would like to thank you on behalf of the six million Tibetans," the spiritual leader of Tibet told members of the Lithuanian Parliamentary Group for Tibet and Tibet supporters in Vilnius, Lithuania on June 14, 2018.

Meeting with members of the Lithuanian Parliamentary Group for Tibet and Tibet supporters Thursday morning His Holiness the Dalai Lama told them: "We’ve been passing through a difficult period with extensive human rights violations in Tibet, but my main concern is for the preservation of Tibet's unique cultural heritage."

"This is rooted in the ancient Indian understanding of the workings of the mind, on the basis of which we can achieve peace of mind and tackle our destructive emotions. This is something that is very much relevant today," His Holiness the Dalai Lama told them.

“We appreciate the support of friends like you. The people in Tibet’s spirit remains strong and when you show concern it not only gives them courage, it also sends a clear message to Chinese hardliners that the Tibetan issue has to be dealt with in a realistic way. Therefore, I would like to thank you on behalf of the six million Tibetans."

Answering a question about different kinds of maps, the Nobel Peace Laureate remarked "Political boundaries are the creation of bureaucrats, which may or may not reflect cultural boundaries. Historically the Chinese empire was characterized by political power, the Mongolian empire by its military prowess and the Tibetan empire by its spiritual strength. There was a brief period when Mongolia dominated both Tibet and China by military means."

"On the other hand, Tibet’s preoccupation with spiritual affairs meant that its influence extended to what is now, Kyrgyzstan, Afghanistan and Iran in the west, to much of China in the east, to Mongolia in the north and the Himalayan Region and the border with Burma in the south. Therefore, a map reflecting the extent of Tibetan Buddhist culture would be much larger than a political map of Tibet,” His Holiness added.

While posing for photographs with people holding Tibetan flags, His Holiness told them a story. “When I was in Beijing in 1954-55 I met Chairman Mao several times. We developed a close relationship—he was very kind to me, almost like a father to his son. On one occasion he asked if we Tibetans had a national flag. Somewhat hesitantly I answered, “Yes”. He approved and told me we should fly it alongside the Red Flag. So if anyone criticizes you for displaying this flag, you can tell them the Dalai Lama was given permission to do so by Chairman Mao himself. “

Meeting with Prof Vytautas Landsbergis, who became President of Lithuania when it achieved independence following the collapse of the Soviet Union in 1991, His Holiness recalled, "How happy I was when you invited me here in 1991. I was so moved and impressed by the people’s joy, enthusiasm and determination. It was an honour to be here among you."