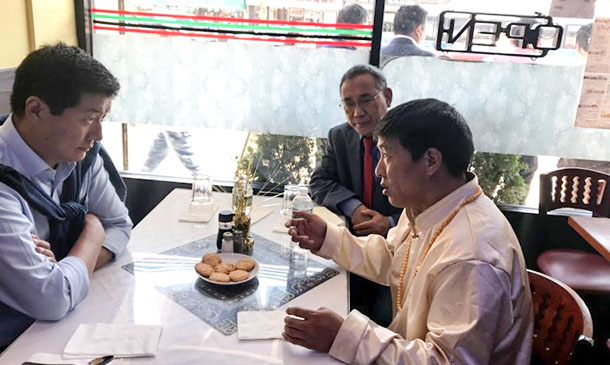 Geneva, Switzerland —The 25-minute documentary titled "“Leaving Fear Behind” has not only presented the real situation in Tibet, but also has become the proof of the plight of the Tibetans in Tibet at a global stage," the President of the Central Tibetan Administration Dr Lobsang Sangay said during his meeting with Tibetan filmmaker and activist Dhondup Wangchen in New York City, on June 17, 2018.

After the completion of his official visit to Canada, the Tibetan President met with the Tibetan filmmaker and activist Wangchen who has been detained by Chinese authorities since March 2008 on charges related to a 25-minute documentary titled “Leaving Fear Behind”. The film is based on 35 hours of footage and 108 interviews that Wangchen conducted over five months.

Dr Sangay expressed his relief over Dhondup Wangchen’s reunion with his family and for being able to live in a free democratic nation. He spoke of how the “Leaving Fear Behind” has been crucial in presenting the real voice and the opinion of the Tibetan people in Tibet to the global community and applauded Dhondup Wangchen for his courage and determination despite all odds.

The meeting was attended by standing committee members of the Tibetan Community of New York and New Jersey, members of Dotoe Chushi Gangdruk, and representatives of Domey and Ustang Cholka along with Representative Ngodup Tsering. Representatives from Tibetan Youth Congress and Tibetan women’s Association were also present in the meeting.

Norbu Tsering, the President of the Tibetan Community of New York and New Jersey, expressed happiness over meeting with Dhondup Wangchen and the presence of the Tibetan President at the gathering with the members and representatives from various non-government organisation, according to Tenzin Lhakmon, Communication Officer, Sikyong’s office.

In a separate meeting Dr Sangay together accompanied by representative Ngodup Tsering and Chinese liaison officer Kunga Tashi met with Dhondup Wangchen where they interacted for almost two hours. They spoke in detail about his journey. Dr Sangay expressing his gratitude, shared that “Leaving Fear Behind” has not only presented the real situation in Tibet, but also has become the proof of the plight of the Tibetans in Tibet at a global stage.

President Dr Sangay also expressed the Kashag’s special attention on Tibetans who have endured suffering due to their sacrifices for Tibet and asked Dhondup wangchen to contact the Office of Tibet whenever he encounters any problems. He further asked the former Tibetan political prisoner to record his experiences in a book for future generations and extended the CTA’s help for the same.