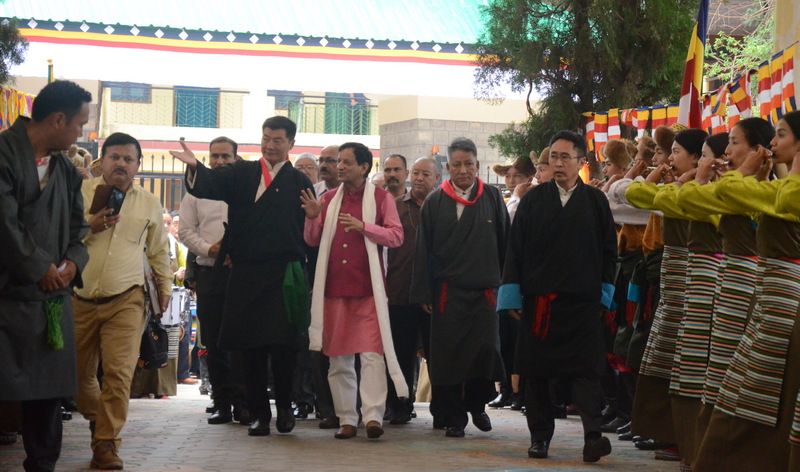 Tibetan President Dr Lobsang Sangay and other top Tibetan officials with Kishan Kapoor, a member of Indian Parliament and former Minister of Himachal State who was the Chief Guest, at the official function held in Dharamshala, India, on July 6, 2019. Photo: TPI/Yangchen Dolma

Dharamshala, India — Member of Indian Parliament and former Minister of Himachal State, Kishan Kapoor has highly praised His Holiness the Dalai Lama for his insight on modern education and his message of peace, articulating a view that is concerned with the welfare of the entire world in the 21st Century.

The 84th Birthday of His Holiness the Dalai Lama was celebrated at the Tsuglagkhang Temple on Saturday, July 6, 2019, with thousands of followers and well-wishers in attendance. An atmosphere of festivity permeated the courtyard of the temple as the attendees prayed for the long and active life of the Tibetan spiritual leader and world peace icon and expressed gratitude for his teachings on embodying values of warmheartedness, compassion, understanding, and forgiveness as pillars of world peace.

The Chief Guest at the event, Kishan Kapoor, Member of Indian Parliament and former Minister of State for Industries and Transport addressed the gathering and offered heartfelt greetings on behalf of the people of Himachal Pradesh in his keynote address. After acknowledging the presence of top Tibetan officials including Dr Lobsang Sangay, Kargyu Dhondup, and Pema Jungney and welcoming the Tibetan scholars from Russia in Himachal Pradesh, all ministers, and parliamentarians of the Tibetan administration, officials of the Himachal Pradesh government, the media persons present and the gathering at large.

Kapoor went on to address, “I submitted my resignation two days ago to the Ministry, I have become a Member of the Indian Parliament from Himachal Pradesh and I’d like to begin by saying that we have gathered here today on a very auspicious occasion. I want to thank the Tibetan government in-Exile, especially the Finance Minister, Karma ji who called me two days ago to invite me to this celebration.

I was heading to the Parliament building, and to be honest, I had quite forgotten that it was His Holiness’s birthday on the coming 6th of July, but I was very generously reminded of this and was humbled and honored to have been invited. Because we the people of Dharamshala consider ourselves very fortunate that a great soul resides here among us from whose life and teachings we have been able to learn so much.

Most of us, in today’s age, think only about our own welfare or our family’s welfare. Some among us are able to progress to thinking about our village and our community’s welfare. However, His Holiness, with his insight on modern education, the environment and his message of peace, harmony, universal brotherhood and love among different communities irrespective of religion, has articulated a view that is concerned with the welfare of the entire world in the 21st Century.

This is why, while he is popularly referred to as the spiritual leader of Tibet, I consider him the spiritual leader of the entire world. Like I said earlier, our thinking is limited, but His Holiness has always been concerned about the image of an ideal world in the 21st Century. One of the biggest concerns of our time, the degradation of the environment, is something that I have known His Holiness to be deeply concerned about. He brings attention to the responsibility that is shared by our generation as a debt owed to future generations, insofar as what kind of world we leave for them.

However, there is one more very important thing that His Holiness is always vocal about- that Nalanda University, the institution responsible for giving the world the message of peace and teachings of Buddhist philosophy on which a model of an ideal future can be based, has been a center of learning whose valuable teachings have been spread throughout the world by scholars from the West, had been destroyed by foreign invaders.

It is with all of your blessings that I have received the opportunity to serve in the temple of the world’s largest democracy with a vote share of 72.4%, and thus I can say this with utmost certainty that it will be my prerogative to try to raise the issues of the Tibetan community and their struggles in the Indian Parliament so that I may do my part in trying to alleviate one of the biggest concern of the great soul whose birthday we are celebrating here today.

Brothers and sisters, this great soul has received about 150 awards from all over the world including the prestigious Nobel Peace Prize in 1989, which is a matter of pride not only for the Tibetan community but all of India, the people of Dharamshala and state of Himachal Pradesh. I would like to once again thank the President of the CTA and the ministers of the exiled government as I say this- Only that society which remembers its past can progress. Elders are the personification of God for us as they like God, guide us through life and I thank Mr President for having accorded our elders with respect.

When the cultural programs were being performed for us here today, Mr President said to me that around the world, wherever the Tibetan community lives, be it any number, we present aspects of our culture and traditions to the people there and make efforts to preserve it in this way. I have found this to be reminiscent of His Holiness’ teaching that we must preserve our culture and how your community is doing the same is a message for the various communities in India.

While the respected President of the CTA has expressed his thanks on behalf of his community to the people of Dharamshala and the Himachal Pradesh government, today I would like to thank His Holiness and the Tibetan people for making Dharamshala what it is today. When His Holiness came to India, Dharamshala did not have the recognition it holds today. It is only because of His Holiness that Dharamshala is renowned world over and now big hoteliers like Hyatt, ITC, Radisson are coming here and many big investors and business- persons have expressed their desire to be a part of the investors’ meet soon to be held in Dharamshala and for that, I am grateful and want to thank the entire Tibetan community today.

When my friend Karama ji, the Finance Minister of the exiled government spoke to me about the protocol involving my reception here, I told him that there was no need to formally receive me as I consider myself one of you, a part of your family, your friend, and your brother. You may not remember this but even when I did not hold a political portfolio in the Indian government, I was invited here to His Holiness’ birthday celebration. What can be greater than this amount of respect that I get from the Tibetan community? Needless to say, I would like to use this stage today as an opportunity to express my thanks for the same.

I was in Delhi today morning and when I left from Himachal Bhawan for the airport, my driver, who is from Dharamshala and was driving in Delhi after a long time, took a wrong turn and got lost for a while. I was worried that I may miss my flight but when I arrived at the airport, I realized that my flight had been delayed. I was worried that I may not be able to take part in the auspicious gathering here today, but I presume it was with blessings of His Holiness himself that I was able to reach here on time and be graced with your presence. I would like to conclude by praying for the long and healthy life of His Holiness The Dalai Lama so that he may continue to shower his blessings on Tibetans and Indians alike. My earnest thanks to all present here. Jai Hind. Jai Himachal.”

Note: The speech was translated from Hindi to English and then edited by Shriyank Mulgund, the Tibet Post International. Should any discrepancies arise, please treat the Hindi version as final and authoritative.