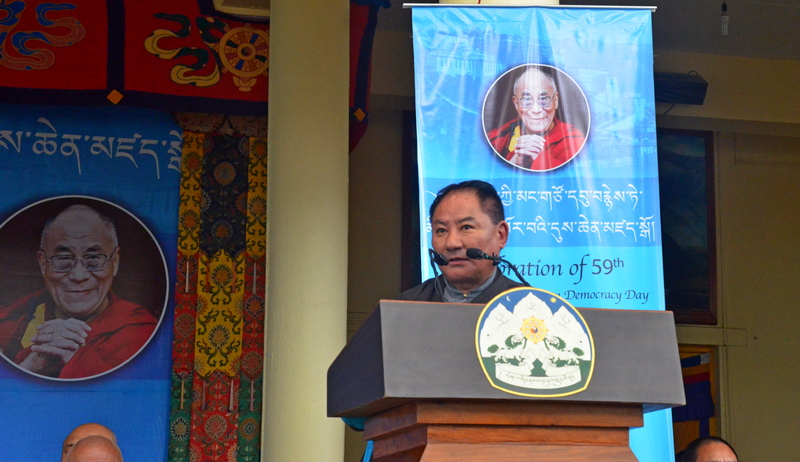 Speaker Pema Jungney delivering statement of the Tibetan Parliament in Exile on the Occasion of the 59th Anniversary of Tibetan Democracy of the Tibetan People in Exile, in Dharamshala, India, on September 2, 2019. Photo: TPI/Yangchen Dolma

Dharamshala, India — 'Uttering the word “democracy” only to pay a lip-service to it while using it as a pretext to engage in parochial strife to thereby create turbulences here and there in society and such kinds of extremities would be most improper. Not only that, it also carries the grave danger of harming the fundamental cause of Tibet,' Speaker of Tibetan Parliament-in-Exile, Pema Jungney said while urging Tibetans around the world to bring a sense of responsibility.

The 59th Democracy Day was celebrated on Monday at the main Tibetan temple complex in McLeodganj town of Dharamshala, India, on September 2, 2019. Presided over by Smt. Sarveen Chaudhary, a cabinet minister of the Himachal Pradesh state government, the event was attended by thousands of people, including Buddhist nuns and monks attended the function at the main temple in Dharamshala along with a host of other senior functionaries and Tibetan supporters.

"On the other hand, uttering the word “democracy” only to pay a lip-service to it while using it as a pretext to engage in parochial strife to thereby create turbulences here and there in society, to commit blasphemy against His Holiness the Dalai Lama, and such kinds of extremities would be most improper. To keep engaging in such kinds of reprehensible conduct will not only fail to benefit anyone but it also carries the grave danger of harming the fundamental cause of Tibet," the statement reads.

The Speaker said that "there is no way such kinds of conduct could be acknowledged as exercises of one’s democratic rights. The Charter of the Tibetan People in Exile enshrines the right of all Tibetan people to exercise their democratic rights and privileges. Likewise, it should also be understood that all of us also have the responsibility to protect the wellbeing and harmony of the society in which we live. All of us, whoever we may be, should not preoccupy ourselves by obsessing on a daily basis with our own personal misfortunes and failings. Rather, we should think things from a broader outlook that is aimed at the general good of the fundamental Tibetan cause and make our efforts from that perspective."

"So far, thanks to the kindness of His Holiness the Dalai Lama, we have been able to flourish under a stable system that has been completed with all the three pillars of democracy over the last 60 years. It has helped us to preserve our Tibetan ethnic identity, religion, culture and so on and achieve revival through progress in them. Likewise, we have been able to establish all kinds of democratic institutions large and small in the form of settlements, schools of all sizes and levels, monasteries and other places of religious worship and study, centres for the preservation of Tibetan culture in India, Nepal, and Bhutan, as well as Offices of Tibet headed by representatives in other foreign countries," the Speaker said while addressing the gathering.

"They are all democratic achievements for which we can justly be proud of. And so long as the issue of Tibet remains unsolved, we should strive to ensure their sustenance while continuing to make further progress and development over these achievements. Along with it, each one of us should, over day and night, bear a sense of responsibility for the Tibetan community in exile and the fundamental Tibetan cause," he continued, saying "If we are able to discipline ourselves to think and act with such an approach, there is no reason why unity will not be achieved within Tibetan society."

Celebrating the 59th anniversary of the Tibetan Democracy, on behalf of the parliament and the Tibetan people, Speaker Jungney said "when the sunshine of happiness of the reunion of the Tibetan people in Tibet and in exile finally dawns in future, resulting in those of us in exile returning to our homeland, the noble democratic system that we have managed to establish here will surely become the best gift we can offer to those who had remained back. Hence, there should be no loosening whatsoever in the silken knots of the ties that bind the Tibetan people together in their pledges of unity."

He is that "this is the basis on which we should be able to keep making continuous progress and we take the opportunity provided by this occasion to make an appeal from the depth of our hearts to everyone to bear this firmly in mind. Along with commemorating today the 59th anniversary of the establishment of Tibetan democracy, we remember with solidarity the plight of our brethren who remained back in their homeland. Ever since we lost our national territory into Chinese hands, our brethren who remained there under the occupation rule had no democratic rights to speak of whatsoever. Far from it, they have remained totally deprived of even the freedoms that are inherent to a human being, such as the freedom of speech, freedom of movement, freedom of religion, and so on which are fundamental in human society."

"Rather, the occupying authorities of the communist Chinese government have kept carrying out a policy of violent repression under which the Tibetan people have endured, as they continue to today, persecution and torture of unmitigated brutality. This is a state of affair which has continued over the last more than 60 years. All Tibetans living in exile remain in solidarity with their brethren living under and enduring the occupation rule with regard to their resolute yearning for freedom," the Tibetan Parliament Speaker added.

Offering prayers for the good health and long life of His Holiness the 14th Dalai Lama, the Tibetan Parliament in-Exile expressed its gratitude to all those who have supported the just cause of Tibet. "Over the last 60 years, a number of countries, especially the trio of India, Nepal, and Bhutan, as well as numerous foreign aid agencies, have extended cooperation, support, and help in the preservation of the ethnic Tibetan identity and in the revival, promotion, and practice of our religion and culture, linguistic heritage and so on. To them as well as to all those who support the Tibetan cause, we take the opportunity provided by this occasion to offer our heartfelt gratitude on behalf of all Tibetans living in Tibet and those in exile."