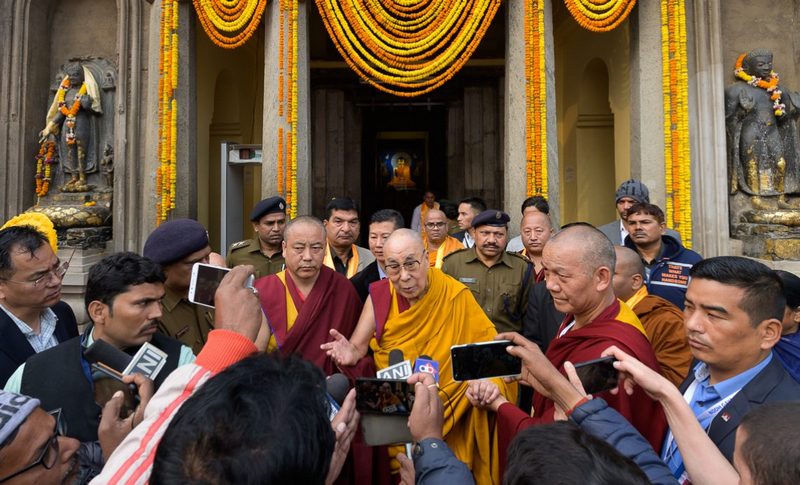 His Holiness speaking to members of the press at the Mahabodhi Stupa in Bodhgaya, Bihar, India on December 25, 2019. Photo by Tenzin Choejor

Bodhgaya, India— We have the power of truth while Communist China has the power of gun says the spiritual leader of Tibet when addressing a group of reporters at the Mahabodhi Temple in Bodhgaya, Bihar on December 25, 2019.

The 84-year old Nobel Peace Laureate strongly responded when a journalist asked what message he had for the Government of China. In the long run, the power of truth will be much stronger than the power of the guns, he added.

Around three years ago, Beijing University carried out a survey on the Buddhist population in China. Their final report mentioned that there are about 300 million Buddhists in China, he imparts. Many of these Buddhists are well educated. These are the official reports and since then the number of Chinese Buddhist followers is increasing gradually, His Holiness implied.

Besides sending a stern message for China, His Holiness harped on the importance of living life peacefully. “Human beings, everyone must resolve to be content and happy, and lead peaceful lives. Peace lies in compassion and warm-heartedness and being a social animal, all human beings have compassion by birth,” he said.

Urging people to make use of their brain and analyse the value of material things surrounding them, His Holiness the Dalai Lama said, "Material things are temporary. For example, someone is a billionaire but maybe mentally unhappy. So happiness is peace of mind. Either we believe this religion or that; we all have the potential of being warm-hearted.”

"Today, one human being is killing the other in the name of religion. But they should all note that every religion carries the same message of love. We should all try to promote religious harmony," he said.

His Holiness the Dalai Lama is greeted by his devotees and well-wishers including thousands of Tibetans, Himalayans and foreign believers who are lined up in the street leading to the holy Stupa with flowers and traditional Tibetan scarves in their hands. He waves to the large audience with a smile on his face.

The religious leader will be teaching in Bodhgaya after his teachings in Gaden Monastery, Mundgod, Karnataka from 12th to 23rd of December 2019. He is scheduled to teach in Bodhgaya from January 2 – 6, 2020.

The Tibetan religious leader will give five days of teaching. He will be teaching Gyalsey Thokme Sangpo's Thirty-Seven Practices of a Bodhisattva (Laklen Sodunma) on January 2. On the next day, His Holiness will confer an Avalokiteshvara Initiation (Chenresig Wang). On January 4, 5 & 6, His Holiness will complete The Wheel of Teachings on Manjushri Empowerments (Jamyang Choekhor) based on its proximal lineage that he began in Bodhgaya in December 2018.