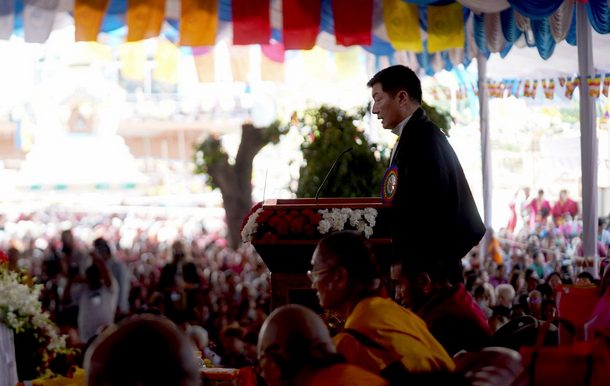 Dharamshala — The Tibetan President Dr Lobsang Sangay has joined other world leaders in congratulating Boris Johnson on his resounding victory in the UK general elections. President also expressed his hope that the UK would continue raising their voices to defend human rights in Tibet.

“During the recent United Nations Human Rights Council, UK led 22 other countries in urging China to end its mass arbitrary detentions and related violations against Muslims in the Xinjiang region,” the Tibetan President said.

President Dr Sangay further added saying: “As one of the founding members of the United Nations, the United Kingdom has played and can continue to play a significant role in the maintenance of international peace and security.”

The legitimate, constitutional, democratically-elected President of the Tibetan people goes on saying, “Under your able premiership, we look forward to the UK’s continued leadership in protecting universal human rights and freedom around the world.”

Recalling the historic meetings of former Britain PMs Gordon Brown and David Cameron and former Deputy PM Nick Clegg and with His Holiness the Dalai Lama, President Dr Sangay said the Tibetan people remain hopeful for this tradition to continue under the leadership of Prime Minister Boris Johnson.

U.S. President Donald Trump also congratulated Boris Johnson, saying the development will mean the UK and US will be free to strike a "massive" new trade deal after Brexit.

EU leaders said they are ready for the next phase of Brexit, just hours after the resounding victory of Prime Minister Boris Johnson's party that all but seals Britain's divorce from the bloc.

"My point is very clear: we are ready. We have decided what are our priorities," said EU President Charles Michel as he arrived in an EU summit where leaders will discuss the aftermath of the UK vote and Britain's planned departure from the bloc on January 31.