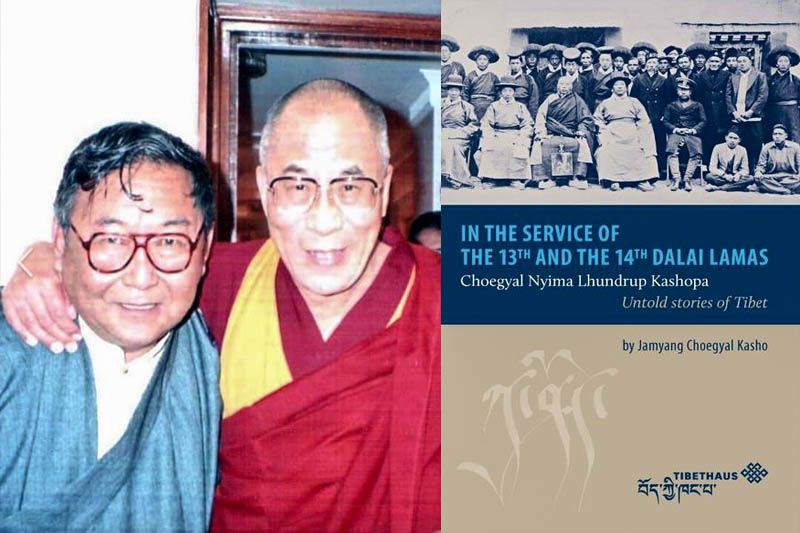 Kashopa Jamyang Choegyal with His Holiness the Dalai Lama and the front cover of his book. Photo: File

Jamyang was born in Lhasa, Tibet, in 1938. Educated in Tibet, India and Beijing, he became completely fluent in the Chinese language and ways of thinking, whilst also attaining mastery of Tibetan and English. After a career as a middle-level official in Tibet, in 1991 he became the first, and probably the only, Tibetan official and Party member of that rank to defect whilst on an official visit abroad. He then worked in London for some 20 years as a translator, advisor and analyst of exceptional ability alongside those studying and publishing comment aries on contemporary Tibetan affairs.

“I offer my sincere condolences to the family of the deceased and ask Tibetans worldwide to remember him in prayers,” the President of the Central Tibetan Administration, Dr Lobsang Sangay said as he presented a brief bio of late Kashopa Jamyang Choegyal.

“Kashopa Jamyang Choegyal was a reputed Tibetan scholar and translator with a great command over Tibetan, Chinese and English. He studied in Darjeeling, India and did further studies in Beijing. Late Kashopa Jamyang Choegyal had served in Tibet as well in exile, bringing tremendous impact to the lives and welfare of the people,” Dr Sangay said, adding: “He will be remembered for his incredible service and contribution to Tibet and the Tibetan cause”.

"We are very saddened by the passing of Jamyang Choegyal Kasho (popularly known as Jamchoe-la within the Tibetan Community in London) in the early hours of 24th March. We remember him in our prayers and send our condolences to his family, friends, and colleagues," said Tsering Passang, Tibet Foundation UK.

Jamchoe-la is the first British Tibetan (living in the UK) known to have been infected with the Coronavirus (COVID-19). According to his close friend, Jane O’Sullivan, Jamchoe-la was admitted to King’s College Hospital in south London on 15th March after initial flu-like symptoms. Two days later, doctors diagnosed COVID-19. Jamchoe-la was already known to have serious underlying medical conditions.

Jane, who has known Jamchoe-la since 1992, said that he was always very grateful for the compassionate medical care he received from the staff at King’s College Hospital. The hospital is one of London's largest and busiest teaching hospitals, with a strong profile of local services.

Jamyang Choegyal Kasho was born in Lhasa, Tibet, in 1938. Educated in Tibet, India, and Beijing, he became completely fluent in the Chinese language and ways of thinking, whilst also attaining mastery of Tibetan and English. In 1991, after a career as a middle-level official in Tibet, he became the first (and probably only) Tibetan official and Party member of that rank to defect while on an official visit abroad. He then spent some 20 years in London as a translator, advisor, and analyst of exceptional ability, working alongside those studying and publishing commentaries on contemporary Tibetan affairs.

Jamchoe-la was a philanthropic person and a generous supporter of voluntary community organisations and charities including Tibet Foundation. Only a few weeks ago, Jamchoe-la donated to our "Give Elders Dignity" appeal – in aid of elderly Tibetan refugees in India and Nepal. He also often sent money to his friends, intended for poor people as well as for commissioning pujas in India.

His book, “In the Service of the 13th and the 14th Dalai Lamas: Choegyal Nyima Lhundrup Kashopa – Untold Stories of Tibet”, was published by Tibet House, Germany, in 2015. Jamchoe-la painstakingly dedicated many years to produce this book, to tell what he described as the “Untold Stories of Tibet” as seen through his own eyes and family experience.

In the Foreword, Prof Robert Barnett, former Director of the Modern Tibetan Studies Program at Columbia University, New York, and co-founder of the Tibet Information Network (TIN) wrote, “Kashopa Choegyal’s book is unique in many ways. It provides a detailed glimpse into the inner world of Tibetan elite politics in the first half of the twentieth century. Focusing on the last decade of the period between the 1910 and 1950 invasions of Lhasa by armies from China, it details the life and thinking of his father, a leading government official at that time."

"Several works about that epoch have appeared in English in recent years, written by other leading aristocrat-officials or their offspring, including at least five by the Dalai Lama or his immediate family. But those writers and their subjects had fled with the Dalai Lama in 1959 and had little knowledge of events in Tibet following their departure, as well as limited familiarity with Chinese language or politics. This book is thus the first of its kind, and the first to be written in English without a ghostwriter or intermediary by a Tibetan brought up and educated in the Chinese system,” Prof Barnett added.

Prominent Tibetan historian and Canada Research Chair in Religion and Society in Asia at the University of British Columbia, Prof Tsering Shakya also wrote, “Jamyang Choegyal has written a compelling case for his yab dampa pa, noble father’s place in the recent history of Tibet. As he writes, he is not writing what might be called an objective history, but the truth as he and his family see it. Yet it is a frank and detailed account of an important Tibetan historical period and as such it provides a window into the political life of Tibet. The publication of the book adds to our understanding and knowledge of Tibet."

“By writing this book, Jamyang Choegyal has served faithfully his noble father’s memory, but also provided a source of information on the recent history of Tibet for future generations of Tibetans, for whom the recollection of a once free and independent Tibet will surely provide inspiration,” he added.

"In 2015 he published this book about his father, a minister of Tibet in the 1940s. Choegyal had both British, Tibetan and Chinese education. During a visit to London in 1991, he became the most high-ranking Tibetan member of the Chinese Communist Party who has jumped off abroad. He then worked for Tibet Information Network as an analyst, advisor and translator," Anders Højmark Andersen, chairman of the Tibet Support Committee, Copenhagen, Denmark.

"It's been a while since we met, but the last time we spoke, he was excited about his new book. He asked what I thought of it, and I said, this needs to be told and shared. It's a piece of our history," said Pema Yoko, executive director of advocacy group Students for a Free Tibet.

Jamchoe is survived by his daughter and a grandson in Tibet.