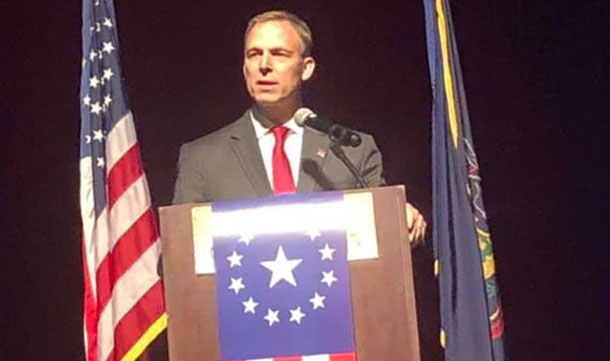 US House Representative Scott Perry introduced a bill (H.R. 6948) that would authorise the U.S. President to recognise the Tibet Autonomous Region of the People’s Republic of China "as a separate, independent country, and for other purposes”.

The bill was introduced and referred to the House Committee on Foreign Affairs on Tuesday, 19 May, 2020.

From the Congressional Record, Volume 166 (2020): A bill to authorize the President to recognize the Tibet Autonomous Region of the People’s Republic of China as a separate, independent country, and for other purposes; to the Committee on Foreign Affairs.

H.R. 6948 — A bill to authorize the President to recognize the Tibet Autonomous Region of the People’s Republic of China as a separate, independent country, and for other purposes; to the Committee on Foreign Affairs.

Tibetans and supporters shared expression of the appreciations using their social media platforms. Tenzin Tsundue, an India based poet, writer, and Tibetan activist shared his thoughts on his Facebook and welcomed the move, saying "Good News: US Representative Scott Perry has introduced a bill to recognize Tibet Autonomous Region as a separate, independent country."

Tsundue continued to say, "'the specification should have been the historical independent Tibet not TAR. TAR is China demarcated area and it's only one-third of Tibet. Also, the CIA supported Tibet that was fighting for independent Tibet, not TAR. I am sure when the bill is debated in the house and finally adopted it could be shaped to include the entire Tibet."

Tenzin Dorjee (Tendor), another Tibetan writer and activist, based in New York, wrote: "In what is sure to be a historic initiative, US Congressman Scott Perry (of Pennsylvania) has introduced a bill to authorize the president to recognize the 'Tibet Autonomous Region' as an independent country."

"I encourage Tibetans and supporters to write to Rep. Perry's office to thank and praise him for this unprecedented initiative. We should also make sure to request him to change 'TAR' to 'Tibet,' so that Kham and Amdo are included in the congressional vision of an independent Tibet. Concerns about feasibility or achievability need not bother us at this time, as the bill is clearly a tool to change discourse and disrupt politics as usual," he further said.

Tendor added, "given the current polarization of American politics, I know that moral purists will ask about the sponsor's intentions or the authenticity of his support, but we should remember that in politics, it's not intentions but actions and opportunities that really count. Language, words, speech are the only way to establish intention in politics. We should welcome this landmark if somewhat unexpected initiative and seize the opportunity to put Tibet on the highest agenda of the state."

His response to China's controversial security law aimed at silencing Hong Kong's protests, Perry wrote on his social media platform saying, "this week, Hong Kong experienced the greatest attack on its freedoms and autonomy since 1997, with the CCP's proposed "national security" law. The United States will always stand for democracy and freedom and support the people of Hong Kong against the oppressive CCP regime."

Congressman Perry was among the 32 members of Congress who signed the Tom Lantos Human Rights Commission’s bipartisan letter to the US Secretary of State in May 2019 urging the Trump Administration to promptly implement key legislations—Tibet Policy Act of 2002 and the 2018 Reciprocal Access to Tibet Act—passed by Congress to guide United States policy on Tibet.