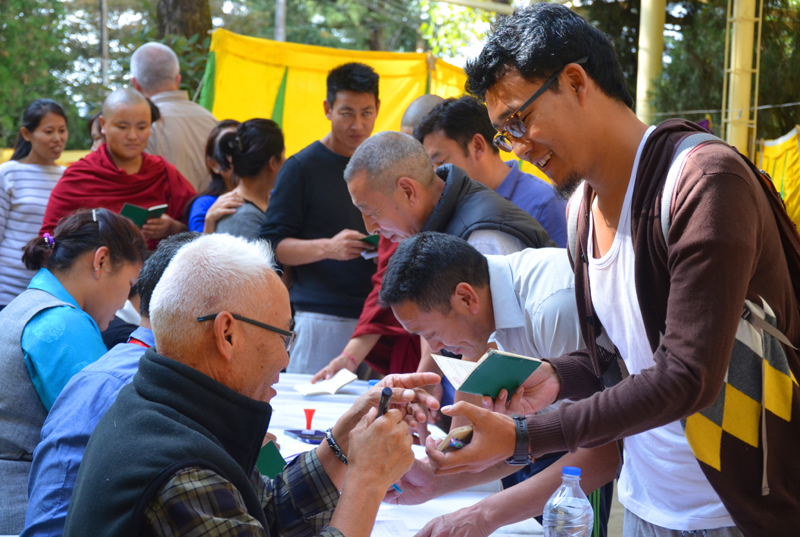 Dharamshala — Thousands of Tibetans worldwide voted Sunday (October 18) for Sikyong of the 15th Kashag (Cabinet) and members of the 16th Tibetan Parliament in Exile. General elections are held at least every five years.

More than 80,000 Tibetan in about a dozen countries from Australia to the United States had registered to vote in Sunday's preliminary elections which will decide which parliamentary and prime ministerial candidates will run in the final polls on March 20, 2016.

Monks, nuns and families stood in long queues waiting to vote at various locations, including the main temple in the northern Indian hill station of Dharamshala, where residence of His Holiness the Dalai Lama is situated.

The pool area opened at 9.0 am and long lines that stretched down the road to cast their votes at a polling station in Gangchen Kyishong where the Central Tibetan Administration is based.

According to local sources, similar voter turnouts were reported from all the Tibetan settlements and Tibetan communities across India and the world.

A four-member delegation representing the Asia Democracy Network (ADN) and the Asian Network for Free Elections (ANFREL) which arrived late last week visited all major polling stations in Dharamshala for the first time to witness the voting procedure for the exile election.

The 2016 general election is the second direct election of the Tibetan leadership since the complete devolution of political authority by His Holiness the Dalai Lama in 2011.

The results from Sunday's voting are expected in December. The final round of voting is scheduled to take place on 20 March 2016.