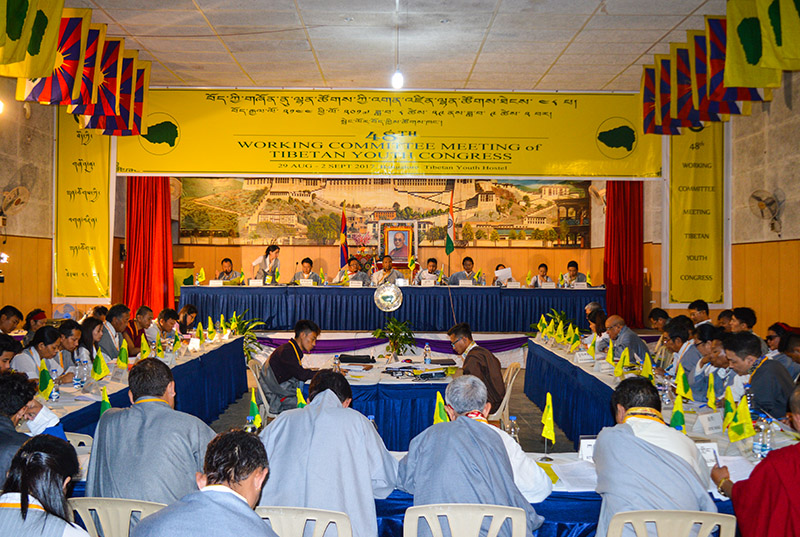 Bengaluru, India —The five-day meeting of the 48th Working Committee Meeting of Tibetan Youth Congress began on Tuesday in Koramangala, Bengaluru, the capital of India's southern Karnataka state, to discuss strategies about various political campaigns to be conducted for Tibet's Independence movement. They also discussed issues related to the security and Safety of India during the first day.

The opening ceremony was held this morning at Tibetan Youth Hostel in Bangalore. The Chief Guest for the function was Prof. (Dr.) R. Venkata Rao, Vice-Chancellor of National Law School of India, Bangalore University and the special guests were Tejasvi Surya, Advocate and General Secretary, BJP Youth Wing Karnataka and Veteran Lieutenant Gen. PG Kamath. Other dignitaries from the Tibetan community, representatives of Tibetan NGOs and former executive members of RTYC Bangalore also attended the same.

As a token of gratitude towards the centre and state government, several volunteers from Tibetan Youth Congress, Baengaluru chapter have been contributing to Modi's Swachh Bharat Mission by conducting cleanliness drives in several parts of the city.

TYC President Tenzing Jigme in his address spoke about the organization's aims and goals for the future and urged all members to make sacrifices and take responsibility for the movement. "The present political situation between China and Tibet is pretty critical and India has always been a great support for the Tibetan government in exile. Keeping in mind the situation of Tibet, this annual meeting will look towards preserving our culture, religion and language with India's help."

"We will also look into instances of self-immolation as since 2009, we have lost over 150 fellow Tibetans who have burnt and killed themselves as an act of sacrifice for freedom of Tibet. We recently had another self-immolation in Himachal Pradesh which we need to stop through our strategies and campaigns," he added.

Special Guest, Tejasvi Surya spoke of the importance of the movement of the Tibetan people. He said the struggle of the Tibetan people and Hindus are similar and Tibetans should fight for their basic human right i.e. freedom. He also said that the main enemy in the freedom struggle is not the enemy country but complacency. He stressed that Tibetans should never be complacent and should carry on with their freedom struggle determinedly.

Gen PG Kamath spoke about the minerals and richness of Tibet and why China has occupied Tibet. He said that many rivers in South Asia originate from Tibet and if anything happens to these rivers then about 1.4 billion people get affected because they depend on Tibet's water for survival. He also said that Tibet issue is also India's issue because after China occupied Tibet, India has been sharing its borders with China and every year India spends huge amount of money for its defense.

Addressing the gathering, the Chief Guest spoke about His Holiness the 14th Dalai Lama's visit to National Law School of India last year. He said his holiness spoke about the importance of preservation of the rich Tibetan Buddhist culture during his visit. He also said that we should have passion for what we do and compassion for who we do. He ended his speech by quoting His Holiness the 14th Dalai Lama, "Choose the power of love over the love of power."

The opening ceremony concluded around 12 p.m. with the Vote of Thanks given by Vice-President, Tamding Hrichoe. The meeting will end with a peace march on September 3 from Freedom Park to Town Hall where several issues about Tibet would be raised and the committee would ask for support from Indian government.

TYC, the largest Tibetan NGO in exile started in 1970 and working across the globe for a common struggle for the restoration of complete independence for the whole of Tibet, which includes the tradition three provinces of U-Tsang, Do-toe, and Do-med. The TYC has 35,000 members on its rolls.