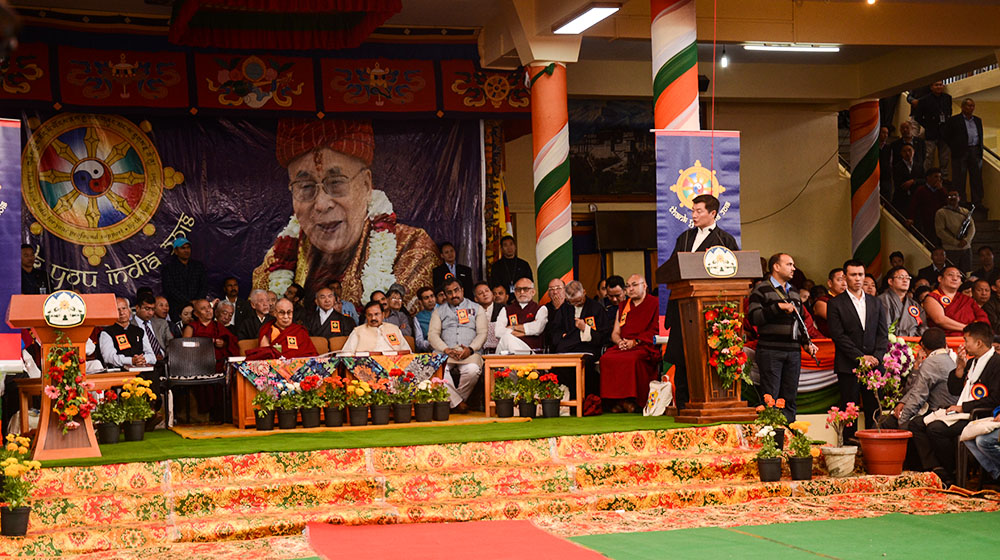 Dharamshala, India — President Dr Lobsang Sangay strongly urged his compatriots to strengthen efforts to make the return of His Holiness the Dalai Lama to his native land a reality.

Dr Sangay, President of the Central Tibetan Administration also said Tibet has seen 60 years of destruction of its civilization, culture and identity by the communist Chinese since the Tibetans' spiritual leader, fled to India in 1959.

His Holiness the Dalai Lama and President Dr Sangay spoke at a public event in the northern Indian town of Dharamshala marking the beginning of the 60th year of the spiritual leader's exile in India. Dr Sangay said His Holiness the Dalai Lama "dreamt of himself in a room in the Potala Palace filled with light where he will be reunited with Tibetans inside Tibet." The Potala Palace in Lhasa was the residence of the Dalai Lama until he fled to India during the 1959 Tibetan uprising.

"We Tibetan people with the support of people of India and abroad should strengthen our efforts to make his return to his Potala Palace a reality," Sangay said. "Let us reunite the Dalai Lama with Tibetans inside Tibet who have spent the last 60 years with a hope, with a dream to get a glimpse of the Dalai Lama in their lifetime."

"Thousands and thousands of Tibetans have been killed and have died for the cause of Tibet. Many of them have burned themselves alive," he said in a hard-hitting speech.

The Dalai Lama thanked India for giving shelter to him and said the Tibetans have turned their unfortunate circumstances into a path of enlightenment by reviving their spirit and influence wherever they are.

Ram Madhav, a governing Bharatiya Janata Party leader, expressed hope in his speech that the Dalai Lama "would be able to find a solution to the Tibetan issue through peaceful and democratic means that will facilitate your honorable return to your homeland."

The Dalai Lama was subdued in his speech, but in the past he has said the issue of Tibet could be best resolved amicably through the middle way approach, by resuming dialogue with China demanding true autonomy while remaining under Chinese rule.

The Dalai Lama said Saturday that he left Tibet in 1959 under difficult circumstances without knowing what would happen in the next 50 or 60 years. "Today we are celebrating 60 years in exile where we could see what will happen to us in the future to a certain extent," he said without elaborating.

China says Tibet has historically been part of its territory since the mid-13th century, and has governed it since 1951. But many Tibetans say the region was effectively independent for most of its history, saying Communist China began running Tibet after the military invasion of Tibet in 1949, assuring that freedom of Tibetan people would be respected.

But Tibetans also say the dictatorship government led by Mao— known as one of the most deadly mass killings of human history, went back on his word, forcing His Holiness the Dalai Lama to flee Tibet in 1959, destroying more than 6000 monasteries and temples and killing over 1.2 million Tibetans, out of a total of 6 million. Since then, Tibetans have launched an international campaign against the "occupying" China's authoritarian state that continues to face criticism for human rights violations in suppressing the people of Tibet.