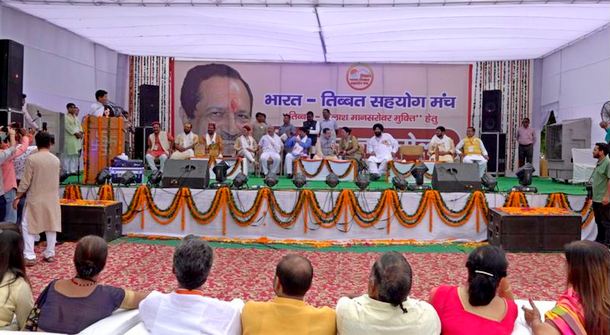 New Delhi — 'Sardar Vallabh Bhai Patel was right about Tibet. It is a reality now. India is facing the danger and threat of China due to the occupation of Tibet. There are tensions on borders. If Tibet has been free, there was no need for such expenses. Instead, all could be used for the development,' President Dr Losang Sangay told a gathering of Tibet supporters and activists from all over India in large numbers as they joined him recently for the National Convention on Tibet organised by the Bharat Tibbat Sahyog Manch.

At the outset, the program began with the lighting of lamps before the statue of Lord Buddha, portraits of Bharat Maata and His Holiness the Dalai Lama by President Dr Sangay accompanied by Shri Indresh Kumar and other guests. Some classical dances depicting the culture of India were presented before the guests and the audience.

Dr Sangay in his address foremost paid his namaskar and greetings to the large crowd gathered and congratulated Bharat Tibbat Sahyog Manch on the completion of 20 years. He offered his heartful thanks to all BTSM activists gathered from all over India for the service rendered to the Tibetan movement.

Dr Sangay mentioned that 60 years ago, Sardar Vallabh Bhai Patel wrote a letter to Pandit Nehru telling about the danger of Chinese occupation of Tibet and its consequences. “It is a reality now. India is facing the danger and threat of China due to the occupation of Tibet. There are tensions on borders. Lots of money are spent on border security. If Tibet has been free, there was no need for such expenses. Instead, all this money could be used for the development of the country.”

"Today, you all are here talking about freedom for Tibet because there is no freedom in Tibet. Millions of Tibetans had been killed, thousands of monasteries had been destroyed and this is still going on. Larung Gar and Yachen Gar, where thousands of monks and nuns study, is being demolished. According to the Freedom House Report, the least free nation after Syria is Tibet. Therefore we need the world’s support and your support, that is India.”

He further said, “Nowadays India talks about Made in India. But I will tell you the original Made in India is the Tibetan movement. Buddhism came to Tibet from India. Tibetan democracy is adopted from Indian democracy. We have drunk India’s water. We have been taught by Indian teachers."

"In fact, His Holiness the Dalai Lama calls himself ‘a son of India’. So the original Made in India are us. If Made in India has to be a success, Tibet has to succeed," the President said, adding: "I believe under the leadership of Shri Indresh Kumar, Bharat Tibbat Sahyog Manch and other Tibet Support Groups in India, Tibet will be free.”

He mentioned that His Holiness the Dalai Lama himself has said that the decision about his reincarnation solely lies on him. His reincarnation will not be born in China. There is a possibility that the next Dalai Lama may be born in India or any Asian countries where there are no shades of China’s presence, he added.

Indresh Kumar who is also the founder of the BTSM concluded by saying that 'the goondagardi and dictatorship of China will not last. Tibet will be free and His Holiness the Dalai Lama will return to Tibet at Potala Palace'.

The National Convention was attended by Bharat Tibbat Sahyog Manch activists from all over India in large numbers. India Tibet Coordination Office, Delhi Coordinator Jigmey Tsultrim with staff, Tibetan representatives from Samyelling Tibetan Settlement, Majnukatilla and a large number of Tibetans from and around Delhi also attended the program.