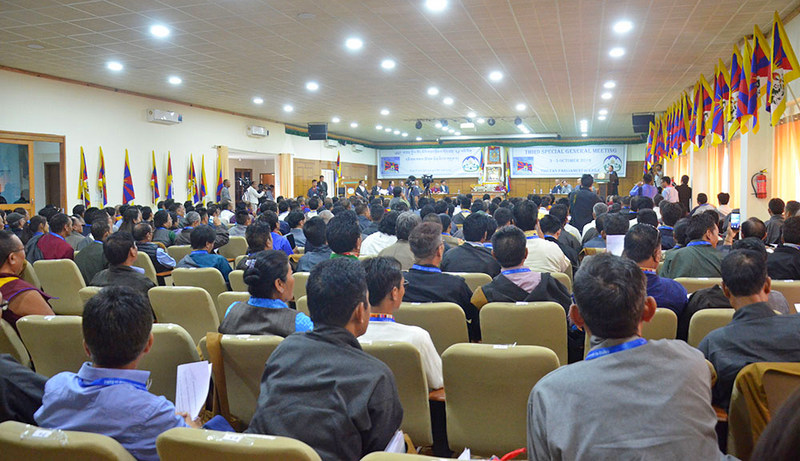 Dharamshala, India — A Special General Meeting (SGM) of the Tibetan people has recently unanimously passed five historic resolutions, aimed at the future policy on freedom struggle for Tibet and the remaining four relating to the reincarnation of His Holiness the Dalai Lama. The measure, while seemingly obvious, is a monumental blow to the communist-authoritarian regime of China.

As many as 340 leaders and representatives of the five major schools of Tibetan Buddhism, top officials of the three main organs of government are the legislative, executive, and judiciary, and the Tibetan diaspora spread across 24 countries, adopted four resolutions unanimously.declaring "the six million Tibetan’s earnest prayers for the 14th Dalai Lama to reincarnate as per the Tibetan Buddhist tradition.

The declaration marks a significant moment in the global effort to end religious persecution, consistent violations of human rights and rejecting outrightly China’s preposterous interference in the sacred institution of Tibetan reincarnation."

Following is the full text of the Resolutions of the 3rd Special General Meeting of Tibetans, held under the provisions of Article 59 of the Charter of Tibetans in Exile from 3 to 5 October 2019 adopted at the T-Building Conference Hall, Gangchen Kyishong, Dharamshala, India, on Saturday, October 5, 2019.

The Bodhisattva Chenrezig, the crown ornament of the material world and the spiritual realm, the embodiment of the compassion of all the Buddhas, had, for many countless eons attained the trio of accomplishment, maturation, and perfection of accumulation of merit and wisdom and in that milieu tackled the twin obscuration’s of delusive obscuration to liberation and obstructions to omniscience to get rid of even a predisposing latency of it as he carried out an endless stream of Bodhisattva deeds of such immense magnitude as to encompass the entire universe. He had thereby already attained complete Buddhahood to enter the stage of nirvana.

Nevertheless, in keeping with the disposition, inclination, and temperament of the sentient beings, he performed miracles deeds by unimaginable means to carry out such roles as were appropriate to tame their obscured minds. With regard to his carrying out of such role-play miracles to tame sentient beings to such extent, it is thus stated of him: “The universe is as vast as the unfathomable expanse of the space / And your miracle emanations have numbered as many as the countless number of sentient beings that inhabit it. Even though having made miracle manifestations of such enormous number, not even the tip of a tiny hair on your body even so much as twitched, For it was with effortless spontaneity, like that of the condensed clouds giving way to rainfall, that you accomplished your deeds.”

As thus stated and the like, the totality of the deeds of the Bodhisattva Chenrezig in his various countless miracle manifestations in the past are immense beyond imagination. However, with regard to such of his inestimable range of deeds as had been carried out within the conception of those to be tamed in the general context of the holy land of India ever since the thirty-six alphabet-based system of writing came into being there, and in the particular case of the Snowland of Tibet, which did not constitute an object for taming by other Buddhas and their spiritual heirs, and over which he assumed responsibility as its patron deity, the story is told thus: Long in the distant past, when the Buddha resided in a bamboo grove, a light of great luminosity filled Tibet which brought a smile on his face. The bodhisattva Sarvanivarana Viskambin asked the Buddha for an explanation of the causes and conditions underlying his act of smiling.

And the Buddha replied that the wild and outlying peripheral snow-land of Tibet which had failed to be covered by any of the Buddhas of the three-time realms for spiritual salvage has, thanks to the benevolence and great kindness of the Bodhisattva Chenrezig, turned into a place where the Buddhist religion will flourish all across with the luminosity like that of a rising sun. And there was a special reason why where all other Buddhas had failed, only Chenrezig succeeded in taming the beings of the wild and outlying peripheral snowland of Tibet. This goes further back in time when in the presence of a gathering of a thousand Buddhas, the Bodhisattva Chenrezig took a vow. He prayed to vouch an undertaking that concerning the entirety of the sentient beings of that wild and outlying peripheral land who present the greatest of challenge for taming, may he succeed in guiding them towards the path to spiritual salvation. Such was the kind of pledge he took, as it has thus been stated.

Besides, the Kadham Legbham texts collection thus states: As it was said, “The Dakinis have said in their Vajra songs, that, In the northward direction of the sacred Bodh Gaya, There is a ghost land called Tibet, With pillars of mountains so high as to hold up the sky, With lowland lakes of turquoise mandalas, With Snow mountains of crystal temples, With grasslands of yellowness resembling heaps of gold, And with the aroma of herbal incense wafting the land.” Likewise, the texts also say: “O! Lord of the Snow Mountains Chenrezig, In that sacred realm lies your abode, And in that abode are your disciple-subjects.” Thus, as prophesied in numerous sutra and tantra texts, the Bodhisattva Chenrezig first originated and spread out the human race, then nurtured his offspring with worldly material things in the next stage, and finally brought them to spiritual maturation in the last stage.

The lineage began with the ancestry of a Bodhisattva monkey mother. Then in the later stage, he came as the first king of Tibet Nyatri Tsenpo. From him, and through successive rulers, including as the trio of the great Buddhist kings Songtsen Gampo, Trisong Detsen and Tri Ralpachen, he also came as Bodhisattva translators and scholars who illuminated the land of Tibet that was otherwise darkened by the obscuration of ignorance with the moonlight of Buddhist religion. The subjects of Tibet were thereby drawn to both immediate and long-term zeniths of welfare, prosperity, and bliss.

Then the Bodhisattva Chenrezig made an appearance as the principal disciple of Je Tsongkhapa, the omniscient His Holiness the First Dalai Lama Gedhun Drubpa Pal-Zangpo. Regarding him, the Kadham Legbham texts collection thus states: “The Bodhisattva Chenrezig then emanated as Pal Zangpo incarnate.” As thus stated, Gedhun Drubpa Pal-Zangpo made the appearance of being a perseverant observer of the vows of an ordained maroon-robed monk in carrying out his noble deeds. And up to the fourth reincarnate lineage, the Bodhisattva Chenrezig immersed himself mainly in being the principal upholder of the Yellow-hat Gelug tradition of Tibetan Buddhism as well as of the other traditions of Tibetan Buddhism by means of his pure vision perceptions. On that basis, he illuminated the entire lands of Tibet and Mongolia with the light of the Buddhist religious teachings.

As regards the timeliness of the appearance of His Holiness, the protector refuge of incomparable kindness, it is thus stated in the Manjushri Root Tantra text: “When the teachings of the Buddha on the earth, reaches the end of its time and declines, Then, Like the kingly observer of precepts, Shall (he) indubitably appear.” When the whole body of Tibet – its subjects, nationhood, religion, and governance – stood sapped of all its strength and vitality, abandoned in utter helplessness as if by a doctor of an incurable patient, His Holiness the Great Fifth Dalai Lama appeared and established the Ganden (the hundred-fold happiness-characterized) Phodrang under the comforting shade of the white parasol of whose government system the wellbeing of the Tibetan subjects were ensured.

Since then, until the period of the incomparable His Holiness the Great Thirteenth Dalai Lama, the gratitude for the kindness and care received by the Tibetan nation and people has been immeasurable. In particular, the successive previous Dalai Lamas, all great treasuries of compassion, firmly adhered to their oaths of kindness and continued to care for the Snowland of Tibet as regards both its geographical territory and its natural and human constituents, as well as for the governance of the nation by deliberately assuming earthly manifestations. In that state, each ascended the throne as His Holiness the Dalai Lama without any sort of controversy. They took charge of their state responsibilities as prayed for in both the spiritual and temporal aspects at times when the governance of the nation had dissipated like a butter lamp that had stopped burning because of the complete exhaustion of its fuel of oil.

Regarding the process for the discovery and recognition of the reincarnation of His Holiness the Dalai Lama, there is a well-established, unique historical tradition for the recognition of reincarnations in Tibetan Buddhism which dates back from the very early part of the 13th century and it is fully preserved to this day.

The relationship between successive Dalai Lamas and the Tibetan people has been akin to that between head and neck, or, as it were, between the body and its shadow, and therefore never ever separable. Hence it is only to be expected that the tradition of the continuance of the lineage of the Dalai Lamas through successive reincarnations should remain for the sake of the people of the Snowland of Tibet. Therefore through this Special General Meeting, the 340 delegates who have come from 24 counties as representatives of the general Tibetan public sees it as imperative to adopt a resolution that thus follows hereunder.

1) That this Special General Meeting prays with unchangeable resolve that His Holiness the Great Fourteen Dalai Lama, the unsurpassable leader who is like the eyes on the foreheads and the heart in the bosoms of all the tsampa-eating subjects of the Tibetan nation may continue on as their ultimate protector-refuge of utmost recourse both for this and their future lives for a hundred eons.

2) That on behalf of all the Tibetan people presently living in Tibet and in exile, this Special General Meeting prays with a single-minded devotion, and in a single voice, that for as long as sentient beings remain extant on the Snowland of Tibet, the lineage of successive reincarnations of His Holiness the Dalai Lama may continue with imperativeness for the sake of the dharma and the sentient beings of this land.

3) That this Special General Meeting is of the position that with regard to the process for the discovery and recognition of the reincarnation of His Holiness the Dalai Lama, the entire task and power lies in His Holiness Himself and the duly empowered responsible officials of the Gaden Phodrang Trust of the Dalai Lama and in no way in any other entity, be it any nation, any government, any organization of whatever description, or any private individual.

That with regard to the first item on the agenda of this Special General Meeting, which is on the Five Fifty Vision of the Central Tibetan Administration.

Such of the opinions and suggestions endorsed by the different committees of this Special General Meeting as well as such of those opinions and suggestions submitted by the wider general Tibetan public as are available in writing will be examined and on that basis implemented by the Kashag and the Tibetan Parliament in Exile. Resolved accordingly by unanimous decision of the Third Special General Meeting of Tibetans on this the 7th day of the 8th month of the Earth-Hog Tibetan Royal Year 2146, corresponding to the 5th of October 2019.

*In case of any discrepancy between this English translation and its Tibetan original, the latter should be considered authoritative and final for all purposes