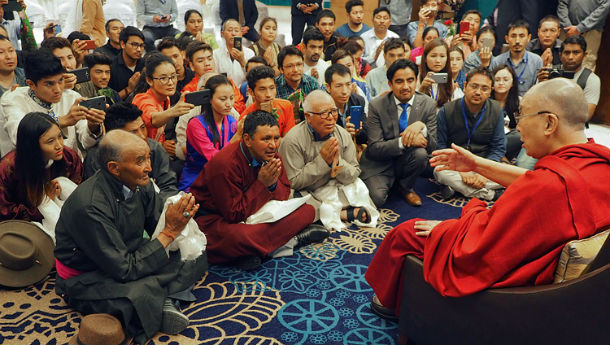 His Holiness the Dalai Lama meeting with people from Ladakh and Zanskar at his hotel in Jammu, J&K, India on March 18, 2018. Photo by Jeremy Russell

Jammu, J&K, India — Explaining the importance of needs, to be 21st century Buddhists, His Holiness the Dalai Lama asked a group of devotees from Ladakh and Zanskar to study what the Buddha taught, saying: "Recitation of mantras and prayers is not enough".

His Holiness the Dalai Lama reached Jammu by road on March 18, 2018, where he met briefly with people from Ladakh and Zanskar. He greeted them as old friends, recalling that many Tibetan scholars and translators of the past travelled through this region to India. Later, during the life of Rinchen Zangpo, Dipankara Atisha passed through here when he came to Tibet at the request of the king in Thöling.

“Although you have been keeping our more than 1000 year old Buddhist traditions alive, now you need to be 21st century Buddhists," His Holiness said, adding: "That means you have to understand what the Buddha taught, which in turn means you have to study."

"Recitation of mantras and prayers is not enough," the spiritual leader of Tibet told them that "the Buddha told his followers not to accept anything, even what he said, without investigating and examining it."

“All our various religious traditions are a source of inspiration if you follow what they teach sincerely. This is why I respect and admire them. India is a living example that harmony among our religious traditions is quite feasible, indeed it’s a tradition you’re keeping alive here in Jammu & Kashmir and I urge you to keep it up.”

His Holiness was the Chief Guest at the first convocation of Central University of Jammu. He was received on arrival at the Gen Zorawar Singh Auditorium by the Vice-Chancellor, Prof Ashok Aima. He was then escorted to where faculty and guests were putting on academic robes, prior to taking part in the academic procession into the Convocation Hall.