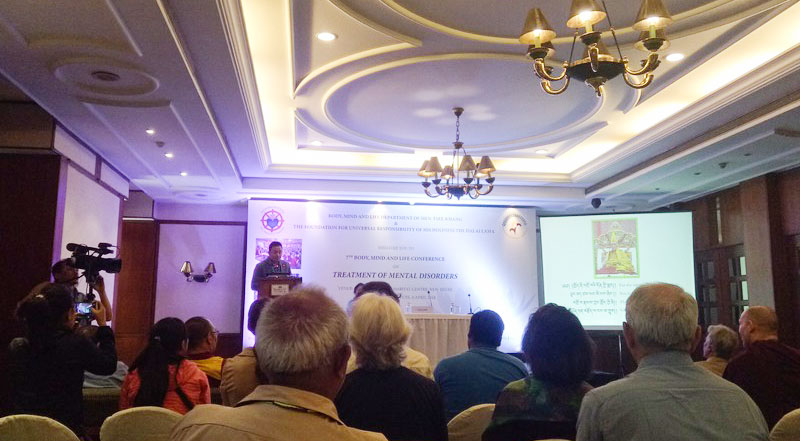 Mingyur Rinpoche told audience members to practice meditation and it will help them reduce worry, stress and disease.

"Meditation can be radiate from our heart, head and then affect our behavior," added Mingyur Rinpoche.

He said, "there are three personalities in meditation; first is body, which is vision and awareness the body, the second is speech, and third one is mind, which is emotion, for which we should meditate on kindness and compassion."

After lunch, Dr.Shakshi Raj Sharma talked on Ayurveda(Ayur-life,Veda-knowledge) saying that there are three pillars of life in the Ayurveda, they are body, mind and soul. "In Ayurveda, it is very important to know how our minds are, our thoughts, feelings, emotions, and behaviors. Having a healthy mind is just as important as having a healthy body," she added.

The second day started with Dr. Tenzin Choying who spoke on the topic of Tibetan Medicine. She said that main causes of diseases of this lifetime are Long, caused by desire and attachment, Tripa, caused by hatred and anger, and Baekan, caused by close-mindedness.

Dr Tenzin Choying continued her lecture and said, "management of lifestyle are very important; first is the body and our body should rest well, sleep, exercise, sunbath, sexual conduct and seasonal behavior while avoiding over exposure to cold and natural urges. The second is speech, vocal activities like talking and lying should be carefully and politely. The third is Mind. Meditate on defects and impurities, cultivation of living, kindness, compassion, patience, contentment, and forgiveness.

Dr Loden said, "at this time and age, the rise in mental disorders is on quite an alarming rate, yet the interest and attention it has gained is pretty much inversely proportional. Before setting into treatment aspects, it is most essential to understand the complexity part of the subject. Tibetan Astro-science takes the Buddhist idea that every entity is composite result of five elements. In its exclusive terms, all disorders are said to be caused by 1)Disturbance in five elements,2)Decline in five elements,3) Discursive thoughts and 4)Evil spirits."