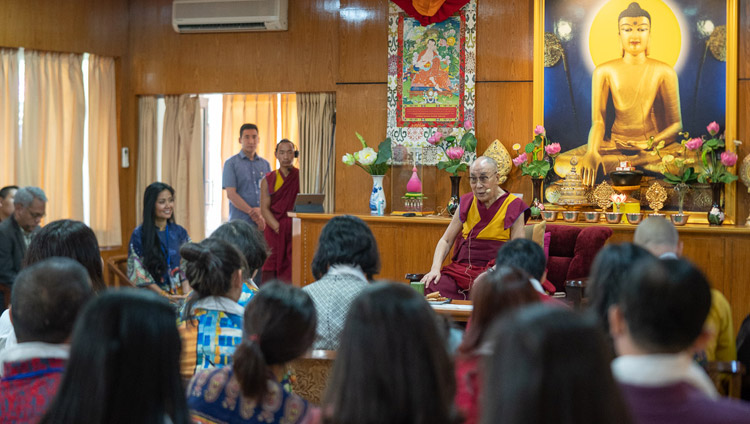 His Holiness the Dalai Lama speaking to groups from Vietnam at his residence in Dharamsala, HP, India on May 21, 2018. Photo by Tenzin Choejor

Dharamshala, India — Explaining many of the problems the world faces today arise from too much attention to secondary difference. The antidote to this is to cultivate a deeper understanding of the oneness of humanity,' His Holiness the Dalai Lama said, adding: 'we Tibetans have suffered tremendously under the Chinese authorities’ tight control. A spirit of brotherhood and sisterhood is essential for our common well-being.'

His Holiness began by emphasising the need to appreciate the oneness of humanity. He expressed regret about the extent of violence in the world and the way the poor are neglected leading to children dying of starvation.

"Meanwhile,” he added, “many of those who are otherwise well-off are neither happy nor at peace. Still, scientists finding evidence that basic human nature is compassionate is a source of hope. Virtually all of us have benefited from our mother’s affection at the start of our lives. When someone is on their deathbed, if he or she is surrounded by loved ones they can pass away peacefully. From birth to death we all need affection.

"Many of the problems we face arise because we pay too much attention to secondary differences between us. The antidote to this is to cultivate a deeper understanding of the oneness of humanity. Although we Tibetans have suffered tremendously under the Chinese authorities’ tight control, we don’t use this as an excuse for stirring up hostility towards our Chinese brothers and sisters. On the contrary, a spirit of brotherhood and sisterhood is essential for our common well-being.

"Throughout human history, divisions that derive from focussing on secondary differences between us, like faith, colour and nationality, have brought us only suffering."

Turning his attention to religious harmony, he remarked that although different religious traditions present different philosophical points of view, they share a common message of love, compassion and self-discipline, which is ground for mutual appreciation.

The kind of debate and discussion that characterised the Nalanda Tradition of Buddhism, had the effect of deepening intelligence and understanding, indicating the importance of scepticism and asking 'why' and 'how'.

His Holiness took several questions from the audience. Asked how to lead a meaningful life without getting angry, he explained that although anger appears to protect us, scientists have concluded that constant anger and hatred actually undermines our immune system. He reiterated that in resolving differences, it is important to find mutually beneficial solutions because our world is highly interdependent.

Faced with difficulties we need to be realistic. We need to take a wider perspective and examine our problems from different angles. Noting that he has lived his whole life under difficult circumstances, he stressed that he has always managed to maintain his peace of mind and keep a smile on his face.