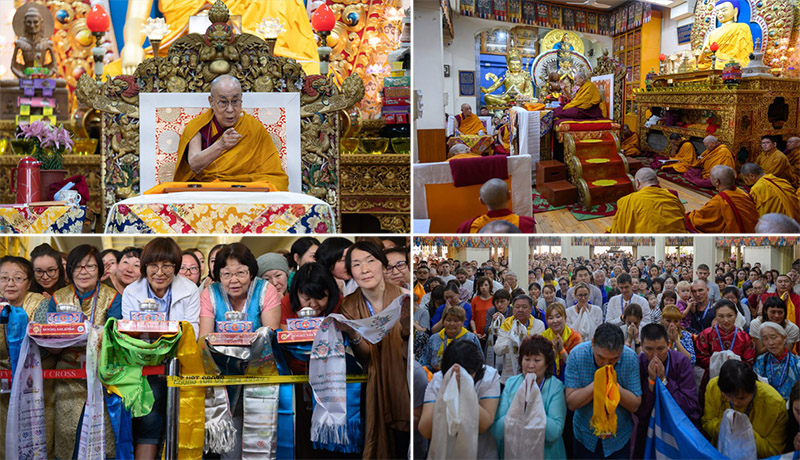 His Holiness the Dalai Lama at the main Tibetan Temple for his teachings requested by Russian Buddhists in Dharamshala, HP, India on May 10, 2019. Photo by Tenzin Choejor

Dharamshala, India — An eager crowd of more than 7600 awaited His Holiness the Dalai Lama at the main Tibetan Temple, this morning. They included people from 69 countries among them 429 from India, 254 from Israel, 194 from the USA, 147 from Britain, 137 from Germany as well as the principal group of 1100 from Russia.

His Holiness stopped to speak to several people as he walked through the yard. When he reached the temple he greeted Ganden Trisur, Rizong Rinpoché, the incumbent Ganden Tripa and others before taking his seat on the throne.

After a recitation of the ‘Heart Sutra’ in Russian, His Holiness addressed the congregation, in Dharamshala, India, on May 11, 2019. “The teaching today is mainly directed to people from Russia, including those from the Buddhist Republics of the Russian Federation, Kalmykia, Buryatia and Tuva, who have a longstanding connection with Tibet. There is a special bond between us," His Holiness said.

“Some time ago we would hold teachings for Russians in Delhi. Then some people told me that they couldn’t easily afford to come, so we arranged teachings in Riga, Latvia, that was easier for them to reach. Travelling that far has become difficult for me, so we thought of holding teachings in Delhi again," he said, adding: "However, Delhi is hot and the air is polluted so here we are in Dharamshala once more where I hope you will enjoy the clean air and the pleasant weather."

“One of the sutras records the Buddha predicting that his doctrine would travel from north to the north. First of all it spread from India to Tibet and from there to Mongolia and the Buddhist Republics of Russia. Early on, Buddhism was introduced to Tibet from China when King Songtsen Gampo married a Chinese princess who brought the Jowo statue with her. Later, King Trisong Detsen invited Shantarakshita who brought the Nalanda Tradition from India to Tibet," the spiritual leader added.

“Two main streams of Buddhism emerged in India, the Pali tradition and the Sanskrit tradition. They both have the practice of monastic discipline, the ethics of the Vinaya, in common. The Nalanda Tradition developed within the Sanskrit tradition emphasizing the study of philosophy and the disciplining of the mind on the basis of reason and logic," the Buddhist leader said, adding: "Destructive emotions were tackled on the basis of reason, especially the wisdom understanding selflessness—the selflessness of persons and of phenomena.“

His Holiness said that “Eventually the Middle Way School (Madhyamaka) asserted that phenomena exist only by way of designation. This and the assertion that things do not exist the way they appear are comparable to the quantum physics’ observation that nothing has any objective existence.”

His Holiness reiterated that the Nalanda Tradition had been conveyed first to Tibet, then to Mongolia and on to the Russian Buddhist Republics. Historically these regions produced thousands of great scholars.

“When I was preparing for my Geshé exam I read many books by such scholars. One of my debating assistants, a scholar from Inner Mongolia called Ngodup Tsognyi, really inspired me to take an interest in the Middle Way view. These days we have several hundred Mongolians studying in the great monasteries in the south of India," His Holiness said.

“The Nalanda Tradition makes extensive use of logic in accordance with the Buddha’s advice: ‘As the wise test gold by burning, cutting and rubbing it, So, bhikshus, should you accept my words—after testing them, and not merely out of respect for me.’ The Nalanda Masters subjected the Buddha’s words to logical scrutiny in order to verify them," the Tibetan leader said.

"Only when they were satisfied by reason and experiment did they accept them. The Buddha is the only religious teacher to have encouraged his followers to be sceptical in this way. And this is scepticism is what makes the Nalanda Tradition attractive to scientists," he added.

“Today, in many parts of the world, when it is so much easier to exchange information, more and more people are taking an interest in Buddhism—European Russians as well as traditionally Buddhist Russians. There are also Russian scientists interested in investigating the mind,” the spiritual leader of Tibet said.

His Holiness repeated advice he often gives that followers of the Buddha today should try to be 21st century Buddhists. He declared that to take refuge in the Three Jewels without understanding is insufficient. "Buddhism has unique philosophical points of view, but also teaches the importance of ahimsa or non-violence as a code of conduct. If ahimsa, motivated by karuna or compassion, were more a part of our lives there would be less conflict in the world and we could better address problems like the gap between rich and poor," he said.

His Holiness observed that the classic works of the great Nalanda masters and commentaries to them by Tibetan and Mongolian scholars contain insight and knowledge that could well be studied in an objective, academic way.

“The book I was going to go through with you here is ‘The Changeless Nature’ or Uttaratantra, but it may be too long for the time we have available. It refers to the ‘Tathagatagarbha Sutra’ or the ‘Buddha-nature Sutra’ which was part of the Buddha’s third round of teachings," he said, further added: "The second round dealt with the Perfection of Wisdom teachings and in the first round he expounded the Four Noble Truths."

“Gungtang Tenpai Drönmé remarked that the three turnings of the wheel of dharma, or the three rounds of the Buddha’s teachings, are like climbing a mountain, starting at the base and continuing on to the summit," he told the gathered devotees.

"The Perfection of Wisdom teachings of the second round discuss emptiness or the object clear light, but the third round, especially the ‘Tathagatagarbha Sutra’, emphasizes the subjective mind of clear light. We need to learn how to progress along the path according to these three rounds of teachings," His Holiness added.

“Soon after his enlightenment the Buddha is said to have expressed his thoughts as follows: ‘Profound and peaceful, free from elaboration, uncompounded clear light, I have found a nectar-like Dharma. Yet if I were to teach it, no-one would understand what I said, so I shall remain silent here in the forest.' We can understand this verse as anticipating the teachings he would eventually give. ‘Profound and peaceful’ refers to the first round of the Buddha’s teachings; ‘free from complexity’ refers to content of the second round, while ‘uncompounded luminosity’ refers to the third round," he said.

He said that "the ‘Tathagatagarbha Sutra’ explains how the clear light mind, ‘uncompounded luminosity’ has existed for beginningless time; it’s always been there. This is also referred to in the Guhyasamaja Tantra and the four empty states, as well as in a commentary to the ‘Mahaparinirvana Sutra’ composed by the Seventh Dalai Lama. This clear light mind is the main subject of the ‘Uttaratantra’ and the seven vajra points with emphasis on the spontaneously arisen mind of clear light."

“It is comparable to what you find in the Nine Vehicles of the Nyingma tradition, the Hearer, Solitary Realizer and Bodhisattva vehicles, the three outer tantras—Kriya, Charya and Yoga tantras and the three inner Tantras—Maha, Anu and Ati Yogas," he added, saying "Mahayoga corresponds to the generation stage, Anuyoga to the completion stage, while Atiyoga takes the basic luminous nature of the mind into the path, as is also described in the Guhyasamajatantra.”

His Holiness stopped there for the day and returned to his residence. Yangden Rinpoché taught for the rest of the morning and conducted a session reviewing what His Holiness had said in the afternoon.