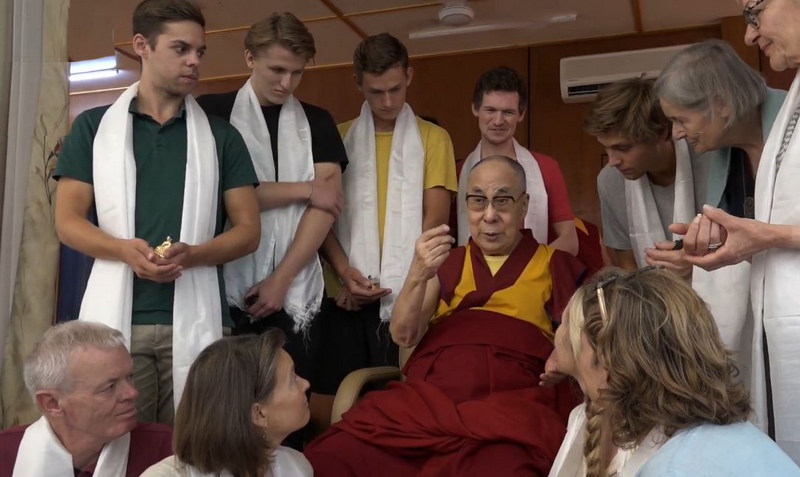 His Holiness the Dalai Lama speaking to a group from Denmark, at his residence in Dharamshala, HP, India, on September 11, 2019. Photo: TPI

Dharamshala, India — “Because of Buddha’s scientific approach to religion, he could be referred to as someone who was a teacher, philosopher, and scientist,” remarked His Holiness the Dalai Lama while speaking to a group from Denmark about the Buddha as a teacher, philosopher and scientist, and the importance of doing a thorough investigation over just having faith, September 11, 2019.

His Holiness the Dalai Lama's comments came as he met a group from Denmark at his residence and accorded them a brief explanation on Buddha and Buddhism. His Holiness said Buddhism is not entirely a religious faith alone rather it is more like a science of mind as it offers room for reasoning and logic. His Holiness informed that even Buddha himself asserted his followers to accept his teaching only after performing thorough investigation and experiment as opposed to just following it out faith alone.

“Because of Buddha’s scientific approach to religion, he could be referred to as someone who was a teacher, philosopher, and scientist,” remarked His Holiness the Dalai Lama. His Holiness further hailed Buddha as the ancient Indian scientist largely owning to his scientific thinking which he developed 2500 years ago.

His Holiness the Dalai Lama talks to a delegation from Denmark about the Buddha and Buddhism during their meeting at his residence in Dharamsala, HP, India on September 11, 2019. The spiritual leader of Tibet told them that Buddha was a teacher, philosopher and scientist, and the importance of doing a thorough investigation over just having faith.

Speaking to the delegates who were holding a small Buddha statue, the Nobel Peace Prize laureate said: ‘To Buddhist, of course, this is Buddha Shakyamuni. One aspect of his teachings is quite scientific. One great Indian nuclear physicist, late Raja Ramana, once told me that quantum physic in the west is something new.’

But in this country, in India, over 200 years ago, quantum physics had already developed. And he mentioned a few sentences from Mula-Madhyamaka-Karika written by Nagarjuna, one of the most famous Buddhist philosophers and was even considered as the greatest Buddhist philosopher after Buddha himself.

‘So this person (the Buddha) was in one way a great thinker, a great philosopher. And then he always told his followers not to accept his teachings on the basis of faith alone. As I mentioned earlier but only after thorough investigation and experiment. So from that viewpoint, 2500 years ago, the Buddha’s thinking was very scientific. We also need to experiment, not faith alone. So I always consider the Buddha to be an ancient Indian scientist.’