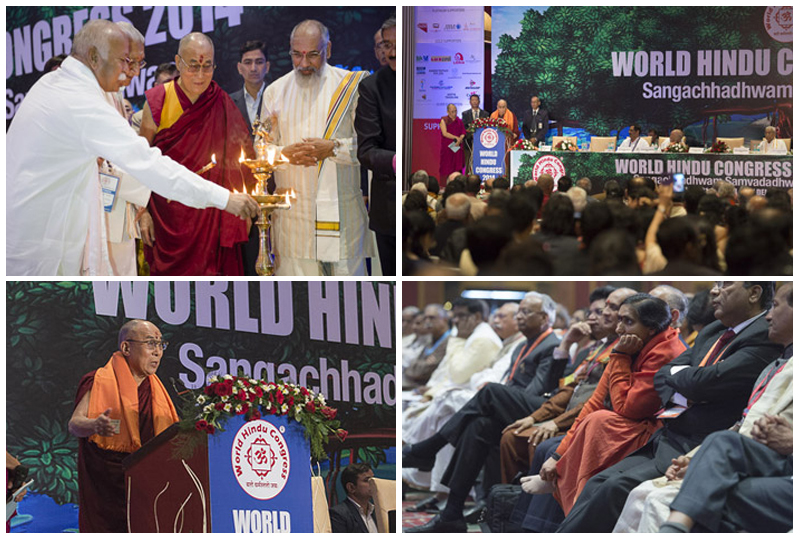 New Delhi: - The spiritual leader of Tibet His Holiness the Dalai Lama said 'Technology makes our life easier and brings people closer together, but we must use it constructively.'

His Holiness the Dalai Lama on Friday 21 November 2014 met with a representative of one of the world's oldest religious traditions, a Parsee or Zoroastrian. He and Dr Homi B Dhalla first encountered one another when they were both guests of Pope John Paul II in Assisi in 1986.

They have met several times since. On this occasion Dr Dhalla wanted to ask His Holiness several questions in connection with a documentary film he is making about peace and human rights.

He began by asking how, besides engaging in dialogue, we can put an end to violence. His Holiness replied that violence is directly related to our destructive emotions. Anger, fear, jealousy and to some extent greed are sources of violence. If we do not deal with such emotions, violence will continue.

There is a need to educate people to understand that violence is socially disruptive, as well as being bad for our health and destructive of our peace of mind. In connection with violence against women, His Holiness said that of course it is wrong. Despite entrenched notions of male superiority, men and women need each other. In recent times, education has introduced a greater sense of equality.

Asked about young people's relationship with technology, His Holiness was unequivocal in his appreciation.

"Technology is good. It makes life easier and brings people closer together. But we must use it constructively."

Young people can help create wider awareness that we all want to live a happy life. We all need affection. Therefore, it is very helpful to acknowledge the oneness of humanity.

When Dr Dhalla asked about Tibet, His Holiness told him that archaeology indicates the great antiquity of people in Tibet.

"In the 7th century and before, we developed our own mode of writing, which makes Tibetan one of the world's oldest scripts. We have collections of books translated into Tibetan, but what's more, we rigorously study these texts. Meanwhile Chinese hardliners being suspicious that a separate mode of writing and literature implies separatism, so they restrict them where they can."

Driving to the Ashoka Hotel on the edge of Delhi's diplomatic quarter, His Holiness was welcomed by members of the organizing committee for the 1st World Hindu Congress (WHC2014). He was escorted to the daïs. The Congress opened with a Swami blowing a long blast on a conch and was formally inaugurated with the lighting of the lamp. Joint General Secretary of the VHP, Swami Vigyananand spoke to explain why the World Hindu Congress was being held. He looked forward to a resurgence of prosperity and influence for the Hindu community across the world, saying:

"Good things do not happen of their own accord, we have to make them happen."

Sajjan Bhajanka, Chairperson of the Organizing Committee (WHC2014) expressed a warm welcome to everyone present, to His Holiness, Mohanrao Bhagwat and Ashok Singhal, the Chief Guests, and to the 1800 delegates from 50 countries. He mentioned the Congress's intention to honour three individuals: His Holiness the Dalai Lama, Pujya Swami Dayanand Sarasvati and Ashok Singhal.

The citation for His Holiness described him as a manifestation of Avalokiteshvara, the Bodhisattva of Compassion, as someone who has already been awarded the Nobel Peace Prize and the Magaysay Award, who has established schools, monasteries and institutions such as the Library of Tibetan Works & Archives and who has propagated the Dharma of truth and compassion. Mohanrao Bhagwat and Ashok Singhal were called upon to offer him the saffron shawl and certificate.

Swami Dayanand Saraswati's health did not permit him to travel, so he asked that his disciple accept the award on his behalf. Ashok Singhal declined to be honoured.

Requested to offer the Congress's inaugural address, His Holiness began:
"Dear spiritual brothers and sisters, it's a great honour for me to participate in this World Hindu Congress since I consider myself to be just another human being. I always emphasize that we 7 billion human beings are the same, mentally, physically and emotionally. Whether we are kings or queens, beggars or spiritual leaders, we are all born the same way. We depart for the next destination in the same way. However, because we tend to forget this sameness, we stress instead the secondary differences between us. We think of each other in terms of 'us' and 'them'. Nevertheless, we should remember that if and when we escape a natural disaster and encounter someone else, we willingly greet them as a fellow human being with no concern for where they come from or what they believe. Children too embrace each other as fellows without concern for differences between them."

He pointed out that today we face all kinds of problems, war and violence for example, problems that we created. In trying to address such problems we're much better to emphasize that we are all human beings. We all want to lead a happy life and just as we value human affection, so do others too. Indeed, our lives begin and we survive in an atmosphere of affection. If we think of the oneness of 7 billion human beings in this context, there is nothing to divide us.

His Holiness remarked that despite philosophical differences between them, he views all major religious traditions as conducive to peace of mind. He mentioned the Samkhya-Yoga, Jaina, Nyaya-Vaishesika, Mimamsa-Vedanta and Charvaka schools of ancient Indian thought. He suggested that they illustrate that in comparison with the ancient civilizations of Egypt and China, the Indus Valley civilization ultimately produced a larger number of great thinkers.

"I am a student of the Nalanda tradition and a Buddhist monk. I've studied a bit, but by and large have been a lazy student. However, I have great admiration for the scholars and spiritual practitioners of ancient India. I read and admire their writings, which reveal that they used their human brains to the maximum. In the writings of Aryadeva, Bhavaviveka, Dignaga and Dharmakirti there is much debate and analysis of different traditions. Their writings are lucid. It's clear that Buddhist knowledge advanced in response to the intellectual challenge from other schools and that non-Buddhist schools also developed accordingly.

"The renowned Indian physicist Raja Ramana once told me with pride that he had found explanations in the writings of ancient Indian scholars that correspond to what quantum physics has to say today. And what made him particularly proud is that what is regarded as fresh and new in these ideas among scientists today was known to Indian thinkers long ago.

"I always say that we Tibetans regard Indians as our gurus. All our knowledge came from India. One great Tibetan scholar of the 15th century said that despite the whiteness prevailing in the Land of Snow, until the coming of light from India, in the form of knowledge, Tibet remained in the dark. I sometimes jokingly say that it is ancient Indians who we regard as gurus rather than modern Indians who have become somewhat Westernized. But now you too are trying to revive and preserve your centuries old traditions and I appreciate that."

His Holiness spoke of the dialogue he has opened with modern scientists over the last more than 30 years, focussing on cosmology, physics, neurobiology and psychology. This has revealed that compared to the highly developed psychology of ancient India, modern psychology has barely reached kindergarten level. In this connection it is not sufficient therefore to conduct rituals for days. In addition to temples, there is a need for places to study and discuss things at a deeper level. We need to know more about our mind and emotions, for this is knowledge that leads to inner peace. If we learn to tackle our destructive emotions, we can really begin to create a more compassionate world.

"We Tibetans are the chelas or disciples, but I think we can say we have been reliable chelas. We have preserved intact knowledge that our gurus have lately neglected. My request to you is to pay more attention to this ancient knowledge wherever you have established temples and other institutions. This is a real contribution you can make across the world."

His Holiness spoke of Buddhism and Hinduism as like spiritual brothers, which provoked cheers throughout the hall. He said they share shila, shamatha and prajna - ethics, concentration and wisdom - and where they differ is in the view of atman or anatman. He recalled meeting a spiritual leader in Bangalore a couple of years ago, a good man who organizes food for the poor on a large scale. They discussed the correspondences of their spiritual traditions until His Holiness acknowledged that for him, a Buddhist monk, anatman is more appropriate; for his friend, a Hindu monk, it is the view of atman that appeals. But, he said, whichever view they choose is their own personal decision.

He reiterated that all major religious traditions teach compassion, forgiveness and self-discipline. For those who propound belief in a creator, single-pointed faith is God is a powerful practice. For those who believe in causality it is powerful to understand that if you do good you will benefit and if you do bad you will suffer. The aim, the goal of all these traditions is to benefit humanity, therefore, His Holiness said he makes great effort to promote inter-religious harmony. Mentioning an occasion in Australia when a Christian friend introduced His Holiness as a good Christian and he in his turn said he regarded his Australian friend as a good Buddhist, he ventured to suggest that here he might claim to be a good Hindu.

His Holiness also remarked that there is a great deal in common between Hindu and Buddhist tantras. He told the gathering how keen he was to discuss actual experience with the practitioners who spend years high in the mountains. When Ashok Singhal invited him to attend the last Mahakumbh Mela he looked forward to that opportunity, but sadly the weather did not permit him to travel.

"Such opportunities allow the development of mutual understanding and with that comes mutual respect, which is the basis of harmony. Is that clear? That's all, thank you."