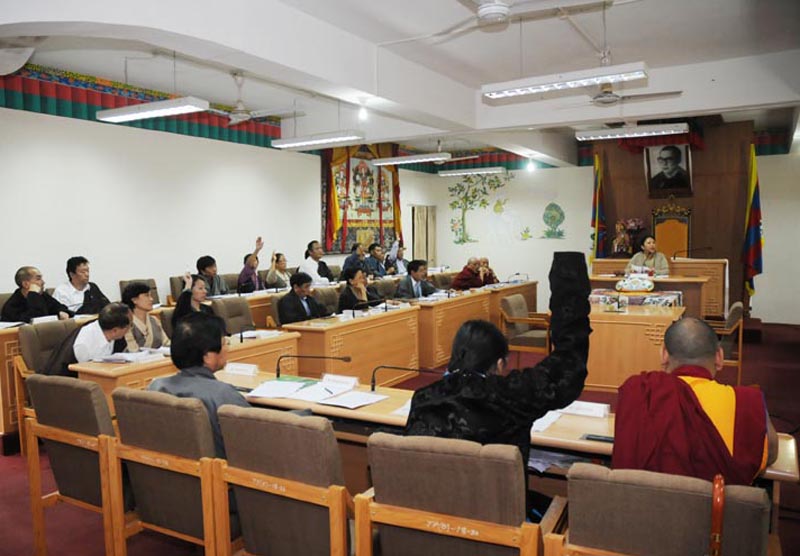 Dharamshala: A motion to withdraw the two-term limit for the post of Kalon Tripa (Prime Minister) of the Tibetan government-in-exile was rejected by the Tibetan parliament on Thursday.

Bill 3G, Resolution 21, Article 49, of the Charter for Tibetans-in-exile states that a person cannot be elected prime minister for a third term in a row. The motion proposed to withdraw this limit and introduce new legislation.

The intent behind the motion was to enable incumbent Prime Minister Samdhong Rinpoche to take up another five years in office. According to the Speaker, Penpa Tsering, this has been called for by many Tibetans living in exile. Around 960 Tibetans from Mundgod Tibetan settlement, along with others from Hunsur Rabgyal-Ling settlement, signed a petition pleading for another term for Rinpoche. Of the 150,000 Tibetans in exile, it is unclear what percentage would support such a change.

However, Prime Minister Rinpoche did not think it would be healthy for him to remain in office, saying it was unfortunate the issue had come up at all as it would be a regressive step for the fledgling Tibetan democracy.

He added that the timing of the motion was wrong, since the exile community has been actively engaged in campaigning for his successor. “The timing of the proposal creates doubts in the minds of people," he said. "It may also create conflict between individuals.”

Rinpoche (71) has been prime minister since 2001 and will finish his second term in August next year. Indicating his unwillingness to continue in the post, he said, “Nobody can take away my personal freedom.”

The motion was introduced by Tsering Yudon and supported by Dawa Tsering. A two-thirds majority is required to amend the charter, but only eleven out of 43 members of parliament (MPs) voted for the motion. 27 MPs attended the session, with 16 on leave.

In his rejection of the proposal, Amdo MP Tenzin Gonpo said that countries where presidential and prime ministerial terms are limited have less corruption and are more successful.

Some commentators have concluded that those who supported the motion in the name of the public mandate were actually seeking to impress the voters as the general elections approach.

On October 3, Tibetans will go to the polls for the preliminary round of elections for prime minister and MPs. This will be the third time the posts have been directly elected by the public. The final round will be held on March 20 next year.