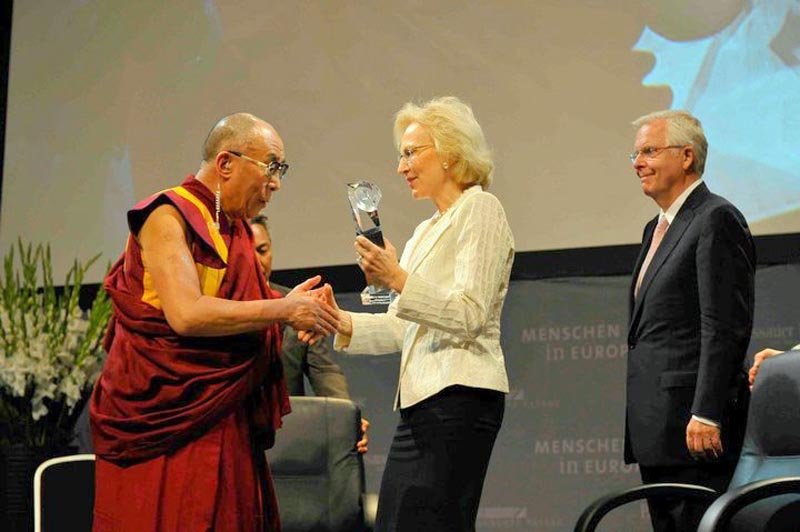 Dharamshala: His Holiness the Dalai Lama arrived in Germany yesterday, following his tour of Hungary, to be honoured with the Menschen in Europa award - a symbol of peace and tolerance. At the ceremony in Passau, Roland Koch, former premier of the German state of Hesse, declared that China should not pass up any opportunity to hold talks with Tibetan spiritual leader.

The Menschen In Europa Award was inaugurated by Verlagsgruppe Passau in 1996, with the aim of bringing together artists, religious leaders, heads of busines and politicians in an open discussion forum. Previous winners include designer Karl Lagerfeld, German Chancellor Angela Merkel and former UN Secretary General Kofi Annan.

In his speech Mr Koch remarked that His Holiness stands for non-violence and that failure to support him is akin to promoting the rule of the gun. During his time as premier of Hesse, Mr Koch became good friends with His Holiness and a special relationship was formed between Germany and Tibet. He urged the international community to stand up and support the cause of the Tibetan people.

In accepting the award, His Holiness reflected on the strong bond he has felt with Germany since his childhood, saying, "You built a new nation from ashes. From immense destruction you have built a strong economy and developed a good democratic system. I admire you all."

Speaking to an audience of 3,500, he went on to discuss the education system, which he said should be based on secular values and moral ethics, without disrespecting religion.

In response to a question from the moderator he said the Tibetan issue is not about the institution of the Dalai Lama but the issue of six million Tibetans. He said he is just a simple person in whom the Tibetan people have placed their trust to spread the message, but that China subverts the issue, saying it is about the Dalai Lama rather than Tibet.

His Holiness also said that, after the 20th century being an era of war, the 21st century should be a time of peace and dialogue, adding that although conflict will not come to an end, the goal for both sides in any conflict should be to find an acceptable solution.