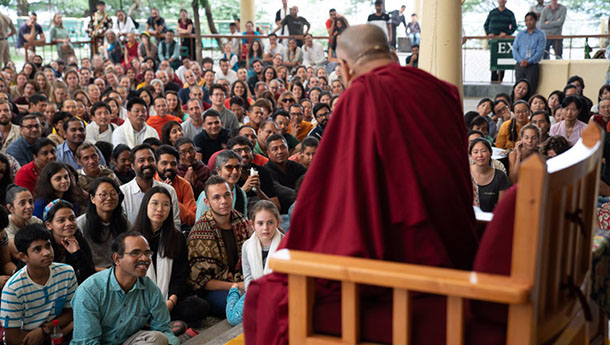 Dharamshala, India — “The only way to really solve human problems is to meet, talk and engage in dialogue," His Holiness the Dalai Lama said, adding: "Only if we’re prepared to depend on dialogue will be able to create a more peaceful world.”

Following three days of teachings for young Tibetans, His Holiness the Dalai Lama met Saturday morning with an estimated 1200 people in the yard of the Main Tibetan Temple adjacent to his residence. There were about 1000 visitors from India and abroad, as well as 200 Tibetans. He first posed for photographs with smaller groups of people arranged by geographical location before sitting down on a chair beneath the temple.

His Holiness observed to begin with that since he had just taught for three days and many of those sitting before him had probably attended he had little to say. Nevertheless, he made some remarks before inviting questions from the audience.

“The Nalanda Tradition, of which Tibetan Buddhism is very much part, made thorough use of logic and reason. This involves investigating what the Buddha said and why he said it. The result of such investigation is a clearer and firmer understanding. As a result of their examination of the records of Buddha’s teaching Nalanda masters like Nagarjuna and Chandrakirti declared that some of them could not be accepted literally because they contradicted reason.

“Following the introduction of Buddhism to Tibet in the 8th century by the great philosopher and logician Shantarakshita, we Tibetans adopted a similarly rigorous approach. Since Tibetan is probably the classical language closest to Sanskrit, it remains the most accurate means available to us today for expressing Buddhist ideas. Although the Nalanda Tradition has been somewhat neglected in India, it was kept alive in Tibet.”

The first question from the audience concerned psychology and how it can be combined with Buddhist methods for cultivating compassion. His Holiness replied that ancient India knowledge of the workings of the mind and emotions is rich and deep. He reaffirmed that he is trying to revive appreciation of it because in India it has fallen into neglect. He recommended reading Akya Yongzin’s ‘Compendium of the Ways of Knowing’.

Another questioner asked how to strengthen equality and His Holiness reported that scientists assert that basic human nature is compassionate and this seems to be borne out by the way children respond. So long as their companions smile and behave in a friendly way they don’t seem to care about what their nationality, race or family faith may be.

“As we grow up and pursue our education,” he suggested, “we learn to disregard our basic human values. Instead we pay disproportionate attention to secondary differences, which here in India includes caste distinctions and whether people are rich or poor. These observations give rise to a lot of problems, especially in light of the fact that essentially human beings are physically, mentally and emotionally the same. At the same time I have great admiration for the way India still manages to find unity in diversity. What’s more, compared to her several neighbours, India is remarkably stable.

“Likewise I have great respect for the way leading members of the European Union, France and Germany for example, decided that the common interest was more important than national sovereignty. Where they had long been historical enemies, attitudes have completely changed and peace has prevailed among the members of the EU for 70 years.”

His Holiness mentioned that modern education has little time for what he refers to as inner values, nor for explanations of the workings of the mind and emotions. He noted that just as we observe physical hygiene to preserve our health, we also need to cultivate emotional hygiene to maintain our peace of mind. He remarked that if our lives were filled with anger we’d find it difficult to survive.

“Through education and training we can extend our basic human nature. This brings self-confidence, which is important and allows us to be more transparent, leading to trust, which is the foundation of firm friendship. It’s true to say that loving kindness is of value right from birth up to the time of our death.”

Asked how to reconcile science and religion, His Holiness referred to Indian sources that focus on the gap between appearance and reality. To understand reality requires investigation not just acceptance of things the way they appear. The self, which may appear to exist independently, is described in the Buddhist view as merely designated on the basis of body and mind.

An eight year old girl asked His Holiness what advice he would have had for himself when he was her age. He told her he had been a naughty boy with no interest in studying. All he wanted to do was play and run here and there. He’d been such a tearaway that his tutor was shocked to see his shoes in tatters. He conceded that he later came to appreciate the value of studying and applied himself to it.

“I belong to the generation of the 20th century,” he said, “and my time is gone, but we’re still near the beginning of the 21st century when we can think seriously about whether we want to repeat what went before in terms of people suffering and dying of violence. There is still time to follow the Indian traditions of karuna and ahimsa, a compassionate motivation expressed in non-violent conduct.”

A young man who is undertaking a meditation course asked about vegetarianism in the context of the avowed Buddhist prayer for the welfare of all sentient beings. His Holiness first pointed out that although Tibetans sincerely make such prayers, when they were in Tibet there were few vegetables and little non-vegetarian food. However, living in exile in India they had many other options. He explained that the main kitchens of the great re-established monasteries prepared only vegetarian food. At the same time efforts had been made to avoid poultry and pig farming in Tibetan settlements.

Then, His Holiness changed the direction of the conversation. “We also have to make an effort to reduce the trade in weapons. We need to create a demilitarized world. Some problems may be solved by the use of force, but in general it just perpetuates problems. Violence engenders counter violence in a seemingly endless cycle.

“I love America, which I regard as an important leader of the free world, and I’m great friends with George W Bush. The day after 9/11 I wrote to him expressing my profound condolences but also the hope that any response to the attack would avoid further violence. Eventually Iraq was attacked and when we met afterwards I told him of my affection for him, but also of my reservations about some of his policies. The intention to bring democracy to Iraq was admirable; the use of force was not.

“The only way to really solve human problems is to meet, talk and engage in dialogue. Only if we’re prepared to depend on dialogue will be able to create a more peaceful world.”