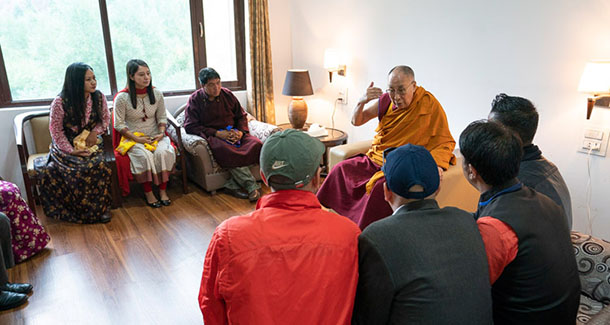 His Holiness the Dalai Lama speaking with members of the media at his hotel in Kargil, Ladakh, J&K, India on July 26, 2018. Photo by Tenzin Choejor

Ladakh, J&K, India — 'Irrespective of whether we have faith in religion or not, it’s good to be more compassionate,' His Holiness the Dalai Lama told the media. 'It makes us happier as individuals with a positive influence on our families and the neighbourhood where we live.'

During his visit to Kargil city in the Kargil district of Ladakh region, in the Indian state of Jammu and Kashmir, His Holiness also took the opportunity to interact with members of the media at his hotel in Kargil, Ladakh, J&K, India, on July 26, 2018. His Holiness first outlined his three commitments.

“As a human being I’m aware that we are all physically, mentally and emotionally the same and we all want to live a happy life. Scientists say our basic nature is compassionate. It’s clear that love and affection bring people together. Even animals show limited altruism towards their companions. Elephants seem to mourn when one of the herd dies," His Holiness said while speaking to members of the media.

“Most of us enjoy tremendous love and affection from our mothers when we are born. And it’s from her that we receive the first seed of compassion. Irrespective of whether we have faith in religion or not, it’s good to be more compassionate," the Tibetan Nobel Prize laureate said.

The spiritual leader of Tibet said that being compassionate "makes us happier as individuals with a positive influence on our families and the neighbourhood where we live. When someone who has lived a kind life dies, people miss them and say so. But when an angry, greedily ambitious, ruthless person dies, there’s a sense of relief. So, I try to practice warm-heartedness wherever I go."

“My second commitment is to encouraging inter-religious harmony and the third is to protect the natural environment. These are areas where I think members of the media have a responsibility to alert and educate the public.”

The first questioner told His Holiness how happy people were that he was making his second visit to Kargil. He replied that he had been impressed and touched by the close attention people had paid to what he said in Hussaini Park on that day.

The spiritual leader also reiterated discussions he has had recently about the possibility of convening an All India Muslim Conference, with a view to sharing with Muslim brothers and sisters in other parts of the world how Muslims in India live in harmony among other faiths and how there is no quarrel between Sunni and Shia branches of Islam.

A young woman asked about friendship and His Holiness told her that real, lasting friendship is based on trust and trust grows when you show concern for others’ well being. He recalled the advice of a Christian priest he knows, a marriage guidance councellor, who told him he often advises couples not to rush into marriage, but to get to know each other first. Developing trust and respect for one another is a much sounder basis for a lasting marriage than simple physical attraction.

With regard to settling conflict in the world, His Holiness was firm in opposing the use of force and encouraging dialogue. Whenever he talks about wars and violence, the Nobel Peace Laureate always says "the use of force is a last resort. One aspect of violence is that it is unpredictable. Although your initial intention may be to use limited force, once you have engaged in violence the consequences are unpredictable. Violence always brings about unexpected results and almost always provokes retaliation."