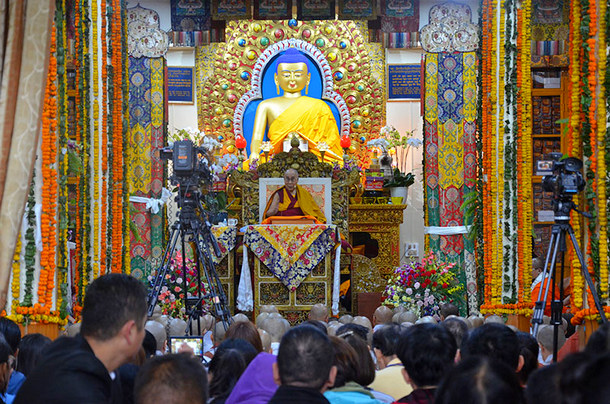 His Holiness the Dalai Lama speaking on the first day of his four day teaching at the request of groups from Southeast Asia at the Main Tibetan Temple in Dharamsala, HP, India on September 4, 2018. Photo: TPI/Yangchen Dolma

Dharamshala, India — The spiritual leader of Tibet, His Holiness the 14th Dalai Lama, recalls a humorous moment in his life as he addresses thousands at his residence in Dharamsala, India on September 4, 2018. He delivered a message of stressing compassion and peace of mind at the main Tibetan temple in Dharamshala, India.

His Holiness the Dalai Lama Tuesday began his four day teaching on Buddhapalita's "Commentary on the Fundamental Wisdom of the Middle Way" at the request of a group from Asia including Indonesia, Korea, Malaysia, Singapore, Thailand and Vietnam at the Main Tibetan Temple in Dharamsala, HP, India on September 4-7, 2018. His Holiness waved to the crowd, greeted senior Thai and Korean monks, as well as the senior Buddhist monks, before taking his seat on the throne. The Mangala Sutta was recited first in Pali by a group of Thai monks, after which the ‘Heart Sutra’ was chanted in Chinese.

His Holiness recited verses of salutation to the Buddha from ‘Ornament for Clear Realization’ and Nagarjuna’s ‘Fundamental Wisdom of the Middle Way’. “Many people have gathered here from East and South-east Asia for this teaching,” he began as he looked out over the audience, “amongst whom are monks from countries who traditionally follow the Pali tradition. I greet you all.

An estimated 6000 people awaited him in the Main Temple, its surroundings and in the yard below. Of these, 1200 were from East and South-east Asian countries---Korea, Malaysia, Vietnam, Thailand, Indonesia and Singapore, including ordained and lay-people. Of an estimated 1700 people from 71 countries in other parts of the world, the largest contingent was from Israel.

“Now, what I usually talk about, wherever I am in the world, is that I am a human being; just one among many. If the people of the world are happy, I’m happy. When the world is in turmoil, I’m sad. We human beings are all the same in wanting to be happy and not wanting to suffer and yet many of the problems we face are of our own making. We seek happiness in external things without realizing that they don’t help when we have problems within. We need to focus instead on the joy that comes with peace of mind that allows us to remain happy whatever happens.

“At the monastery of Montserrat, near Barcelona, I met a monk who had asked to see me. He had been living the life of a hermit in the mountains, surviving only on tea and bread. I asked him about his practice and he told me he’d been meditating on love. As he said this, I could see from the sparkle in his eyes that, despite renouncing physical comfort, he was full of joy.

“Among Tibetans too there were some imprisoned during the ‘cultural revolution’, who valued the opportunity to do their practice. One who I knew well told me that there were times he felt in danger and I asked him to explain, thinking he meant his life was at risk. Instead he told me there were times he was in danger of losing compassion for his tormentors.

“We have made great physical progress in many areas, but this hasn’t necessarily translated into greater peace of mind. However, scientists have lately found evidence to assert that basic human nature is compassionate, which I take as a sign of hope. Meanwhile they have also found that constant anger, fear and anxiety deplete our immune system.”

His Holiness noted that a mother gave birth to each and every one of us. During our early years we survived due to her kindness. Right from the beginning of our lives the love and affection we received from her empowered us to feel calm and secure. He suggested that the innate sense of love and compassion we have as a result can be strengthened and extended by training.

“Whoever I meet, I think of them as another human being just like me. We are physically, mentally and emotionally the same. If we remember that other people are essentially like us, we won’t view them with hostility. As social animals we are dependent on the community in which we live. While love and compassion bring peace of mind and attract friends to us, anger drives people away. So, not only do I advise others to cultivate these qualities, because they are so important, I try to put them into practice myself.

“As a Buddhist practitioner I invite all sentient beings to be my guests at a feast of happiness. I cultivate the four immeasurable wishes—generating equanimity, love, compassion, and joy towards an immeasurable number of sentient beings—every day. We pray that sentient beings experience no suffering, yet the only beings we can really help directly are the human beings with whom we share this earth. We can only pray for beings in other galaxies and can do little to help the animals, insects and fish around us achieve liberation.”

His Holiness remarked that as a Buddhist practitioner he also seeks to promote inter-religious harmony. He explained that religious traditions are concerned with human behaviour. They convey a common message of love and yet today we hear repeatedly of fighting and killing in the name of religion. He pointed out that here in India over the last 3000 years and more, traditions have emerged that counsel love, compassion, self-discipline and tolerance. They adopt different philosophical positions because people have different dispositions.

“Whether or not you observe religious belief and practice is a personal matter, but if make such a choice it’s better to be sincere about it. If someone follows a religion based on love sincerely, how could they kill in the name of religion?”

During a short comfort break, His Holiness answered several questions from the audience, advising that Chapter Six of ‘Guide to the Bodhisattva’s Way of Life’ gives explicit instructions on how to deal with anger. He also touched on the understanding of the workings of the mind and emotions that has evolved in India in the pursuit of calm abiding (shamatha) and penetrative insight (vipashyana). He stated his belief that in India it should be possible to combine modern education with such ancient knowledge.

His Holiness recalled that Buddhism originated in India and that the Pali tradition spread to Sri Lanka, Thailand, Burma, Laos and Cambodia, where the Vinaya continues to be strictly upheld. The Sanskrit tradition, meanwhile, which was fostered in the universities of Takshashila, Nalanda and Vikramashila spread to China and from there to Korea, Japan and Vietnam. His Holiness mentioned that when the Chinese monk and scholar Xuanzang came to India, Nagabodhi, a disciple of Nagarjuna, was still alive. The Chinese adopted Nagarjuna’s ideas, but not the system of logic and reason that supported them.

In the 8th century, the great scholar, logician and philosopher, Shantarakshita established the Nalanda Tradition in Tibet. From Tibet this approach to study and training spread to Mongolia and the Mongolian Russian Republics. Crucial to this tradition were the Perfection of Wisdom teachings of the second turning of the wheel of dharma that assert that things have no objective existence, contrary to the way they appear to us.

Taking up Buddhapalita’s commentary, His Holiness mentioned that Buddhapalita was a disciple of Nagarjuna and Aryadeva. He remarked that he had received explanation of this text and Chandrakirti’s ‘Clear Words’ from the former Ganden Throne-holder, Rizong Rinpoche. This text, Buddhapalitavrtti, is an explanatory commentary on Nagarjuna’s ‘Fundamental Wisdom of the Middle Way’.

He observed that although monks in Tibetan monastic universities study the commentary, they pay less attention to the root text, ‘Fundamental Wisdom’. Noting that Chapters 18 and 24 are the most important, he recommended that a student might begin by reading Chapter 26 which discusses the Twelve Links of Dependent Arising which in forward and reverse processes show how ignorance binds us in the cycle of existence. To put an end to that, Chapter 18 explains how to overcome karma and mental afflictions, while Chapter 24 reveals how to understand emptiness.

Having completed Chapter 6 of ‘Buddhapalitavrtti’ last year, His Holiness began to read from Chapter 7, which touches on the characteristics of phenomena and the difficulty of pinpointing the present moment. His Holiness remarked that the different modes of reasoning for demonstrating emptiness such as the Diamond Slivers are all based on dependent arising. In the verse of salutation in ‘Fundamental Wisdom’ Nagarjuna praises the Buddha for teaching dependent arising. Je Tsongkhapa praises the Buddha likewise.