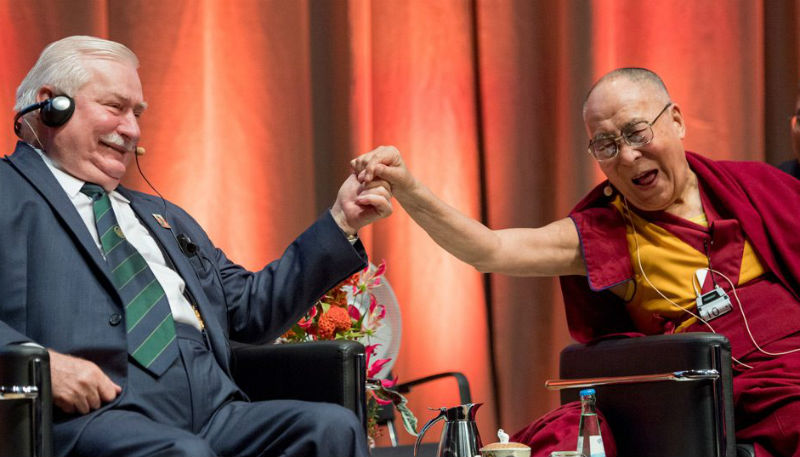 His Holiness the Dala Lama with Lech Walesa, Fellow Nobel Peace Prize Laureate and former President of Poland, during the discussion on non-violence in Darmstadt, Germany on September 19, 2018. Photo: Manuel Bauer

Dharamshala, India — His Holiness the Dalai Lama’s long-envisioned dream of a non-violent, disarmed world and that of a world union akin to the European Union was discussed at a symposium on non-Violence, held at Darmstadt, Germany, on September 19, 2018.

The event was jointly organised by Tibet Initiative Deutschland and Gandhen Phodrang Foundation.

“I always expressed that continents such as Africa and Asia should imbibe the spirit of the European Union. Eventually, our goal is to form a union of the whole world. It is very possible”.

His Holiness was joined by Nobel Peace Prize Laureates Lech Walesa, Rebecca Johnson, founding president of International Campaign for the abolition of nuclear weapons (ICAN) and Claudia Roth, Vice-President of the German Parliament, in a discussion on nonviolence and peace, according to organisers. “The Chinese word, gongheguo (republic), shows some kind of union is there.” He also once again described India as a shining example of a union of multiple religion, languages, scripts and backgrounds.

Making an inspiration of the spirit of the European Union, His Holiness appreciated it for its emphasis on greater collective interest and welfare of the whole of Europe.

“The co-operative spirit could be an inspiration for similar unions in Africa, Latin America and Asia in times to come, contributing to the greater peace and prosperity of the world.”

Since the second world war, he said, the European nations have been taking initiatives and leading the world in pushing forward the idea of non-violence, peaceful co-existence and understanding.

“People in the European continent saw a lot of suffering through war and violence. The desire for peace is now year by year increasing.”

Encouraging dialogue and common interests as solutions to the issues and violent conflicts confronting the 21st century, His Holiness appealed to the public that the world should adopt external disarmament at a global level and inner disarmament at an individual level.

He said that it is our collective responsibility to ensure that the new generations of the 21st century do not repeat the pain and bloodshed of the past. “Because human nature is basically compassionate, I believe it is possible that decades from now we will see an era of peace, but we must work together as human brothers and sisters.”

Lech Walesa, former President of Poland and leader of Solidarnosc movement that overthrew communism, expressed ‘hope’ to see a ‘victorious Tibet’ in his lifetime and said that Tibet and China should find a constructive solution because civilization demands it. “We are stronger together and anyone who is not with Tibet should be ashamed,” said Lech. Rebecca Johnson shared her experiences talking to Tibetans. Sensitizing the strong emotion and determination of the Tibetans. She reiterated that non-violence is not passiveness, Rebecca said: “we should all have solidarity with Tibetans and together, we can make Tibet free.”

Claudia Roth lauded His Holiness the Dalai Lama and the non-violent action of Tibetan people as the biggest gift to humanity. “Dalai Lama and Tibet are very important, they show that peace and non-violence will win over power and violence,” affirmed Claudia.

“His Holiness the Dalai Lama enchants our hearts and bring light when it's dark and dull,” claimed an emotional Claudia.

Vice-President of the German Parliament Claudia Roth also talked about other issues, “We should think seriously what our responsibility is when there is a conflict somewhere. We do have our shared responsibility. Syria and Yemen situation is so bad, violence is worsening. and now there’s an alliance of Saudi Arabia. We should question why we do export weapons to these countries.”

Later during the session, Secretary Tenzin Dhardon Sharling, Department of Information and International Relations, Central Tibetan Administration gave an elaborate and impactful presentation on the non-violent struggle of the Tibetan people. Dhardon Sharling elaborated on how Tibetans have been upholding non-violence as the core principle undermining their struggle. “Whether they are protesting in numbers or alone, singing songs, boycotting Chinese businesses or keeping their languages and identity alive – Tibetan non-violent resistance continues to put China’s rule to test. Their actions remind everyone that nonviolence is not the same as passiveness,” said Dhardon. She called for global support for the Tibetan struggle through real action.

“If Tibetans in Tibet are finding new ways of resistance even after 60 years of oppression, if Tibetans in Tibet who risk arrest and death to carry out their struggle are not losing hope, we cannot either. We need to support them using our freedoms and democratic rights that we have here,” appealed Dhardon. A group of other representatives of other non-violent struggles led by various communities also spoke about non-violence and advocated the idea.