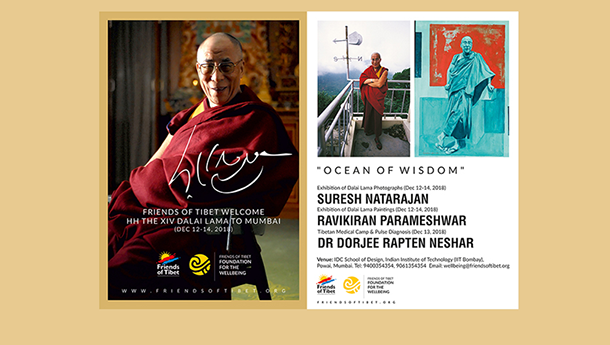 The spiritual leader of Tibet, His Holiness the Dalai Lama. Photo: Friends of Tibet, Mumbai

Mumbai, India — The spiritual leader of Tibet, His Holiness the Dalai Lama will be on a three-day visit to Mumbai city from December 12, 2018. On his visit, the Dalai Lama will address gatherings at the University of Mumbai, Guru Nanak College of Arts, Science and Commerce and the Indian Institute of Technology (IIT) Bombay.

On Wednesday, December 12, 2018, at 10am, HH the Dalai Lama will deliver the Inaugural Address in the International Conference On "Concept of Maitri (Metta) in Buddhism" organised by the Department of Philosophy, The Centre for Buddhist Studies, University of Mumbai. The event will be presided by Prof Suhas Pednekar, Hon Vice-Chancellor, the University of Mumbai and Prof Geshe Ngawang Samten, Vice Chancellor, Central Institute of Higher Tibetan Studies, Varanasi.

On Thursday, December 13, 2018, at 9am, the Dalai Lama will speak on "The Compassion and the Need for Universal Responsibility" at the 11th Silver Lecture at the Guru Nanak College of Arts, Science and Commerce, GTB Nagar, Sion, Mumbai.

On Friday, December 14, 2018 at 10am, His Holiness will address the 22nd edition of TechFest 2018 at the Indian Institute of Technology (IIT), Powai, Bombay. Started in 1998 as a department festival, the Techfest emerged as Asia's largest Science and Technology festival, a conglomeration of scientific thinking and innovation. In the past, TechFest lecture series has featured several renowned personalities — Dr Abdul Kalam, Dr John Nash Jr (Nobel Laureate in Economics), HE Hamid Karzai (Hon former President of Afghanistan), Pranab Mukherjee (Hon Former President) among others.

In order to welcome the arrival of His Holiness the Dalai Lama to Mumbai, Friends of Tibet, a Mumbai-based Tibet Support Group will organise photo and painting exhibitions, film screenings, and the Wellbeing Tibetan Medical Camp in the city. An exhibition of photographs on the Dalai Lama by renowned photographer Suresh Natarajan; an exhibition of paintings by artist Ravikiran Parameshwar and a one-day free Tibetan Medical camp and Pulse Diagnosis by Dr Dorjee Rapten Neshar, Chief Medical Officer, Men-Tsee-Khang, Tibetan Medical and Astrological Institute of HH the Dalai Lama will be held at IDC School of Design, Indian Institute of Technology (IIT), Powai, Mumbai from December 12-14, 2018. Entry will be free and open to all.

His Holiness the 14th Dalai Lama, Tenzin Gyatso, describes himself as a simple Buddhist monk. He is the spiritual leader of Tibet. He was born on 6 July 1935, to a farming family, in a small hamlet located in Taktser, Amdo, northeastern Tibet. At the age of two, the child, then named Lhamo Dhondup, was recognised as the reincarnation of the previous 13th Dalai Lama, Thubten Gyatso. The Dalai Lamas are believed to be manifestations of Avalokiteshvara or Chenrezig, the Bodhisattva of Compassion and the patron saint of Tibet. Bodhisattvas are realised beings inspired by a wish to attain Buddhahood for the benefit of all sentient beings, who have vowed to be reborn in the world to help humanity.

His Holiness began his monastic education at the age of six. The curriculum, derived from the Nalanda tradition, consisted of five major and five minor subjects. The major subjects included logic, fine arts, Sanskrit grammar, and medicine, but the greatest emphasis was given to Buddhist philosophy which was further divided into a further five categories: Prajnaparamita, the perfection of wisdom; Madhyamika, the philosophy of the middle Way; Vinaya, the canon of monastic discipline; Abidharma, metaphysics; and Pramana, logic and epistemology. The five minor subjects included poetry, drama, astrology, composition and synonyms. At 23, His Holiness sat for his final examination in Lhasa's Jokhang Temple, during the annual Great Prayer Festival (Monlam Chenmo) in 1959. He passed with honors and was awarded the Geshe Lharampa degree, equivalent to the highest doctorate in Buddhist philosophy.

In 1950, after China's invasion of Tibet, His Holiness was called upon to assume full political power. In 1954, he went to Beijing and met with Mao Zedong and other Chinese leaders, including Deng Xiaoping and Chou Enlai. Finally, in 1959, following the brutal suppression of the Tibetan national uprising in Lhasa by Chinese troops, His Holiness was forced to escape into exile. Since then he has been living in Dharamsala, northern India. In exile, the Central Tibetan Administration led by His Holiness appealed to the United Nations to consider the question of Tibet. The General Assembly adopted three resolutions on Tibet in 1959, 1961 and 1965.