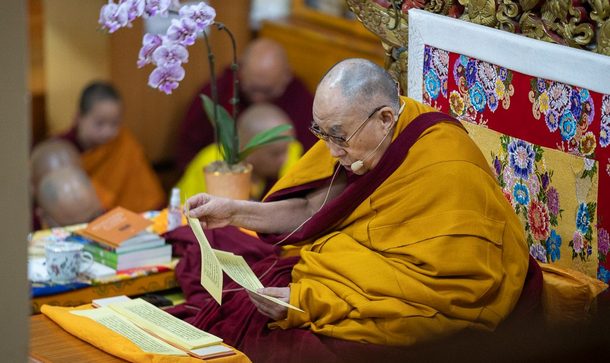 His Holiness the Dalai Lama reading from Bhavaviveka's "Essence of the Middle Way" on the second day of his teachings in Dharamsala, HP, India on February 21, 2019. Photo by Tenzin Choejor

Dharamshala, India — “Now we’ve completed our reading of ‘Essence of the Middle Way’,” His Holiness the Dalai Lama declared on Friday as the reached the end. "I took this text with me to Bodhgaya hoping to give the transmission there, but I was unwell. I’m glad that our efforts here have now been fulfilled."

The spiritual leader of Tibet, His Holiness the Dalai Lama concluded a three-day teaching on Bhavaviveka's "Essence of the Middle Way", in Dharamshala, India, on Friday, February 22, 2019. Approximately 7000 devotees, including more than 2000 monks and nuns, many of them from the Seats of Learning in South India, local Tibetans and about 800 people from 54 other countries joined the three-day teaching sessions at the main Tibetan Temple in Dharamshala, India.

“As Gungthang Rinpoché said, now that you’ve found this precious human life and met with the teachings of the Buddha, especially the teachings of the Nalanda Tradition---manifest in Tibet in the 100 volumes of the Kangyur and 225 volumes of the Tengyur—there is a risk of letting it slip through your fingers without deriving any benefit from it. You need to do what you can to make this life meaningful in order that the next life may be meaningful too. Pray to the Guru to be able to follow the five stage path outlined by the Heart Sutra mantra. Since you have a life with 18 qualities of freedom and opportunity, make it meaningful," he said.

The Buddhist leader said: “As a child I wasn’t interested in studying, but after the age of 10 that began to change. I started to really take interest when I was about 13 and first visited the great monasteries. Thanks to my debate partner, Ngodup Tsognyi, who was very keen to understand the Middle Way or Madhyamaka view, I took closer interest too. So, I’ve been preoccupied by the Middle Way view for about 70 years. Since coming into exile I’ve reflected on it every day."

“To begin with, I used to think that the awakening mind of bodhichitta was admirable, but actually cultivating it seemed too difficult. I told Tagdrag Rinpoché this and he told me he’d been able to develop it and he was confident I could too if I undertook the appropriate meditation," His Holiness said, adding: "When I taught the Great Exposition of Tantra I mentioned that I found the prospect of actually developing bodhichitta daunting. But after receiving an explanation of ‘Guide to the Bodhisattva’s Way of Life’ from Khunu Lama Rinpoché Tenzin Gyaltsen in 1967 I began to understand that it could be done. At that time, Khunu Lama Rinpoché encouraged me to teach the ‘Guide’ as often as I could, which I have tried to do."

“Consequently over the last 40 years I feel I’ve been getting closer to bodhichitta. Don’t think I’ve been idle. I started out as a lazy student, but to spur me on Kyabjé Ling Rinpoché kept two whips, one of which was yellow to be used on his ‘holy’ student. However, I was under no illusions that there would be any difference in the ‘holy pain’ I would feel if he used it.”

His Holiness encouraged his listeners to develop experience of the Dharma through listening, reflecting and meditating on bodhichitta and emptiness day and night. “If you pay attention to them intensely during the day, you’ll dream about them when you sleep at night. It’s said that gaining deeper understanding of these things during the dream state is especially effective. What I can tell you is that if you make the effort you can develop these experiences.

“I don’t have such insight into emptiness that I can remain in absorption on it as accords with the path of preparation, but you can gain such experience by keeping up your effort. As for bodhichitta, what you realize is that you have friends all around you with no enemies as such.

The deeper your experience of the sutra path, the more profound will your practice of tantra be. As Nyengon Sungrab has observed, what was taught in the sutras was the general structure of the path, whereas the tantras, some of which the Buddha taught in the aspect of a monk, but most he revealed in the form of a deity, are specialized teachings. If you develop a good grounding in the general structure of the teachings, you’ll be better able to appreciate the specialized practice of tantra.”

His Holiness prepared to resume reading the text, then reminisced about meeting with Khenpo Kunga Wangchuk. “He was someone who had spent many years in prison in the place where he was born in Tibet. I’d heard that he had the transmissions of the auto-commentary to ‘Entering into the Middle Way’ (Madhyamakavatara) and the ‘Compendium of Valid Cognition’ (Pramanasamucchaya) and felt it was crucial that I receive them from him.

“I also discovered that Khenpo Sangyé Tenzin had the transmission of Kamalashila’s ‘Stages of Meditation’ that he had received at Samyé from a Khampa Lama. Usually I would consult Kyabjé Ling Rinpoché before taking such transmissions, but on this occasion there wasn’t time. In fact, in due course Yongzin Ling Rinpoché gave me Gunaprabha’s ‘Vinaya Sutra’ and told me then that he had passed on to me all the transmissions he possessed.”

“Now we’ve completed our reading of ‘Essence of the Middle Way’,” His Holiness declared as the reached the end. “It’s valuable because it clearly presents the rival views that were propounded in India. I took this text with me to Bodhgaya hoping to give the transmission there, but I was unwell. I’m glad that our efforts here have now been fulfilled."