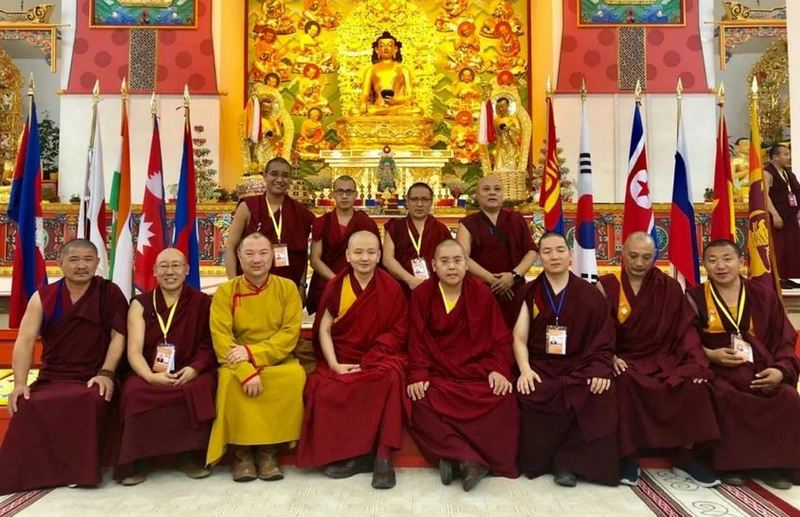 This was despite the absence of Kalon Ven Karma Gelek Yuthok of the Central Tibetan Administration’s (CTA) Department of Religion and Culture, June 23, 2019. The Tibetan Buddhist delegation was led by Ven Thupten Ngodup, the medium of state Nechung Oracle. His Holiness the Dalai Lama’s Honorary Representative Telo Tulku Rinpoche also joined and presented His Holiness the Dalai Lama’s message to the conference on the occasion of the 50th anniversary of the ABCP and spoke during the 2nd-day plenary session dedicated to “Preservation of Heritage and Values.”

The three-day Asian Buddhist Conference for Peace concluded with a resolution being passed after a three-day deliberation on the changes in its chapter, rules, and regulations.

The momentum further grew when in July 1969, the most Ven Sumanatissa of Sri Lanka and the most Ven M. Wipulasara of India and Ven Amirtananda of Nepal visited Ulan Baatar at the invitation of Most Ven Khambo lama Gombojav. In the course of their meeting, they agreed to establish an International Buddhist Organization in Ulan Baatar.

Subsequently, on June 13, 1970, another meeting was held in Ulan Baatar. The meeting was attended by many dignitaries representing India, Sri Lanka, Nepal, USSR, Japan, Vietnam, Malaysia, Singapore and Mongolia.

The Conference principally began as a voluntary movement  of the Enlightened One Lord Buddha’s followers, both monks and laymen, striving to propagate and implement the teachings of the Lord Buddha on peace and harmony, compassion and kindness for all sentient beings on Earth. It aims at bringing together the efforts of Buddhists in disseminating the Buddhist culture, tradition and heritage and thus creating a sense of togetherness among the people of Asia by enhancing  their social, economic and cultural development.

At the 11th ABCP conference that concluded on June 21, Telo Tulku Rinpoche spoke on His Holiness the Dalai Lama’s four main principal commitments and emphasized on how closely linked His Holiness’ views of universal responsibility were in line with the principles of the ABCP.

On the last day of the conference, the board members met for many hours discussing the changes to be made in the chapter and held an election for new Vice Presidents and the General Secretary of ABCP. Once the resolution was unanimously adopted, a closing ceremony was also held followed by a dinner reception and an elaborate cultural performance held in the Battsagan Hall of Gandan Teckchenling Monastery.