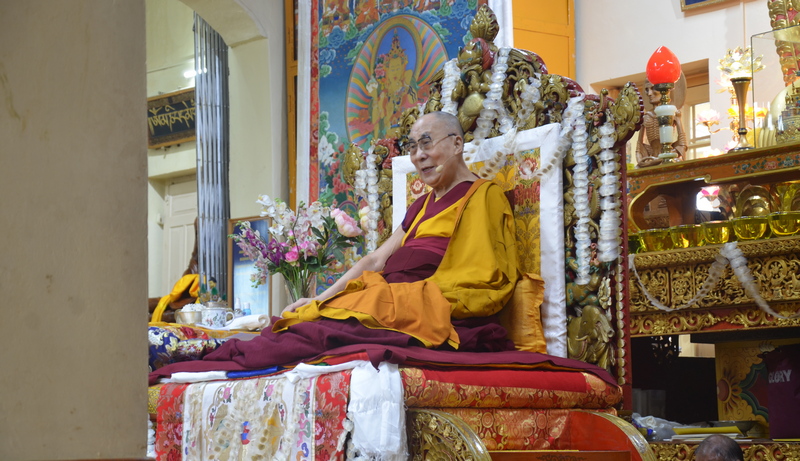 His Holiness the Dalai Lama during a prayer session on his 84th birthday at main Tibetan temple in Dharamshala, HP, India on July 6, 2019. Photo: TPI/Yangchen Dolma

Dharamshala, India — Spiritual leader of Tibet, His Holiness the Dalai Lama who turned 84, on on Saturday, July 6, 2019, left wellwishers across the world delighted on his birthday, as the Nobel Peace laureate released a thank you note to all his devotees, saying that he hopes to celebrate many more birthdays to come.

'If you would like to make me a birthday gift, the best you can do would be to help in fulfilling my three commitments', this was the main message, fans all over the world have heard from His Holiness the 14th Dalai Lama of Tibet on his 84th birthday.

In an official statement issued on July 10, 2019, His Holiness wrote: “I would like to thank you deeply for the warm greetings that many of you have sent me on my birthday, 6 July 2019. I am now 84 years old, but I hope to be able to celebrate the occasion with all of you for many more years to come.”

“I have said before that if you would like to make me a birthday gift, the best you can do would be to help in fulfilling my three commitments—promoting deeper human values based on a sense of the oneness of humanity, with the aim of creating a more compassionate society; encouraging harmony and understanding among the world’s major religious traditions: And preserving the Tibetan language and culture, the heritage Tibetans received from the masters of India’s Nalanda University, while also working for the protection of Tibet’s natural environment.”

“In addition, I am whole-heartedly committed to reviving an appreciation of ancient Indian knowledge among young Indians today. We need to incorporate compassion and warm-heartedness into our modern education system to make it more holistic. Much of the turmoil we witness across the world occurs because people are overwhelmed by disturbing emotions that can be difficult to tackle.”

“I believe that the rich understanding of the workings of the mind and emotions that we find in ancient Indian traditions remains relevant today. There would be great value in examining and applying this as a basic human discipline, and not from a religious point of view. Just as we teach physical hygiene to stay physically fit, we need to cultivate emotional hygiene, learning to tackle our destructive emotions, so as to better achieve peace of mind.”

“Wherever I am, I share these ideas with anyone who wishes to listen. If you would like to help, I would be grateful if you could do the same.”