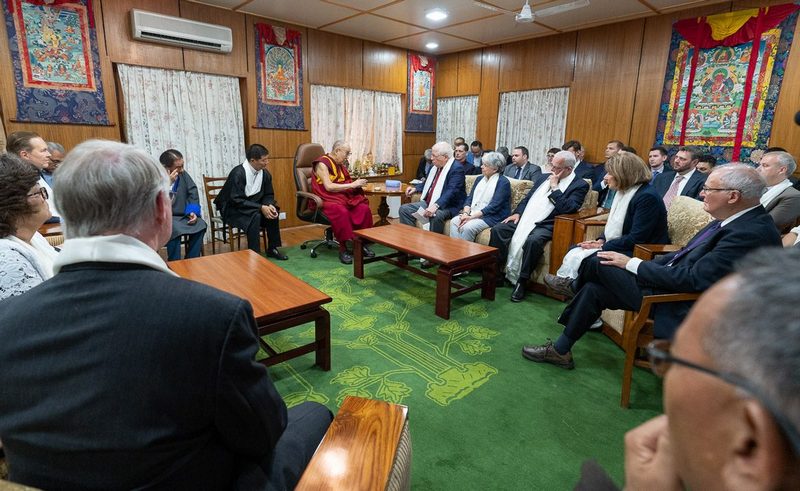 Dharamshala — A U.S. Congressional delegation traveled to Dharamshala, India to meet with His Holiness the Dalai Lama Saturday in an effort to build our friendship and partnership and to draw attention to the human rights situation in Tibet.

The delegation received a special audience with His Holiness the Dalai Lama at his residence in Dharamshala, India, on August 3, 2019. Led by Congressman and Chair David Price and Vice-chair Vern Buchanan, the delegation engaged in hour-long interaction and discussion with His Holiness followed by a luncheon reception with the Tibetan leader.

Congressman David Price remarked that the meeting with His Holiness in Dharamshala is one of the best take away of their official tour to East Timor, Indonesia and Dharamshala . He and the delegation were greatly inspired by His Holiness’s profound wisdom.

He also expressed that the visit to Dharmashala will be the most memorable one also because of the love and respect shown by the Tibetan government in exile and the Tibetan parliamentarians.

He once again assured to support the democratic Tibetan government in exile.

“Above all, we wanted to pay our respect and express our gratitude to His Holiness the Dalai Lama and the Tibetan people for the inspiration they have been to us and the entire world”, said Congressman David Price.

Congressman and Vice-chair Vern Buchanan chimed in with Congressman Price and expressed his gratitude for the warm hospitality exhibited by Dr Lobsang Sangay, President of the Tibetan government in-Exile and the parliamentarians of Tibetan parliament in exile led by Speaker Pema Jungney.

“Our goal is to build our friendship and partnership that we have built over many years and to take that relationship to another level”, affirmed Congressman Buchanan while remarking on the wonderful experience he had so far.

He also established that the Congressional delegation from both parties is happy to work closely with His Holiness the Dalai Lama and his vision for the future.

For the Tibetans inside Tibet, Congressman Vern Buchanan said they should take pride in their leadership and forever remember that His Holiness is a great inspirational figure to the entire world.

President Dr Lobsang Sangay signified the delegation visit to Dharmashala as a significant milestone where the political event of the Tibetan government in exile is concerned.

“I want to extend my heartfelt gratitude to the delegation for visiting us”, said, President Dr Sangay.

He also notified about the remarkable heartwarming statement given by the delegation that is, “Even though physically we are departing from each other but spiritually we will remain intact and will continue to support the Tibetans and Tibet cause”.

His Holiness fled Tibet in 1959 and took exile in India, where he lives to this day. During the meeting, His Holiness said he has "a critical view of the existing education system, which very much oriented about material values. We should include in education how to bring inner peace, without touching religious faith, but secular way.”