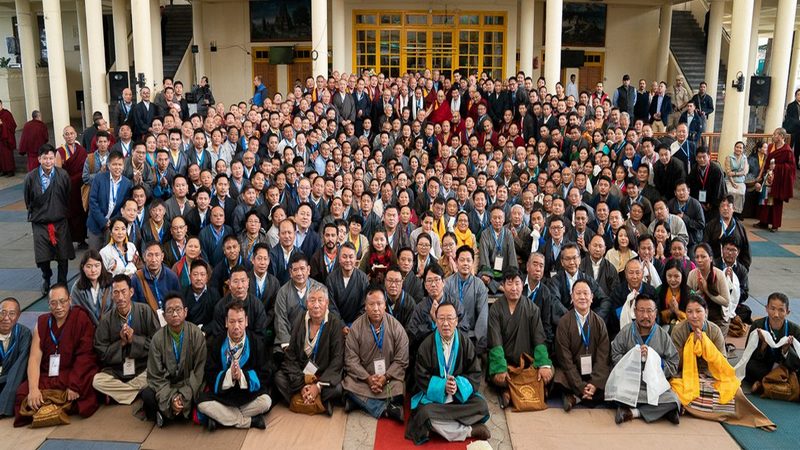 His Holiness the Dalai Lama with the delegates of the third special general meeting at main temple, 6 October 2019. Photo/OOHDL

Dharamshala, India — The younger generation of Tibetan people to continue to uphold the unity and integrity of the nation as done by the elder generation, said His Holiness the Dalai Lama during a special audience to the delegates of the 3rd Special General Meeting, recently held in Dharamshala, India.

His Holiness the Dalai Lama granted a special audience to the delegates of the 3rd Special General Meeting and CTA staff led by the representatives of the three pillars of Tibetan Democracy and the Kalons of various departments at the main Tibetan temple in Dharamshala, India, Sunday morning.

The special general meeting was jointly organised by the Kashag and Tibetan Parliament-in-Exile and the meeting concluded on Saturday, attended by around 350 Tibetans from as many as 24 countries.

The three-day historic event participants from 24 countries, including Tibetan representatives of the three pillars of Tibetan democracy: The Kashag; Tibetan Parliament-in-Exile and Tibetan Supreme Justice Commission, the five major schools of Tibetan Buddhism and the Tibetan diaspora, unanimously passed four resolutions, declaring "the six million Tibetan’s earnest prayers for the 14th Dalai Lama to reincarnate as per the Tibetan Buddhist tradition and rejecting outrightly China’s preposterous interference in the sacred institution of Tibetan reincarnation."

Speaking to the gathering about the importance of the Tibetan language, His Holiness said, “the Tibetan language serves as a great ornament to study great Buddhist texts containing abysmal knowledge about logic, philosophy, and epistemology”.

He hailed the great scholars of Tibet who excelled in the wisdom of philosophical knowledge and writings and lauded the determination of the Tibetans inside Tibet who are rigidly opposing every effort made by the Chinese authorities to eliminate Traditional Tibetan identity, who risk arrest and death to carry out their struggle.

“Tibetans have gone through gut-wrenching hardship of 1959 and the subsequent escape into exile yet we have not lost a speck of hope,” remarked His Holiness while he extolled the determination and commitment of his people. His Holiness also noted that Tibetans in exile have also been a great part of this struggle for truth.

His Holiness stressed the younger generation to continue to uphold the unity and integrity of the nation as done by the elder generation. “In the last 60 years, we have become refugees, unlike any other refugees. We have not only preserved our culture and tradition we are now promoting them to the outside world” said His Holiness.

He further claimed that Tibetans inside Tibet are to be credited for their undying spirit of courage and determination and likewise, those living in the free country who are using the opportunities of the freedom are also to be credited for Tibetans' success story.