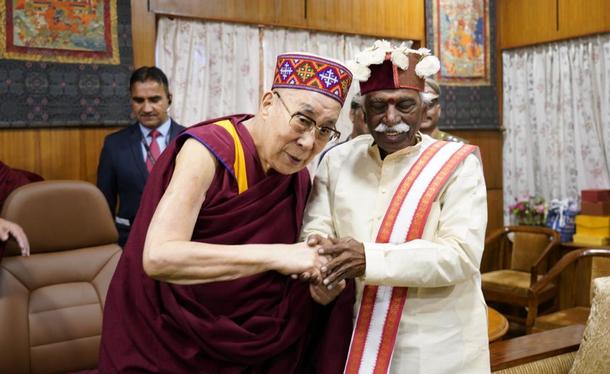 His Holiness the Dalai Lama and H.P. Governor Bandaru Dattatreya during the audience at His Holiness’ residence, Dharamshala, India. November 18, 2019. Photo/OHHDL

Dharamshala, India — Governor of Himachal Pradesh, Bandaru Dattatreya met the spiritual leader of Tibet, His Holiness the Dalai Lama on Monday morning at his residence in Dharamshala, India. In the meeting, His Holiness discussed India's ancient culture, tradition, glorious history, especially the affection and contribution towards their comfort from the people of Himachal Pradesh.

A messenger of India and student of Nalanda tradition, as he often refers to himself, His Holiness the Dalai Lama warmly greeted the Governor of Himachal Pradesh and the two engaged in a productive discussion mainly over the relevance of ancient Indian tradition in promotion of peace of mind and the potential contributions of Tibetan Buddhist masters and institutions in the revival of the tradition.

His Holiness expressed the tremendous gratitude and respect Tibetans hold for India as the source of their spiritual culture and their second home.

It is due to India’s consistent generosity and kindness that the Tibetan people have been able to preserve their ancient cultural heritage in exile. He further noted the positive cultural and civilizational influence the traditions of Nalanda University brought to Tibet from the eighth century.

“The age-old Indian traditions of non-violent conduct ‘ahimsa’, compassionate motivation ‘Karuna’, along with a thorough understanding of the workings of minds and emotions, are not only relevant but are also necessary in today’s world,” His Holiness told the Governor.

His Holiness observed that the ancient tradition would not only benefit the people of India but would contribute to the development of the world as a whole.

These relevant ideas derived from Tibetan Buddhist philosophy, which in turn have originated from the Nalanda tradition, combined with modern education could serve the wider benefit of humanity.

Moreover, His Holiness alluded to the growing interest in the Tibetan Buddhist philosophy and logic from the West, particularly scientists and educationists as signs of positive hope that “India can make a significant contribution regarding peace of mind for the whole humanity.”

His Holiness also extended his profound gratitude to the government and people of India for hosting the Tibetan people with warmth and generous hospitality.