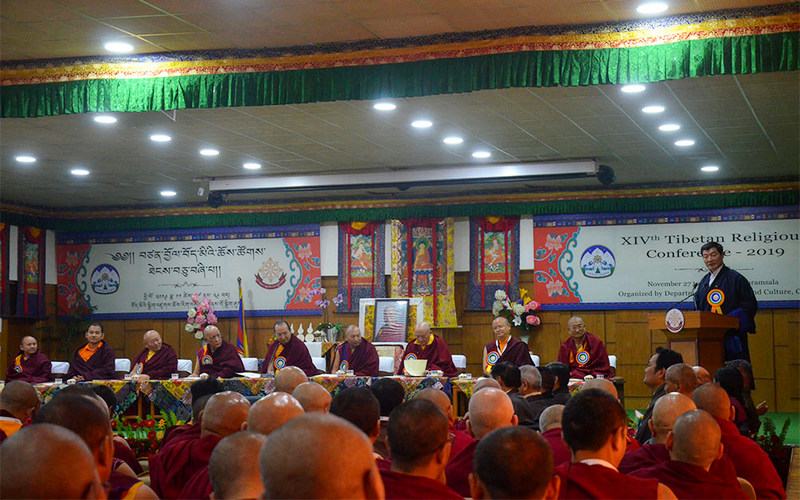 Dharamshala, India — The Chinese communist regime's interference in recognizing the 15th Dalai Lama of Tibet is a violation of international law and freedom of religion, the political leader of Tibet said during the first day of the 14th Tibetan religious conference, held in Dharamshala, India.

The communist China who regards religion as poison now intends to uptake the responsibility to recognize 15th Dalai Lama against the will of every Tibetan people, he stresses.

The first day of the Tibetan religious conference initiates over by Yuthok Karma Gelek, the minister of religion and culture, CTA, welcoming everyone. He further takes the podium to clarify certain needs for the title of the conference. He points out two reasons, how the religious representatives from Tibet are unable to attend due to unavoidable circumstances and to avoid misunderstanding of exclusion of any Buddhist tradition.

He addresses the mass by stressing the bond between Tibetans and His Holiness 14th Dalai Lama of Tibet being unbreakable. How the Chinese communist government which has regarded religion as a poison let the enormous destruction of the monasteries and Buddhist scripts now interfering with the reincarnation of H.H the Dalai Lama, he adds.

A religious matter should be left in the hands of its followers and the religious head not to outsiders let the communist china who doesn’t believe any religion, he strongly delivers. Since 2007, the Chinese communist party had recognized 300 Rinpoches and 800 lamas in 2016, as of now around 1,300 communist accepted reincarnations of lamas, Rinpoches are there, he adds.

He recalls his encounter with one of the Indian reporters in New Delhi who with other nine reporters from well known Indian news agency were invited to Tibet for one-week sponsored by the Chinese communist China. After the tour of reporters to Tibet, in nine of the Indian newspapers, it was written that the reincarnation of the 15th Dalai Lama of Tibet would be carried by the communist China and warned India not to interfere.

The reincarnation of lamas by the respective sects is a unique tradition of Tibetan Buddhism and the interference from a political group who never believes in any religion in the first place is a violation of freedom to religion, he points out. The Chinese communist intervention in Tibetan religious matter is wrong in case of international law and a violation of one’s freedom to practice religion, he states.

The more than 8000 years old tradition of selecting lamas and Rinpoche should solely be in hands of religious figures not in the hands of some politicians for fulfilling some political agendas, he stresses.

Sikyong also talks about the spread of Buddhism around the world in one hand and on the other, the ever-decreasing number of believers each year. A large numbers world population being non-believers especially the new generation, he says.

His Holiness the 42nd Sakya Trizin Ratna Vajra talks about the importance of unity among the major Tibetan school of Buddhism and consequently respecting every followers of the faith. He further emphasizes the importance of physical and mental hygiene in order to achieve one’s goals. With a healthy body and mind one will be able to perform much better in everyday life, he continues.

Creating a better environment for monks and nun at the monasteries to vigorously study and develop their mends, he adds. The Tibetan Buddhist traditions of all sects are still flourishing well and it is mainly because of the graces of H.H 14th Dalai Lama and all the elders who have contributed all their life to preserve the unique traditions, he emphasizes. He thanked all the scholars and elders contribution to Tibetan Buddhism since the beginning of the exile years.