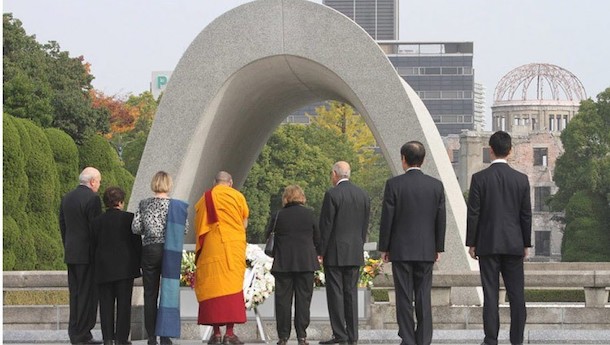 His Holiness the Dalai Lama and fellow Nobel Laureates paying their respects at Hiroshima Memorial Park in Hiroshima, Japan on November 14, 2010. Photo by Taikan Usui

Dharamshala, India – Spiritual leader of Tibet, His Holiness the 14th Dalai Lama released a statement on the 75th anniversary of the Hiroshima atomic bombing, calling for recognition of the oneness of humanity and action to construct a more peaceful world.

"On the occasion of the 75th anniversary of the atomic bombings of Hiroshima and Nagasaki, I take the opportunity to urge governments, organizations, and individuals to rededicate themselves to making the achievement of peace the centerpiece of our lives," reads the statement.

The statement emphasises that a chance to make this century a more peaceful century in the increasingly interdependent world. "Despite many great developments that also took place, the 20th century was an era of violence in which some 200 million people were killed, including the horrific use of nuclear weapons. Now, in our increasingly interdependent world, we have a chance to make this a more peaceful century."

The 85-year old Nobel Peace Laureate has expressed his concerns about the world problems caused by humans' violent behaviors or actions. "When conflicts arise they should be settled through dialogue, not the use of force."

"We need to eliminate the threat of nuclear weapons, with the ultimate aim of a demilitarised world. War means killing. Violence leads to counter-violence. We need to put an end to combat and the production of weapons and construct a more peaceful world," said the spiritual leader of Tibet.

The statement also emphasises that viewing our fellow beings in terms of ‘us’ and ‘them’, there will be a tendency to try to destroy them, even using nuclear weapons, undermining world peace. "We human beings have created many of the problems in today’s world."

"As long as we have strong negative emotions and we view our fellow beings in terms of ‘us’ and ‘them’, there will be a tendency to try to destroy them. We must recognise the oneness of humanity, and understand that we will not achieve peace merely through prayer; we need to take action," the statement concludes with his prayers.

While opening his third day of teachings to young Tibetan students, His Holiness also reminded them that 6th Aus is the 75th anniversary of the atomic bombing of the Japanese city of Hiroshima. “At the end of the Second World War, atomic bombs were dropped first on Hiroshima and three days later on Nagasaki."

"I have been to both places. In Hiroshima, near to where the bomb exploded stand the ruins of a building, the Genbaku Dome, or the Hiroshima Peace Memorial. You can see where parts of the steel girders of the dome were melted by the intense heat. I’ve met survivors, some of whom were severely burned," he stressed.

“I’ve also been to Nagasaki. When you see what was the epicenter of the explosion, it feels very unsettling. War is driven by anger, by the urge to eliminate the enemy, and yet otherwise it’s basic human nature to be compassionate" he said.

“I dream of a demilitarised world, a world free of nuclear weapons. Today, on the 75th anniversary of the destruction of Hiroshima we must remember that in order to bring about peace in the world," he further said, adding: "we need to cultivate peace within ourselves".

The Nobel Peace Laureate emphasises as saying, "We need to settle conflicts and disputes through dialogue and negotiation. Just as we don’t want suffering, we should not inflict suffering on others. When there is discord between members of a family, other relatives do what they can to resolve the conflict.

“In our interdependent globalized world, the idea of eliminating our enemies is completely out of date. “It’s important to remember what happened on this day 75 years ago. I’ve been there and it’s unbearably moving. We must work to free the world of these awful weapons and create true and lasting peace."

“At a time when we face increasing natural calamities, as well as the threat of global warming, to maintain a fervent longing for such weapons is absurd. Here in India, we are familiar with the practice of ‘ahimsa’ and ‘karuna’, non-violence and compassion — they should be our guide," His Holiness added.