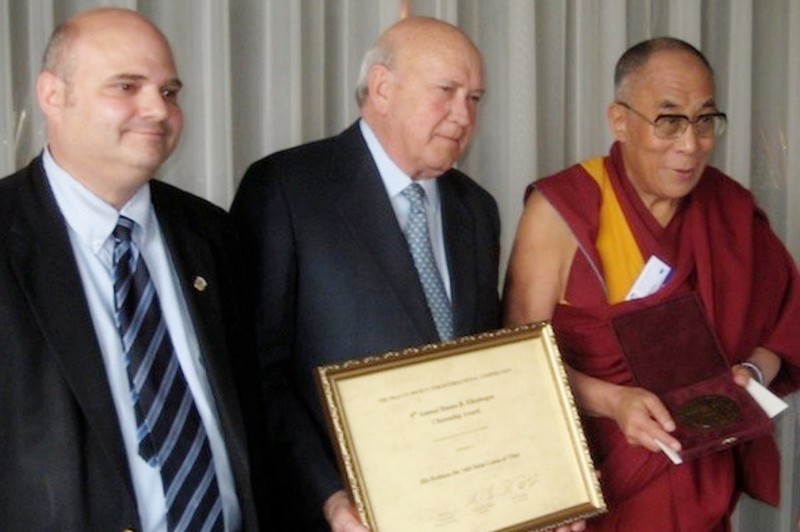 Dharamshala - His Holiness the 14th Dalai Lama of Tibet expressed his condolences on the demise of F.W. de Klerk, former President of South Africa, who played an important role in South Africa's history, especially in transforming the country into a democratic state.

South Africa's last apartheid president, F.W. de Klerk, who helped end the country's system of white minority rule and who shared the Nobel Peace Prize with Nelson Mandela for this work, died on Thursday at his home near Cape Town. He was 85 years old.

Following the passing away of former South African President FW de Klerk, His Holiness the Dalai Lama has written to his widow, Mrs Elita de Klerk, to express his deepest condolences.

"I also appreciate that he oversaw the dismantling of South Africa’s nuclear weapons program," the Nobel Peace Prize Laureate added in his written tribute to the family.

“Over the years, we had the opportunity to meet at various forums in our collective efforts, as Nobel Peace Laureates, to promote better understanding among nations and peoples with the intention of building a safer, more peaceful world,” added the spiritual leader of Tibet.

"Although he is no more, we can take comfort from the fact that your husband lived a meaningful life," His Holiness wrote in the concluding letter.

A statement from Archbishop Desmond Tutu's office acknowledges the complexity with which de Klerk will be remembered, but also honours his role in the country's transition to a democratic nation.

“He was jointly awarded the Nobel Peace Prize with Mandela for his contribution to setting South Africa on the road to peace and justice,” the statement said, adding, “to the family of the late president, we extend our deepest condolences. May he rest in peace and rise in glory.“

Matamela Cyril Ramaphosa, President of South Africa said Thursday he and the government were saddened by the death of de Klerk. De Klerk had played a "key role in ushering in democracy" in the country, Ramaphosa said, expressing his condolences to the former president's family.

"It is with the deepest sadness... former President F.W. de Klerk died peacefully this morning at his home in Fresno after his struggle with mesothelioma cancer", the F.W. de Klerk Foundation announced.

“Mr De Klerk was 85 years old. He is survived by his wife Elita, his children Jan and Susan and his grandchildren. The family will, in due course, make an announcement regarding funeral arrangements,” the foundation further added.

de Klerk was leader of the National Party and led an apartheid government from 1989 until the dawn of democracy in South Africa in 1994.

While in office, de Klerk initiated and led the inclusive negotiations that led to the adoption of South Africa's first fully democratic constitution in December 1993. He also received the Nobel Peace Prize in 1993 along with former President Nelson Mandela.

Following the elections of 27 April 1994, de Klerk served as one of South Africa's two executive deputy presidents until 1996, when his party withdrew from the government of national unity.