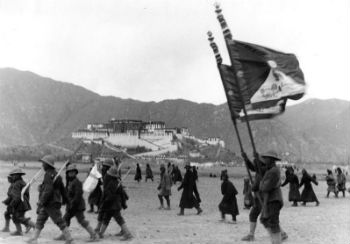 There is some uncertainty over the precise date, but it was apparently on October 7th that units of the Chinese so-called People’s Liberation Army crossed the River Yangtze into Kham, the eastern province of Tibet in the foothills of the Himalayas.

Varying estimates put their numbers at 40,000 or more than 80,000, but either way they were in overwhelming strength. The invasion had been planned in detail by Deng Xiaoping, a future Chinese premier, and two other senior Communist officials in China’s Southwest Military Region.

The rest of the world was preoccupied with events in Korea at the time, but the Chinese Communist regime had been announcing its intention of integrating Tibet with ‘the motherland’ for months.

The Tibetan government in Lhasa, which had appealed for help in vain to both Britain and the United States, declined to receive Chinese emissaries, though a Tibetan delegation in India held inconclusive talks with the Chinese ambassador there.

The Chinese Communist regime began their invasion of Tibet in 1949, reaching complete occupation of the country in 1959. Since that time, more than 1.2 million people, 20% of the nation's population of six million, have died as a direct result of China's invasion and occupation.

In addition, over 99% of Tibet's six thousand religious monasteries, temples, and shrines, have been looted or decimated resulting in the destruction of hundreds of thousands of sacred Buddhist scriptures.

To this day Tibet remains an independent state under illegal occupation.

Articles about the Topic How did China illegally occupy Tibet?

Make a subscription or a donation to TPI

Tibet Photos of the Week: The illegal occupation of Tibet turns 60

Spiritual leader of Tibet with supporters and special guests

Ambassador Kenneth I. Juster with His Holiness the 14th Dalai Lama, in Dharamshala, India. Photo: File

We have been a victim of China's occupation of Tibet: Tibetan President

Exhibition in Taiwan: "Beyond Territory'brings the art of different artists across Asia