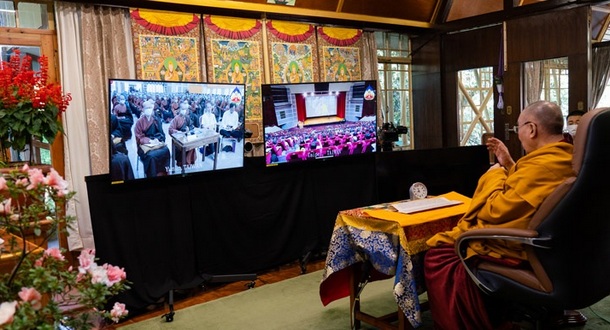 His Holiness the Dalai Lama speaking to the virtual audience in Taiwan on the third day of teachings from his residence in Dharamsala, HP, India on October 4, 2020. Photo by Ven Tenzin Jamphel

His Holiness again offered his greetings to the virtual audience gathered in Taipei, the Capital of Taiwan at the start of the final day of his three-day teaching from his residence in Dharamshala, HP, India on October 4, 2020.

“Today I’d like to greet you all,” so saying His Holiness the Dalai Lama began the third day of his explanation of Tsongkhapa’s ‘Essence of True Eloquence’ primarily for Taiwanese Buddhists. “The prayer you say at the end of the ‘Heart Sutra’ says ‘May I ... enter into the practices of a bodhisattva’. Perhaps this should be more of a determination than just a wish, ‘I will enter into the practices of a bodhisattva’.

“However deep experience of emptiness you may have, it will not enable you to overcome the obstructions to knowledge. To do that you also need bodhichitta. ‘Entering into the Middle Way’ pays homage to compassion because compassion at the beginning is the seed of the attainment of Buddhahood. In the middle compassion is the factor that increases bodhichitta and when you attain Buddhahood, it prompts you to serve others.

“Combining bodhichitta with the wisdom understanding emptiness you will overcome all defilements, obstacles to knowledge, and afflictive emotions. When you see sentient beings suffering, you’ll be unable to bear it and will work to help them.
“We’ll resume reading the text. Towards the end, there is an examination of the assertions of the Autonomous Middle Way proponents and then the assertions of the Consequentialists. In his ‘Praise to the Buddha for Teaching Dependent Arising’ Jé Tsongkhapa writes, because of the reasoning of dependent arising we do not rely on either of the extreme views. Dependent arising is the most significant teaching of the Buddha.”

His Holiness alluded to four logical fallacies that, in his ‘Entering into the Middle Way’, Chandrakirti explains would ensue if things had objective existence. They are that the Arya being's meditative absorption on emptiness would be the destroyer of phenomena; that it would be wrong to teach that things lack ultimate existence; that the conventional existence of things would be able to withstand ultimate analysis into the nature of things, and that it would be untenable to state that things are empty in and of themselves.

His Holiness disclosed that he reflects on these four points every day in his meditation. Whether you think of the self of persons, consciousness, or whatever, he went on, everything appears to have some kind of objective, independent existence. When the object of negation appears to your mind and you wish to refute it, you’re conducting an analysis of how things exist.

“Today is the second day of these teachings,” he began. “We don’t need to use reason to prove that we want to be happy, not to experience suffering. The root of suffering is our self-cherishing attitude and our misconception of the true existence of people and things.

“These poisons or mental afflictions are rooted in ignorance, which will not be eliminated by saying prayers or reciting mantras, but by meditating on selflessness, that is, developing wisdom. The final line refers to cultivating bodhichitta and engaging in the practices of bodhisattvas.

“The reason we’re listening to this discourse today is so our wisdom may shine forth. However, there is a saying that if, after diligent study, you have not been able to integrate what you learned within you, it won’t have served the purpose. Trulshik Rinpoché, who came to Lhasa especially to receive teachings on the ‘Stages of the Path’, used to tease me about the great knowledge of Geshés that bore no fruit.

“I advise Tibetans to become 21st century Buddhists and I advise you to do the same, which means developing a sound understanding of the teachings. You need to use your intelligence to discern right from wrong and examine how spiritual practice can be of benefit today.

“As I mentioned yesterday when I was small, I memorized ‘Entering into the Middle Way’ and ‘Ornament for Clear Realization’. I studied ‘Collected Topics’ logic and reason on the basis of Purba Chok’s textbook. To begin with, it didn’t interest me very much, but later I realized that what I had learned was useful.

“Today, dharma friends in Taiwan have asked for an explanation of ‘Essence of True Eloquence’,” he announced during the first day of his teachings. “I’ll give a brief teaching.

“The main message of all religious traditions is that it is important to cultivate a warm heart, love, and compassion. The practice of non-violence and compassion prevailed in India even before the time of the Buddha. When he appeared, more than 2500 years ago, he took up these practices and made them the basis of his teaching. Followers of theistic traditions attribute what happens to us to the will of God, whereas non-theistic Samkhyas, Jains, and Buddhists follow the law of causality.

The Buddha advised his disciples to be sceptical: “As the wise test gold by burning, cutting and rubbing it, so, bhikshus, should you accept my words - only after testing them, and not merely out of respect for me." His Holiness asked, “How do you examine the teaching?” answering that you check it by comparing it with what you know to be evident, with what can be proved by reason.

"In the modern era, scientists are not much interested in systems of belief, but they will pay attention to what is presented in terms of reason and logic. His Holiness reported that he has found modern scientists quite prepared to entertain Buddhist explanations of the workings of the mind and emotions," he said.

"Because they are grounded in logic and reason, which is characteristic of the Nalanda Tradition. He observed that Chinese Buddhists also revere the Nalanda Tradition and that the Chinese scholar Xuanzang records that he spent time at Nalanda University," the spiritual leader added.